Please ensure Javascript is enabled for purposes of website accessibility
Log In Help Join The Motley Fool
Free Article Join Over 1 Million Premium Members And Get More In-Depth Stock Guidance and Research
By Adria Cimino - Apr 7, 2021 at 7:00AM

And here's when the company may benefit...

Right now, most people rolling up their sleeves for an authorized coronavirus vaccine are adults. The U.S. Food and Drug Administration (FDA) has granted Emergency Use Authorization (EUA) to Moderna (MRNA 2.27%) and Johnson & Johnson vaccines for people age 18 and older. Only Pfizer (PFE 1.62%) has the right to use its vaccine in some minors -- those age 16 and older. That's due to the age of volunteers Pfizer recruited in its trials.

But soon the FDA may authorize a vaccine for more teens and younger children. Last month, Moderna and Pfizer both announced the start of clinical trials in kids ages six months through 11 years old. Both already had started teen trials.

Now, a third company is about to try for this billion-dollar market. 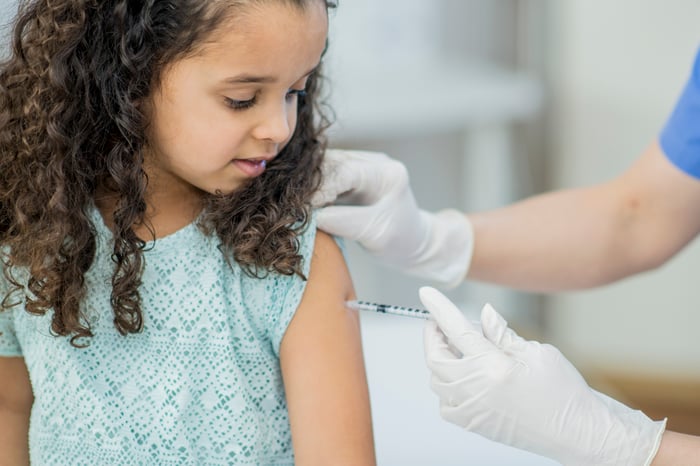 The third to market?

I'm talking about Novavax (NVAX -4.04%). The biotech company said this week that it plans on expanding its U.S. phase 3 trial in the second quarter to include "pediatric and adolescent arms." If all goes smoothly, we might expect Novavax to be the third to enter these markets after Moderna and Pfizer.

But is there room for all three players? First, let's consider the near term. By that, I mean the school year beginning in autumn 2021. Due to the timing of the Pfizer and Moderna trials, it's possible both companies can serve the U.S. teen market by that time. Pfizer reported positive efficacy results in teens last week. And Moderna has said it aims to report results in that group this spring.

But even if Novavax begins its teen trial today, I wouldn't expect it to get a nod from the FDA this summer. The company will need months to recruit and dose participants and analyze the data. So, Novavax won't be a player in this market in the near term. Instead, it will have to carve out a share of the teen market later on.

The good news is that some individuals may become eligible for vaccination throughout the year due to birthdates and other factors. That offers opportunity for later-to-market vaccine makers to sell their products at any point. Still, it's clear that Novavax's biggest opportunity in the teen market may be during the weeks leading up to the fall 2022 back-to-school period. Many parents think of vaccinations at these times.

As for the children's market, it's unlikely that any of the three players will be ready by the upcoming back-to-school period. The Pfizer and Moderna trials only began recently. And, as mentioned above, Novavax hasn't yet started testing its candidate in this group. Still, if Pfizer and Moderna don't meet any roadblocks, they likely will reach the finish line ahead of Novavax.

But that's OK. Again, Novavax will grow market share in the longer term.

Why am I so convinced this is true? Let's look at some data. There are about 2 billion children aged 14 or younger in the world, according to Statista. Vaccine makers will eventually aim to vaccinate kids and teens in the U.S. and beyond. So, from a global perspective, we're looking at about 4 billion doses of vaccine. That's because most of today's vaccines involve two doses.

And the world population -- including kids and adults -- totals more than 7.8 billion. This means we need more than one vaccine maker to satisfy worldwide demand. Pfizer and Novavax each have vaccine capacity of about 2 billion doses annually. And Moderna aims to produce as many as 1 billion doses.

Novavax's plan to start testing its vaccine on minors soon is a key part of its overall vaccine strategy. But the fact that the biotech company may miss out on the first big wave of sales in these markets isn't a catastrophe. Vaccinating kids and teens helps populations reach herd immunity, so it will remain important into the future. This is positive for Novavax's long-term revenue prospects -- and its stock price.