Please ensure Javascript is enabled for purposes of website accessibility
Log In Help Join The Motley Fool
Free Article Join Over 1 Million Premium Members And Get More In-Depth Stock Guidance and Research
By Reuben Gregg Brewer - Apr 7, 2021 at 10:39AM

The company announced plans to raise some capital, but investors were likely looking at something else today.

Shares of real estate investment trust CoreCivic (CXW 1.94%) fell roughly 10% in the first half hour of trading on April 7. While there was news out of the company, it was likely the news out of competitor The GEO Group (GEO 3.79%) that put investors in a selling mood.

Both CoreCivic and The GEO Group own and operate prisons. The current administration in the White House has taken a dim view of for-profit companies running these facilities and has ordered the Department of Justice to stop using them. While that's only a portion of the customer base for both names, the decline has already started to show in contracts with the Federal Bureau of Prisons and U.S. Marshals Service being canceled or expiring without renewal. And The GEO Group announced today that it is suspending its dividend so it can pay down debt -- there's probably a link. There is a dark cloud lingering over the for-profit prison space, and this announcement made investors just a little more worried than they were before. 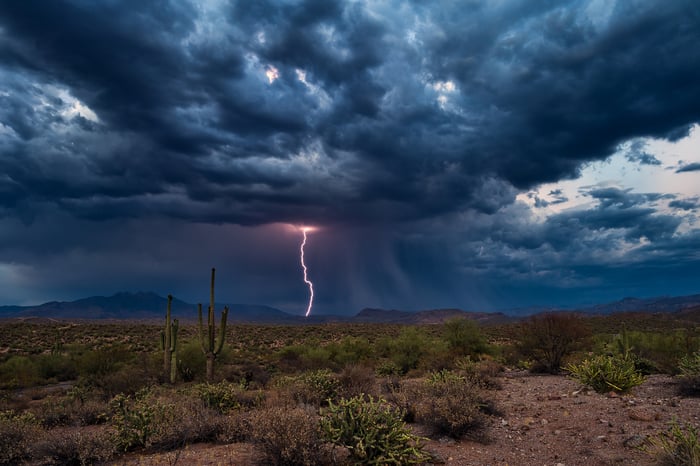 So the drop in CoreCivic is most likely a spillover from the trading action in The GEO Group, which was down as much as 19% in early trading. However, CoreCivic did announce today that it will be issuing $400 million worth of bonds. The proceeds will be used to pay off some near-term maturities, effectively extending the company's debt maturity profile. That's a good thing, in general, though it remains to be seen what interest rate CoreCivic is going to pay to the buyers. The new debt is replacing bonds with interest rates of 5% and 4.625%. Although interest rates are still hovering near historic lows, the company's business position is likely less desirable today than it was when it issued the debt it is replacing. Investors should pay close attention to the announcement on that front.

CoreCivic is in the middle of a transition, looking to shift from being a REIT to being a regular corporation. On top of that, it is dealing with the federal government's changed view of for-profit prison operators. Most investors would probably be better off on the sidelines until at least one of these issues is resolved, if not both. There's likely to be a lot of uncertainty here for a little while.