America's largest meat processor has more than its market cap to rehabilitate.

Despite a tumultuous 2020 for Tyson Foods (TSN 1.38%), it managed to deliver earnings growth by playing a crucial role in securing US food supply. However, these efforts were overshadowed by the horrific behavior of key managers at the company's largest meat processing facility, which resulted in the termination of 7 managers. With justice slowly but surely in progress, the company aims to reshape its culture and move forward. Understandably, some investors may avoid this stock for the company's alleged misdeeds, but its earnings and deflated multiple make for a solid portfolio candidate. 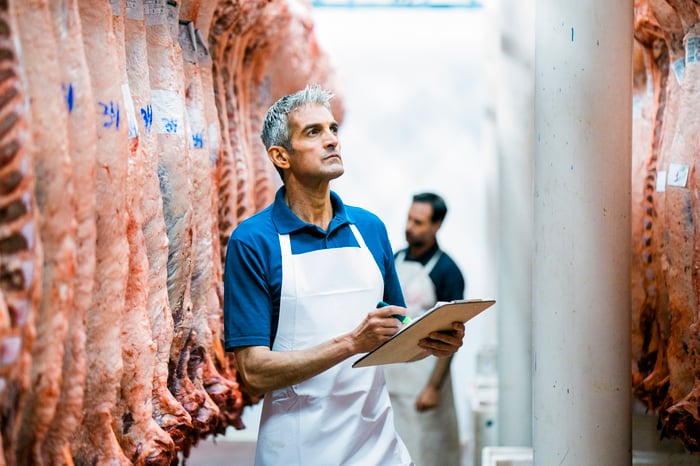 It's an essential business

Despite serious operational difficulties in 2020, including facility closures, Tyson's earnings never actually dipped into loss territory. For the calendar year, it delivered $5.92 per share, up 6.9% from 2019.

Sales growth between the segments remained steady, but overall operating income rose. Beef was the standout, adding 46.7% more operating income in 2020 as the company benefited from favorable cattle feed costs, plus lower commercial costs due to strong retail demand, where the company can command higher margins than in its high-volume food service business. As beef is Tyson's largest segment, this added a favorable boost to overall earnings.

Following the shutdown of Tyson's largest facility in Waterloo, Iowa, the Trump administration invoked the Defense Production Act to assign "essential" status to the company, amid food security fears across the US. This compelled companies like Tyson to resume operations -- a key tailwind in the face of a dire situation. Curiously, the meatpacking industry did forward a note to the US Department of Agriculture that was similar in form to the final orders, which perhaps nudged the administration along. To comply with CDC directives, Tyson incurred over $500 million in COVID-related costs, mainly associated with protecting employees, restricting further earnings growth.

Workers' unions strongly opposed the reopening amid reports of misconduct by key management at Tyson Foods. It's alleged that seven managers, who have now been removed, were making bets on the number of COVID cases in the company's workforce. The dismissals came after an independent investigation, commissioned by the company and led by former Attorney General Eric Holder.

These managers' behavior was symptomatic of a much larger disregard for employee welfare, with local manager John Casey instructing a supervisor to ignore COVID symptoms in employees. Decisions like these ultimately led to over 10,000 employee infections at 26 Tyson plants, with 1,000 at the Waterloo, Iowa plant alone; the disease killed six Waterloo workers.

Since then, the company has sought to overhaul its processes by:

To remain the nation's No. 1 meat processor, Tyson Foods needs a proactive approach to the future. It faces stiff competition from a fundamental shift in consumer behavior, with an increasing bias toward plant-based and sustainable options — expected to account for 10% of total sales by 2029.

Established in 2016, Tyson Ventures is an incubator for new technologies, backing plant-based meat producers like Beyond Meat in the very early stages. Now, it has turned its attention to cell-based meat innovators including Memphis Meats and Future Meat Technologies.

After selling its Beyond Meat stake in 2019, the company released its own line of plant-based products under the "Raised and Rooted" line. It shows the company isn't just seeking profit from these investments, but also opportunities to adapt the technologies into its own business. Raised and Rooted is currently in 10,000 US grocery stores, with an expansion into Europe's food service sector slated for 2021.

Tyson doesn't break down what portion of its sales come from plant-based meat. But while the plant-based sector is expected to grow rapidly, it's currently only $2 billion in size worldwide. Any share Tyson holds in this market would represent only a tiny fraction of its $43 billion in annual meat sales.

Given its improving operations and potential opportunities, the company remains cheap on an earnings-per-share multiple basis compared to a key competitor. At a current share price near $76, Tyson trades at 13 times 2020 earnings. Hormel Foods, with a similar market cap, trades at about 29 times. The S&P500 index, which hosts both companies, trades over 30 times earnings.

For Tyson, there is room for multiple expansion if it can continue delivering on earnings. Investors may have logically assumed a large hit to profits when the stock fell to $42 in March 2020, but as earnings improved, shares have rebounded 82%. This trend should continue, but to achieve a multiple more aligned with the broader market, the company may need to resolve its exposure to the wrongful death lawsuit brought by the family of deceased employees.

In 2014, Tyson lost a class action lawsuit (upheld in 2016) brought by employees who claimed they were underpaid and subjected to dangerous working conditions. The employees were awarded $5.8 million, and the story was played through the media constantly, hurting Tyson's reputation. The company's stock still doubled over the 2014 to 2016 period thanks to its underlying performance -- a sign that earnings truly do matter, and that the company can overcome its current legal woes.

In quarterly reports this year, look for a wind-down in the company's half a billion dollars of COVID-related charges, which should lift earnings. Similarly, as measures like social distancing are scaled back, watch for plants to return to full capacity, further improving operating margins.

Editor's Note: An earlier version of this article appeared to imply manager behavior directly caused COVID-19 deaths at Tyson facilities. The article has been updated to remove this implication.