Please ensure Javascript is enabled for purposes of website accessibility
Log In Help Join The Motley Fool
Free Article Join Over 1 Million Premium Members And Get More In-Depth Stock Guidance and Research
By Alex Carchidi - Apr 10, 2021 at 6:40AM

All three companies have enjoyed major growth catalysts since the start of 2021.

Between scientific innovation, new business models, and a resurging global economy, there's a tremendous amount of opportunity in the healthcare sector right now. In a way, that makes the process of picking winning investments more difficult. After all, if there are thousands of options that look pretty good at the moment, it can be hard to find companies that truly look great, especially in the long term, which is what matters.

To circumvent this issue, I've picked three stocks that have positive momentum in the short term, but even larger long-term prospects. Let's investigate in more detail so that you can evaluate whether one of these might be worth an investment this month. 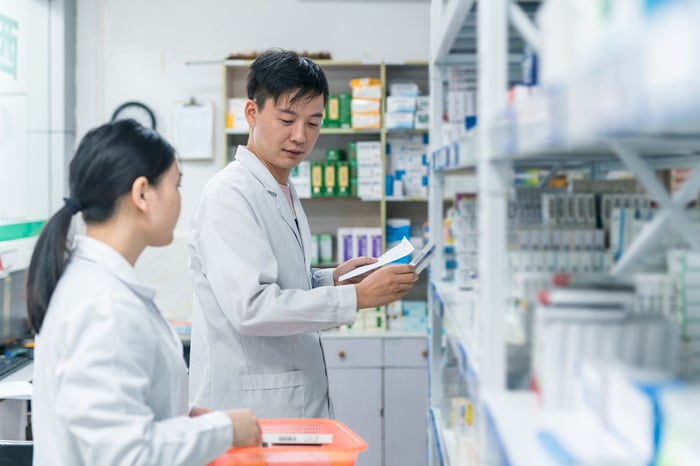 Genetic testing company Invitae (NVTA 4.10%) offers an array of saliva-based kits that doctors prescribe to consumers, who then collect and mail a sample from the comfort of their homes. For everything from cardiovascular disease risk to hereditary disorders, Invitae has a solution.

With revenue growth of 29% year over year and $279.6 million in annual revenue over the course of 2020, it's clear that Invitae is a company on the up-and-up. Test kit volume is rising sharply, and it will likely surpass 250,000 tests per quarter by the end of this year. But, for investors, perhaps the largest advantage is that the company is in the process of proving that its mail-in business model is cost-effective.

While it was still losing money in the fourth quarter, its reported gross profit rose to reach $81.3 million for 2020, its highest ever. Invitae's gross margin of 32% is also rising thanks to a falling cost of revenue in the tail end of last year. Moving forward, management expects the company's margins to rise throughout the rest of the year, and it could start to report positive earnings soon.

Plus, the company just scored a $1.5 billion investment from SoftBank Group to support its future growth, so shareholders can be confident that it will have the resources it needs to expand its test offerings while trimming costs at the same time.

When regulators at the U.S. Food and Drug Administration (FDA) gave its novel low-cost X-ray machine the green light last Friday, Nano-X Imaging (NNOX -3.81%) cleared a major do-or-die hurdle. Now, the company can move forward with commercializing its device by fulfilling sales orders, signing new subscriptions, and generating revenue. Initial shipments of its machines are scheduled for the fourth quarter, and given the stock's strong rally, it's safe to say that early investors are feeling good about their choice.

But this latest success isn't even the most important one in the company's recent past. Late last year, Nano-X finally demonstrated that its device actually works. Before it showed off the Nanox.ARC X-ray machine to a live audience at the Radiology Society of North America's virtual meeting, investors had no clue whether the company was made of hot air or represented a genuine opportunity.

Compared to standard X-ray tubes that cost as much as $150,000, Nano-X's could cost as low as $100 while providing the same quality results. Plus, traditional X-ray tubes are expensive to maintain, making them substantial capital investments that many healthcare systems can't afford.

To address this issue, the company's innovative pay-by-the-scan business model flips the script, offering its X-ray devices at a discount and instead charging based on use. That will ensure its plans for worldwide distribution are easier to realize, and if things go as anticipated, it'll make eye-popping revenue flows too, though it hasn't reported any as of yet.

As of early 2020, Amarin (AMRN -3.36%) had racked up a second approval for its cardiovascular drug, Vascepa. Now, doctors can prescribe it as an add-on treatment to the class of therapies called statins, which tens of millions of people worldwide take to reduce their risk of serious heart problems. In short, Amarin can now market Vascepa to patients who are taking statins, meaning that its potential revenue is much larger than before -- and the positive effect is already hitting the company's books.

Sales of Vascepa drove the company's annual total net revenue to increase by 43% compared to 2019, reaching $614.1 million for 2020. But that's entirely from the U.S., and Vascepa is in the process of going global. Amarin will launch it in the E.U. later this year, and it may get another approval in China before 2022. Worldwide, the market for Vascepa could be as large as 486 million people.

Finally, there's no direct competitor to the drug on the market. So, it's hard to see how Amarin could stumble, given that it has negligible debt and practically the entire world to expand into. All of these factors make Amarin a solid buy this month.