Please ensure Javascript is enabled for purposes of website accessibility
Log In Help Join The Motley Fool
Free Article Join Over 1 Million Premium Members And Get More In-Depth Stock Guidance and Research
By Dominic Rinaldi - Apr 10, 2021 at 8:30AM

Andrew Paradise shared the frustration of many mobile gamers: Constant advertisements and required in-game add-on purchases interrupted his fun, and the games he played didn't focus on true competition. So Paradise founded Skillz (SKLZ -1.05%), a mobile gaming platform that eliminates these woes. As players and developers increasingly flock to his company, Paradise's bet on skill-based games may pay off nicely for long-term investors. 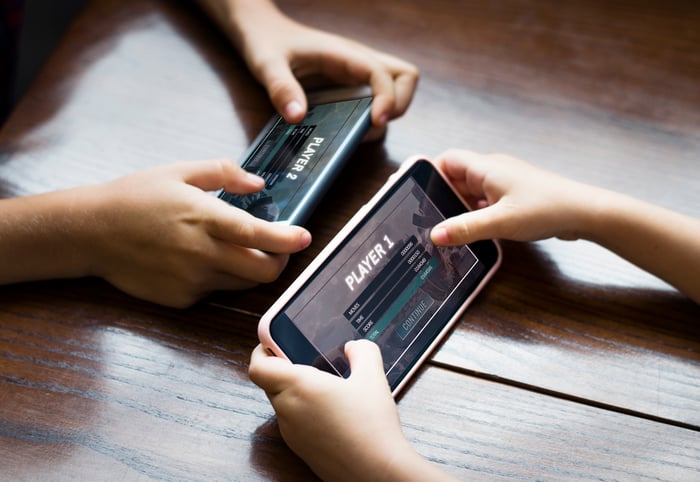 How do players win with Skillz?

On Skillz's eSports platform, players in nearly all regions of North America can bet against the competition for money and prizes in head-to-head battles and tournaments. Players spend an average 60 minutes a day on the platform, trying to improve their skills and grow their earnings -- more than 63% longer than average play times for the No. 1 mobile game, Candy Crush.

Skillz's technology has built-in anti-cheat and fraud capabilities, matching players by skill to fairly compete in tournaments and one-on-one match-ups. This system helps more players win more often, and gradually move up against harder competition to grow their earnings. Skillz doesn't hassle them with advertisements or in-game purchases, letting players focus solely on competing without interruption.

How do developers win with Skillz?

Most mobile games don't turn a profit. Their developers make little money, and the ads and in-game purchases designed to make that money end up driving away users. Skillz avoids those inconveniences, leading players to spend more time daily playing on the Skillz platform than the average daily time users spend on popular apps like Tik Tok, YouTube, Facebook, or Snapchat, and twice as much time played than the industry average for mobile gaming.

Over 30,000 game developers are making more money and growing their customer base faster by spuring traditional advertising and in-game purchases, and instead hosting their games on Skillz's eSports platform. Players pay a fee each time they enter a game or tournament. Roughly 85% of those payments go toward prizes, incentives, and developer profit share; the rest, nearly 15%, goes to Skillz.

At a recent UBS virtual conference, CEO Paradise stated that "most small and medium-sized developer studios own 100% of any game failures. If they have a hit game that hits double-digit millions in revenue, they have to typically sell it to a bigger company, due to not being able to support the game at scale."

Skillz eliminates these challenges for developers, handling business needs such as technical support, operations, and analytics on how players are using games. This allows developers to continue to do what they do best: Focus on making more great games.

How does Skillz win for its investors?

Skillz has been nearly doubling its revenue for several years in a row. Sales grew an impressive 92% year over year in 2020 to $230 million. That same year, its roster of games bringing in more than $1 million in annual revenue rose from 23 to 36.

Even more impressively, Skillz posted 95% gross profit margins in 2019 and 2020, because its sustainable platform requires little overhead or upkeep. At $7, Skillz's average revenue per user in 2020 more than tripled the mobile gaming average of leading game studios Gluu (GLUU) and Zynga (ZNGA).

Will Skillz win for you?

Skillz is growing rapidly, even with no top 10 games on the Apple or Android App Stores. However, it recently struck up partnerships with the NFL, Bowlero (which owns the Pro Bowlers' Association), and Ganassi Racing. Skillz also plans to launch the classic Tetris on the Skillz platform, and to expand into other regions outside of North America, such as India and Europe.

Bearish investors may argue that Skillz is not profitable, offers basic games that lack the sophistication of console games or other mobile offers, and projects very little earnings growth for the next two years. However, Skillz's projections include the costs of moving into new markets like India and Europe, but not the revenue or earnings growth that might follow. And its forecasts for 2021 and 2022 only include the games that were on the platform in 2020.

In 2021 investors should watch what new games get added from Skillz's new partnerships, especially the NFL partnership, while keeping an eye on how much additional revenue and earnings the company generates from going to market overseas. Skillz is a long-term investment that will fluctuate in share price in the short term as it reinvests in its growth, but could provide great returns for years to come.