Please ensure Javascript is enabled for purposes of website accessibility
Log In Help Join The Motley Fool
Free Article Join Over 1 Million Premium Members And Get More In-Depth Stock Guidance and Research
By Alex Carchidi - Apr 11, 2021 at 6:30AM

Given that AbbVie (ABBV 0.09%) is one of the largest pharma companies in the world, one might expect that it has a limited number of opportunities to deliver substantial growth to its investors. But the pharma giant is anything but complacent, and its work is always paying off in the form of new revenue streams that end up in shareholders' pockets via its juicy dividend.

While it's true that the company will face headwinds once its best-selling drug Humira starts facing serious competition from generics in the U.S., AbbVie is intent on making the transition as smooth as possible for investors. Further, it expects to hit a handful of important milestones for its other projects in 2021 -- and that's worth knowing about if you're a current shareholder or if you're considering a buy. 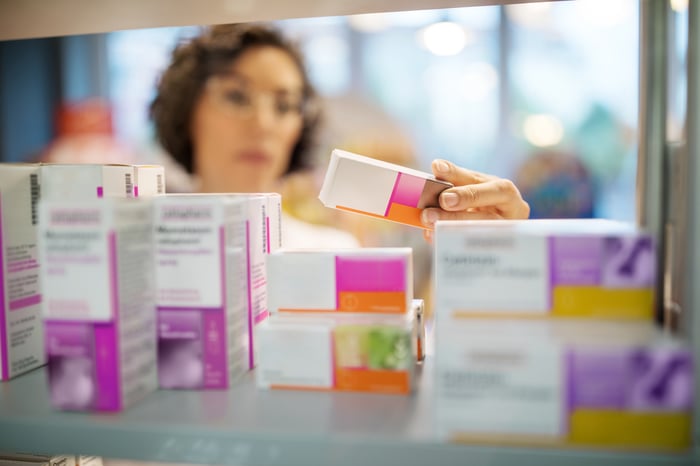 Before the end of 2021, AbbVie may have five approvals or expanded indications for several of its drugs. The company's drug Rinvoq could see the largest expansion of its potential revenue thanks to the new approvals, given that it will be prescribable for three new conditions: atopic dermatitis, psoriatic arthritis, and ankylosing spondylitis. Of course, that assumes regulators don't find any issue with AbbVie's paperwork or clinical trial data.

Aside from Rinvoq, Atogepant should also be approved to prevent migraines, and AGN-190584 could score its first approval for presbyopia. Depending on when regulators weigh in, it might take until 2022 before shareholders see revenue growth and investment returns from the new commercialization options, however.

While getting new information about its ongoing projects might not move AbbVie's stock price as much as it could for a smaller company, investors can still look forward to positive news supporting higher valuations. Through the end of the year, there will be a smorgasbord of readouts from phase 3 and registration-phase projects, including for the company's new moneymakers like Rinvoq and Skyrizi. Though there's no guarantee that 100% of the information in the updates will be positive, there's a good chance that the projected future revenue from at least a few of the projects will become a bit more tangible.

3. Humira secures yet another approval

In late February, AbbVie announced that its best-selling arthritis drug, Humira, had just chalked up yet another approved indication in the U.S. to treat moderate to severe pediatric ulcerative colitis. So, investors should expect new revenue flows to hit the books in the next earnings report, with sales in the new indication scaling up over the remainder of the year. The crazy part of the new approval is that Humira was already approved for around a dozen other indications, so it's no surprise that the drug made the company $19.8 billion in 2020, accounting for 43% of its total revenue.

Even as Humira will face mounting competition from biosimilars for its older indications once it loses patent exclusivity in 2023, it's clear that AbbVie is still determined to squeeze every last penny out of its best investment to date.

4. Rinvoq is looking even better than before after the latest update

In continuity with AbbVie's strong position in the arthritis market, The New England Journal of Medicine published favorable results from a phase 3 clinical trial for Rinvoq on April 1 -- and you can bet that prestigious medical journals don't do April Fool's jokes. In short, the SELECT-PsA trial found that Rinvoq helped people with treatment-resistant psoriatic arthritis resolve their symptoms like fatigue and enthesitis far beyond the relief offered by a placebo. Moreover, the study reported that these benefits were durable out to 24 weeks. That's great news for patients, and it also means that investors can look forward to higher earnings down the line when the drug could eventually be approved for the indication.