Shares of Roblox (RBLX 6.73%) headed higher on Tuesday, closing the day up 9.4% after toymaker Hasbro (HAS -0.65%) announced that it will partner with the internet gaming hub company "to bring Roblox immersive digital worlds to life" in physical form.

(The news didn't do nearly as much good for Hasbro; its stock gained only 1.8%.) 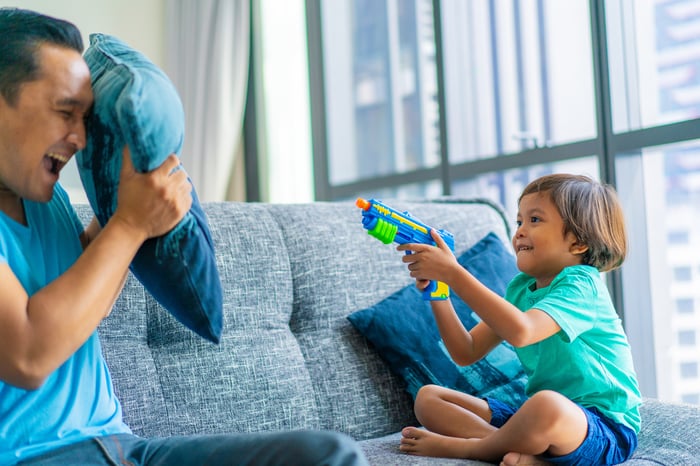 Specifically, Hasbro announced that it will introduce "a range of Roblox inspired Nerf blasters representing some of the most popular experiences on the Roblox platform," and also begin selling a Roblox version of the board game Monopoly.

Both sets of Roblox toys will begin appearing on U.S. store shelves this fall, said Hasbro, with sales to expand to additional markets later.

Hasbro noted that when consumers buy the physical toys, they will also receive codes that can be redeemed for virtual items to use in Roblox games -- a virtual blaster in the case of the Nerf guns, and "an exclusive virtual item" yet to be named when buying the Monopoly set. Most likely, the prospect of these digital add-ons boosting Roblox's value isn't what investors were responding to Tuesday. Rather, they're anticipating licensing fees that Hasbro will presumably pay Roblox for the use of its creations in manufacturing new toys.

Neither company, by the way, put a value on such presumed licensing fees. That didn't prevent investors from deciding, though, that they just made Roblox $3.5 billion more valuable than it was Monday.

2 Robinhood Stocks That Millionaires Are Buying

Why Roblox Stock Jumped 28% This Week

Buy These 2 Growth Stocks on the Dip