Please ensure Javascript is enabled for purposes of website accessibility
Log In Help Join The Motley Fool
Free Article Join Over 1 Million Premium Members And Get More In-Depth Stock Guidance and Research
By Rich Duprey - Apr 14, 2021 at 8:56AM

Deep discount retailer Dollar General (DG 0.17%) is going on a hiring spree next week, holding a five-day jobs event that looks to bring 20,000 new workers on board.

That equates to a 13% increase in the 158,000 workers it already employs and suggests Dollar General anticipates continued strong growth going forward. 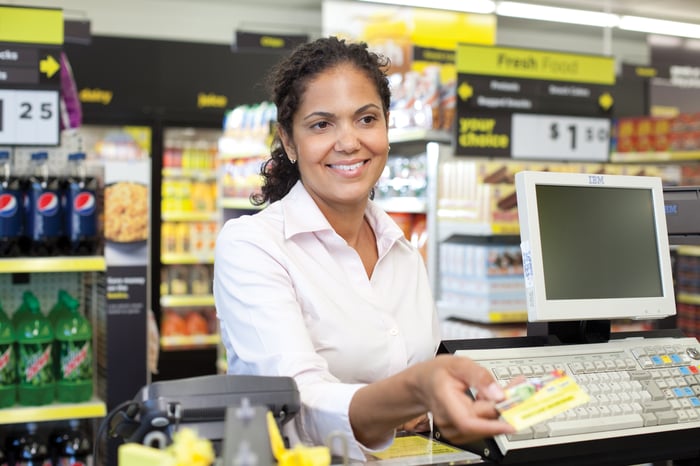 The discounter has delivered 31 consecutive years of comparable store sales growth, an enviable record considering the considerable sprawl of its more than 17,200 stores in 46 states. Rapid expansion is still on the table and Dollar General is looking to hire for all of its operations.

Not only is the retailer looking for workers for its discount stores, but also its distribution centers, corporate headquarters, and its private fleet of trucks, which currently stands at over 700 tractors.

The dollar store sector soared during the pandemic, and remains well positioned compared to other retail channels because of its low prices and relative recession-proof business.

It's a highly competitive market, however, and discounters like Dollar General have sought to further expand their opportunities by incorporating more consumables and fresh foods.

Over three-quarters of Dollar General's sales come from consumables, and now it is experimenting with new store concepts, too.

Last year it opened its first five popshelf stores, a discount chain targeting more affluent customers. It plans to open 50 more stores this year, and ultimately sees it as a 3,000 store opportunity.

The deep discounter will need to continue hiring workers to fill all of those positions. The current hiring event will take place online and in-person April 19 to April 23.