Please ensure Javascript is enabled for purposes of website accessibility
Log In Help Join The Motley Fool
Free Article Join Over 1 Million Premium Members And Get More In-Depth Stock Guidance and Research
By Keith Speights - Apr 14, 2021 at 5:52AM

Millions of kids could soon be allowed to receive Pfizer's COVID-19 vaccine. Will the big drugmaker make some big bucks this year?

Pfizer (PFE -1.28%) has racked up multiple firsts with its vaccine. BNT162b2 was the first COVID-19 vaccine to win Emergency Use Authorization (EUA) in the U.S. for adults. It was the first to win EUA for teens ages 16 and up. And now another first could be on the way.

A couple of weeks ago, Pfizer and its partner BioNTech (BNTX 2.24%) reported results from a late-stage study of BNT162b2 in children ages 12 to 15. BNT162b2 achieved an efficacy of 100% in the study. The companies announced on April 9 that they've filed for an expanded EUA for this lower age group with the U.S. Food and Drug Administration (FDA).

Pfizer previously estimated that BNT162b2 would generate sales of around $15 billion this year. However, that figure was based on the supply deals it had in place in early February. How much money could Pfizer make in 2021 if it wins authorization for the vaccine in adolescents? You might be surprised. 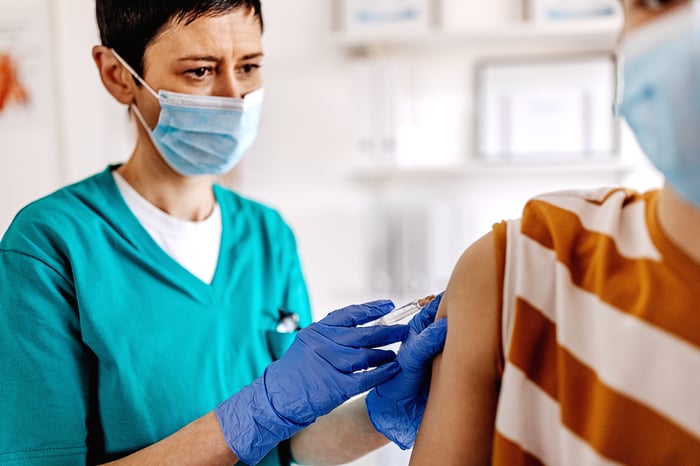 This total, by the way, doesn't include the combined 400 million doses from agreements the U.S. has in place with AstraZeneca and Novavax. Both companies could file for EUAs for their respective vaccines within the next couple of months.

With an oversupply of vaccines, the U.S. government could choose to push the use of doses of other vaccines instead of Pfizer's for adults. If it takes that approach, there will be no need to order more doses from Pfizer to be used in adolescents -- at least for this year.

A different story after this year

There's still a chance that the U.S. could decide to buy additional doses of Pfizer's vaccine specifically targeting immunization of kids ages 12 to 15. The federal government isn't exactly known for watching its pennies. That's especially been the case during the pandemic. Either way, Pfizer stands to make a significant chunk of change from vaccinating adolescents after 2021.

Pfizer's COVID-19 vaccine costs $19.50 per dose. The potential addressable market in vaccinating adolescents ages 12 to 15 at that price tag would be around $650 million with two doses administered.

There are two assumptions that are critical to Pfizer making money from vaccinating kids 12 to 15 years old. First, we must assume that BNT162b2 wins EUA for this age group. Second, we have to assume that adolescent vaccination rates will be relatively high.

The first assumption seems to be pretty much a slam dunk. The safety for BNT162b2 in the younger age group was similar to what was observed in individuals aged 16 to 25. And 100% efficacy is as good as it gets.

However, it remains to be seen what vaccination rates for adolescents will be. Many parents could be hesitant about their kids receiving any COVID-19 vaccine. Potential issues related to other vaccines (such as blood clotting with AstraZeneca's vaccine in Europe) could raise concerns about all vaccines -- even if such concerns are unwarranted.

Primarily because of the questions about adolescent vaccination rates, don't look for Pfizer's shares to get much of a bump if it wins EUA for the younger age group. The big pharma stock will probably need something else to provide a spark. Achieving success with a booster dose for new coronavirus variants could perhaps be the best catalyst opportunity in the near future.