Please ensure Javascript is enabled for purposes of website accessibility
Log In Help Join The Motley Fool
Free Article Join Over 1 Million Premium Members And Get More In-Depth Stock Guidance and Research
By Rich Duprey - Updated Apr 16, 2021 at 11:33AM

Esports Technologies (NASDAQ:EBET) debuted on the Nasdaq exchange today, and it immediately became apparent that the esports online betting platform left millions of dollars on the table with its initial public offering (IPO).

Even though the IPO offer price was increased to the upper end of the expected range, or $6 per share, the stock immediately took off, opening at $21 and rocketing to over $36 at the close today, a cool 500% gain on its first day of trading. 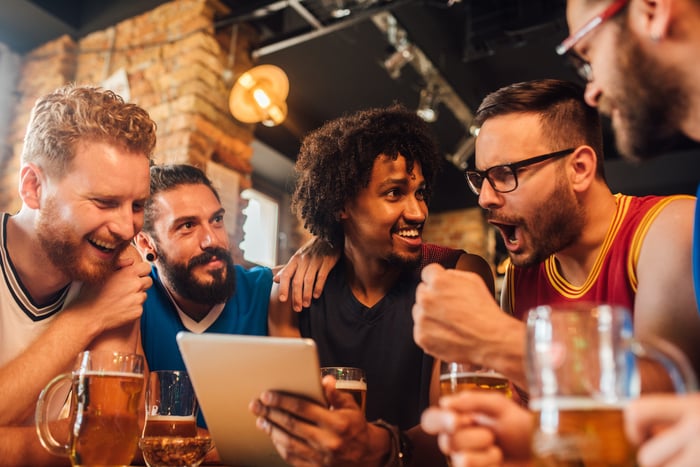 Men gathered around a table drinking beer and watching sports on a tablet.

Esports Technologies, which is focused on the growing esports and competitive-gaming phenomenon, increased the amount of stock it would sell from 2 million shares to 2.4 million shares. The expected price range had been between $5 to $6 a share, which itself was elevated from a previous estimate of $4.50 to $5.

While the stock made enormous gains, Esports Technologies is not the only player targeting the competitive-gaming market. Esports Entertainment Group (GMBL 1.73%) is aiming at the same demographic, and Skillz (SKLZ -4.61%) is a game developer that lets players compete for prizes. Esports Entertainment got its own boost recently after Citron Research said video game retailer GameStop (GME -4.08%) should buy it.

Yet because esports betting is seen as a massive opportunity, accounting for an estimated $1.8 billion of the $443 billion global gambling industry, there is a large runway for growth for all players.

But that doesn't necessarily mean Esports Technologies deserved the meteoric rise its stock enjoyed upon its debut. It doesn't seem tethered to business fundamentals, and this esports stock could very quickly see the value of its shares deflate.

Is This the Best Growth Stock in the $7 Billion Esports Industry?