Please ensure Javascript is enabled for purposes of website accessibility
Log In Help Join The Motley Fool
Free Article Join Over 1 Million Premium Members And Get More In-Depth Stock Guidance and Research
By Anthony Di Pizio - Apr 16, 2021 at 6:23AM

The stock is near all-time highs despite heavily depressed key metrics, posing risks for new buyers.

It probably comes as no surprise that online travel company Expedia Group (EXPE 3.07%) had a really difficult 2020. With almost every country on Earth implementing some form of border closure to stave off the pandemic, consumers were forced to staycation. The US has implemented a really aggressive vaccination program, but much of the developed world is lagging behind, so consumers could be waiting for some time before their next overseas adventure. Expedia's stock currently trades at all-time highs, and that's difficult to make sense of. 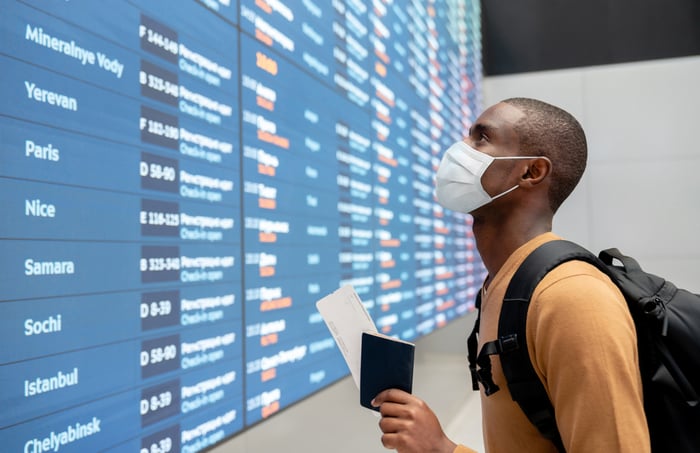 Expedia is more than just one brand. The group is an umbrella of about 20 different companies, all focused around travel. The flagship service remains the online travel agency, Expedia, but some other well-known subsidiaries include Wotif, Trivago, Hotels.com and Travelocity.

In the years prior to the pandemic, the group was growing earnings steadily as global travel became more common than ever before.

The World Tourism Organization says that global tourism grew 4% in 2019, so Expedia successfully grew earnings at a faster pace than its broader market.

In December 2019, right before COVID ravaged the world, Expedia's stock was trading at $115 — 18.6 times 2019 earnings — which was cheaper than the S&P 500. Ultimately, the stock was attractive based on earnings growth, plus the company was returning money to shareholders with stock buybacks and a small dividend yield of just over 1%.

The current scenario is rather puzzling. The stock trades at $171, near all-time highs, with none of the above benefits — no earnings, no buybacks, and no current dividend.

Vaccinations are rolling out across the world, with the US among the leaders of all major economies.

However, major travel destinations like Europe are lagging. Also, with a couple of vaccines (AstraZeneca and J&J) being paused because of  adverse effects, the timeline for herd immunity may be pushed out further.

The Transportation Security Administration publishes the daily number of travelers screened at airport checkpoints across America. It measures both domestic and international passengers. This figure hit a pandemic high of 1.58 million on April 2, but it's still down 36% from the 2.48 million passengers who traveled on the same day in 2019 (pre-COVID). This number needs to climb materially higher for travel companies to turn their losses around.

Expedia Group is contending with severely depressed key metrics. Gross bookings is the most important of them all, which represents the total retail value of transactions booked by travelers. In 2020, the company only did a third of the business of the prior year.

Although revenue is down significantly, the company still generated almost $5.2 billion in 2020 (down from $12 billion in 2019). With a current market cap of $24.5 billion, trading at five times revenue doesn't sound too unreasonable, given current market conditions. However, investors should be mindful that Expedia isn't a hyper-growth technology name — it's a mature company that falls more in the value category — it typically trades based on earnings-per-share.

The company needs to climb out of a fairly significant hole: $4.6 billion in negative free cash flow for 2020. This compares to $1.6 billion in positive free cash flow the year prior, so it needs to generate a $6 billion swing to return to normal. Unfortunately, Expedia notes that the business environment is still too uncertain to issue earnings guidance, so its path forward may not be entirely clear until later this year.

For investors, it's worth watching whether a boost to domestic travel moves the needle on total gross bookings, because it could be another summer before international holidays are back on the cards. Externally, it's important to keep an eye on the broader vaccination program. If the stock offers a discount in the near future, coinciding with herd immunity, the stock could be revisited — for now, it seems really expensive.