Please ensure Javascript is enabled for purposes of website accessibility
Log In Help Join The Motley Fool
Free Article Join Over 1 Million Premium Members And Get More In-Depth Stock Guidance and Research
By Cory Renauer - Apr 19, 2021 at 7:09AM

Here's what you need to separate the most important signals from the rest of the noise.

Intuitive Surgical (ISRG -0.68%), the undisputed leader of robot-assisted surgery, will report earnings from the first three months of 2021 after the market closes on Tuesday, April 20, 2021. The COVID-19 pandemic has been an enormous challenge for hospitals that use the company's surgical systems and shareholders are probably right to be nervous about the company's performance. Here are the three most important topics investors want to listen for when Intuitive Surgical discusses reports first-quarter results.

Instead of double-digit percentages investors are used to seeing year after year from Intuitive Surgical's domestic market, total procedures performed with the company's da Vinci systems actually fell 1% in 2020 from the previous year. That's a very big problem because more than two-thirds of all surgical procedures performed with consumable instruments and accessories clients purchase from Intuitive Surgical occur in the United States. 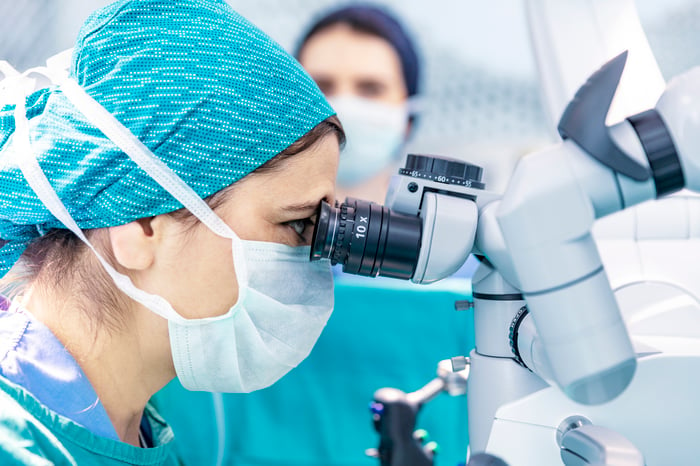 Procedure volumes and new system sales were humming along in the U.S. at the beginning of the first quarter last year. By the end of March, though, COVID-19 related restrictions hammered weekly procedure volumes around 65% lower. As the pandemic progressed, hospital operators began deferring new da Vinci system placements, and millions of doctor visits that eventually lead to a da Vinci-assisted surgical procedure have also been rescheduled. Demand for the company's da Vinci surgical systems has been depressed all over the globe since the pandemic started, but clear signs of a rebound in the company's most important region could push the stock higher.

America's relatively rapid COVID-19 vaccine rollout should lead to a rebound for Intuitive's U.S. market months before we see a similar return to normal in Europe and other established markets, but the timing is still uncertain. During Medtronic's (MDT -0.96%) fiscal third quarter that ended Jan. 31, the medical-device giant's surgical innovations segment reported a year-over-year revenue loss of 5.3% because of resurging COVID-19 outbreaks.

With the first SARS outbreak from 2003 lingering in their memories, rapidly modernizing hospitals across the Pacific ocean from Intuitive Surgical's headquarters haven't been as severely affected as their counterparts in the U.S. Before the end of 2020, China had already become the company's second-largest market by procedure count and analysts will be watching for signs of continuing growth in this crucial geographic segment.

In 2020, all procedures performed with da Vinci outside the U.S. reached just 346,000 compared to 876,000 domestic procedures. In the relatively limited U.S. market, procedure growth in recent years has been driven by increased demand for gynecology, general surgery, and other operating segments that are still coming online in China and neighboring countries.

More procedures are performed with Intuitive Surgical machines in China than in any other country outside of the U.S., even though a big joint venture with Fosun Pharma to directly market equipment in China isn't expected to report any revenue this year. The Joint Venture is built around lung tumor biopsy technology that the company's still rolling out in the U.S. following a green light from the FDA in 2019. An estimated 787,000 people in China were diagnosed with a new case of lung cancer in 2015, and nearly all of them would benefit from a clear look at samples of their tumors.

Getting a surgical tool into a position where it can retrieve a lung tumor sample isn't easy, but Intuitive Surgical's Ion endoluminal system is a tiny, flexible catheter-shaped device that could be used to perform biopsies that would be too dangerous with traditional methods. At the end of 2020, Intuitive Surgical had placed just 36 of its Ion endoluminal devices and they're all in the U.S. If this number doesn't start rising soon, investors might have to assume the joint venture with Fosun Pharma isn't going anywhere fast either.

Prostate and kidney surgeries accounted for just 15% of total procedures performed in the mature U.S. market last year, but urology was still the largest growth driver outside of the U.S. Investors will want to keep an eye open for signs of expansion abroad beyond the limited urology field.

While there's a lot to look out for when Intuitive Surgical posts first-quarter results, shareholders should remember not to overreact if things aren't going as smoothly as hoped. Intuitive Surgical isn't the only device maker dealing with hospitals that have to make some tough choices. This means any would-be competitors attempting to get the attention of purchasing departments don't have a chance right now. With plenty of real-world data that proves da Vinci machines can pay for themselves, though, Intuitive Surgical's dominance of the surgical robotics industry looks unbreakable.