Please ensure Javascript is enabled for purposes of website accessibility
Log In Help Join The Motley Fool
Free Article Join Over 1 Million Premium Members And Get More In-Depth Stock Guidance and Research
By Royston Yang - Apr 19, 2021 at 7:29AM

The exercise bike company is revolutionizing how we work out as the world transitions to a new normal.

It's not often that you witness a brand new trend emerge in the way people live their lives, but the pandemic has certainly brought about many such changes in a short period. Widespread lockdowns and the shift to telecommuting have resulted in a sea change in the way people work, interact, and even exercise. Peloton (PTON 14.02%) has latched onto these new trends to offer investors a compelling proposition: Stay safe from the pandemic and work out in the comfort of your own home.

The exercise bike and treadmill company has seen a surge in demand for home fitness equipment since the crisis broke out early last year. Not only are more people buying exercise equipment for home use, but these same people are also rushing to sign up for connected fitness subscriptions to work out in tandem with trainers.

Peloton has been a hot topic among investors for the past year, and with expansion plans in place and an acquisition to boot, it's not hard to see why. 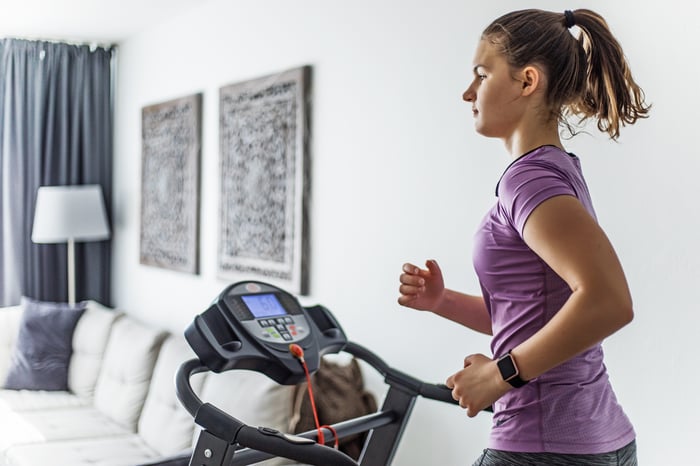 Peloton's latest numbers attest to its strong growth over the past year. Connected fitness subscriptions for the second quarter of fiscal 2021 surged 134% year over year to 1.67 million, and the company's member base more than doubled during this period to over 4.4 million. Total workouts quadrupled to 98.1 million in the latest quarter as well. These sharp gains are a testament to the company's ability to attract more members to its platform and to keep them highly engaged.

The company's financials have also shown a vast improvement in tandem with the rise in workouts and fitness subscriptions. Total revenue for the six months ended Dec 31, 2020 were up 163% year over year to $1.82 billion, and the company reported operating income of $127.7 million, a major turnaround from the $112.4 million operating loss reported in the prior-year period.

In a move to expand its sources of revenue, Peloton announced an agreement to acquire Precor, a global commercial fitness equipment provider, for $420 million last December. This transaction is noteworthy as it not only adds around 625,000 square feet of additional manufacturing in the U.S. but also opens up the business-to-business (B2B) market for the company.

Peloton was facing a deluge of orders as consumer demand surged for its equipment, and in its previous quarter, the company admitted that some of its members faced significant delays in receiving the products they ordered. The acquisition should help to increase Peloton's manufacturing capacity to deal with the order backlog. The company's entry into the commercial market introduces an additional revenue stream that should be less volatile than its core consumer business.

Steady expansion into other regions

Peloton announced last month that it will be launching its products in Australia, the company's first foray into the Asia Pacific region. The original Peloton Bike and app will be released along with thousands of workouts accompanied by music from popular artists. Physical retail showrooms will be built in key Australian cities such as Sydney and Melbourne, in time for the official launch of the brand in the second half of 2021.

The company is going down under to further expand its membership base outside of its current North American home. It remains to be seen if the company will target other countries within Asia, as future plans may hinge on the success of its Australian launch.

Catalysts for growth still in place

Peloton should see continued success in its push for market leadership in the home fitness space as it scales up its offerings and enters new markets. The pandemic acted as a catalyst that accelerated the demand for home fitness products, boosting the company's business and making it a household name.

Even after the crisis has passed, businesses will still practice telecommuting to some extent to provide flexibility to their employees and reduce their overall expenses by cutting down their physical footprints. Exercising at home seems here to stay and will form a structural trend that can only grow stronger as large swaths of the human population move online in various parts of the world.

Peloton is probably just getting started. The total addressable market for the industry remains significant, and the company is well-positioned to tap into it for continued long-term growth.