Please ensure Javascript is enabled for purposes of website accessibility
Log In Help Join The Motley Fool
Free Article Join Over 1 Million Premium Members And Get More In-Depth Stock Guidance and Research
By Taylor Carmichael - Apr 20, 2021 at 8:30AM

Mohawk Group and Upstart are using artificial intelligence to disrupt two massive industries -- retailing and finance. How valuable will these first movers be?

Artificial intelligence (AI) has huge potential to be the "next big thing," maybe even as important as the internet. Computers can't think, and they are inferior to humans in many ways. But what computers are really good at doing is finding value in reams and reams of data.

For example, over a 30-year period, Jim Simons and Renaissance Technologies averaged 66% annualized returns on their holdings in the stock market. Simons did no qualitative research, but he's a mathematician and was able to use computers to find pricing inefficiencies. That's not technically AI, but it shows you how data analysis can lead to startling success.

We're seeing more and more AI companies go public now. Mohawk Group Holdings (ATER 0.93%) acquires and launches small companies in the consumer goods space after doing data analysis through its AIMEE platform (more below). And Upstart (UPST 3.79%) is hoping to use its AI to expand the lending pool to subprime borrowers without a rise in defaults.

Let's find out a bit more about these two 21st century companies and whether now is the right time for you to start making some AI investments. 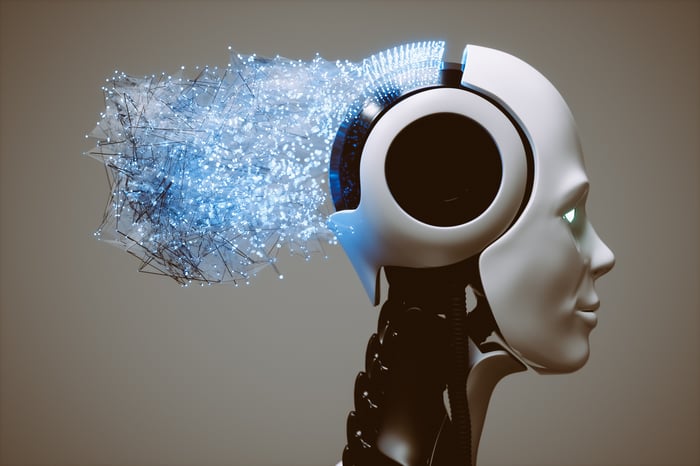 Mohawk Group, a small company with a market cap under $1 billion, is an early adapter in using AI technology for internet retail. The company's platform is called AIMEE, short for Artificial Intelligence Mohawk E-commerce Engine. And it's using its software to find any number of investment opportunities. Some of these investments seem quite bizarre to my human mind. But that's the beauty of AI. The robot doesn't care about our feelings, biases, or prejudices. It's completely open in that way, making judgments only in regard to all the data that it is fed.

Following the suggestions of AIMEE, Mohawk Group acquired Aussie Health, a company that offers Enema Coffee. And it's bought Spiralizer and its many devices that slice food into spirals. It also owns Truweo and its Posture Corrector. Why is Mohawk buying this odd collection of consumer goods companies? The AI is relying on search data at Amazon, online review data, the number of third-party sellers, and various other data points that convince the computer that there is sufficient demand for an investment.

What makes Mohawk a particularly exciting investment is that the company is not just involved in the consumer goods space -- it is also licensing its AIMEE platform to any third-party seller who wants to subscribe to it. This optionality reminds me of how Amazon morphed from an e-commerce superstar to a technology company that offered its cloud architecture to other internet companies.

While AI is not perfect, this data-driven approach might give Mohawk advantages over its competitors. Already the company has achieved profitability in its most recent quarter. And Mohawk grew its top line by 62% year over year in the fourth quarter. Despite this impressive growth and profitability, Wall Street is giving this rising AI superstar a tiny multiple of 2.5 times sales right now.

Upstart is an internet company providing small loans to consumers in the range of $1,000 to $50,000 dollars. The company runs no credit checks; applying for a loan will not affect your credit score. Instead of relying upon the old way of a "credit score," Upstart management says it uses AI technology to analyze roughly 1,600 data points in order to determine your credit risk. And if you are approved for a loan, 99% of loans are made within 24 hours after signing.

Upstart itself does not loan you the money. Instead, it relies upon banking partners who are responsible for the financial risk. Right now most of Upstart's loans are made by Cross River Bank. That bank originated two-thirds of Upstart's loans in 2020.

So far, business has been brisk. Over $9 billion in small loans have already originated on the Upstart platform. And 71% of those loans are fully automated. That means no human being was involved in the process. The AI looks at all the data points and approves the loan.

If it works, this is going to be an amazing business, one that completely transforms the banking industry. Does it work? That's the trillion-dollar question.

On its website, Upstart claims 75% fewer defaults than traditional underwriting policies using the same approval rate. To back up this claim, Upstart did an internal study in 2017, using hypothetical default rates.

So far, the banking clients are happy and sales are escalating nicely. The stock price zoomed when the company reported its fourth-quarter numbers. It wasn't just the 39% revenue growth that excited market traders; Upstart management raised estimates for the first quarter. And it was a significant raise, calling for revenue growth in the triple-digit percentage range.

Upstart, like Mohawk, is a fast-growing company in the AI space. Both of these companies are using AI technology to transform massive markets. If either company makes major inroads into their market opportunity, early investors should see amazing returns.

Why Upstart Stock Is Falling Hard

Upstart Is Down 93% After Its Post-Earnings Crash -- Is the Stock a Buy?