Please ensure Javascript is enabled for purposes of website accessibility
Log In Help Join The Motley Fool
Free Article Join Over 1 Million Premium Members And Get More In-Depth Stock Guidance and Research
By Eric Volkman - Updated Apr 21, 2021 at 10:52AM

Might the storied luxury carmaker's sleek model be a Tesla killer?

Watch out, Tesla (TSLA 4.67%) -- luxury carmakers are determined to carve out share in the electric vehicle (EV) market, and they're pushing ahead with some attractive and eye-catching new models in the category. The latest example is Volkswagen's (VWAGY 0.35%) Audi, which unveiled an EV version of its durable A6 sedan as a concept car at the Shanghai Auto Show.

The A6 e-tron, like its internal-combustion namesake, is a four-door luxury sedan. Unlike the A6 models currently on the road, the e-tron is built on the company's Premium Platform Electric (PPE) technology architecture. In the immediate (and perhaps longer-term) future, this is the platform on which Audi EVs will be constructed. 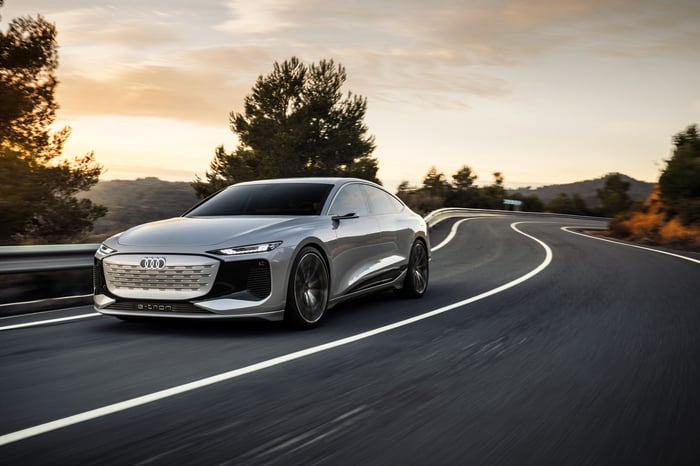 In fact, says Audi, outside of the car's dimensions, the A6 e-tron represents "an entirely new design concept."

"For its part, the PPE technology will ensure that what the car's lines imply is actually translated into dynamic driving performance and everyday suitability befitting use as a primary vehicle," the carmaker wrote in its press release on the model.

Audi added that, depending on the drive system and model version, the A6 e-tron should have a range of over 700 kilometers (435 miles), with the faster models able to go from 0 to 100 kilometers per hour (62 m.p.h.) in under 4 seconds.

The A6 e-tron likely won't in itself pose an existential threat to Tesla's position at the higher end of the EV market -- Audi is too much of a niche brand for that. But it is another indication that the world's traditional carmakers intend to compete intensely in the segment. The EV wars are still in their very early phases, and many of the combatants are still marshaling their forces.