Please ensure Javascript is enabled for purposes of website accessibility
Log In Help Join The Motley Fool
Free Article Join Over 1 Million Premium Members And Get More In-Depth Stock Guidance and Research
By Rich Duprey - Apr 21, 2021 at 11:11AM

Fan backlash was too great for member teams to continue participating.

And just like that, it's over. The breakaway soccer league financed by JPMorgan Chase (JPM 1.28%) is already in shambles a day after its creation following a massive backlash from fans, players, rival teams and leagues, and the British government.

All six U.K. soccer teams, including Arsenal, Liverpool, and Manchester United (MANU -1.08%), have backed out of participating in the new Super League, and the Italian and Spanish teams are considering withdrawing as well. 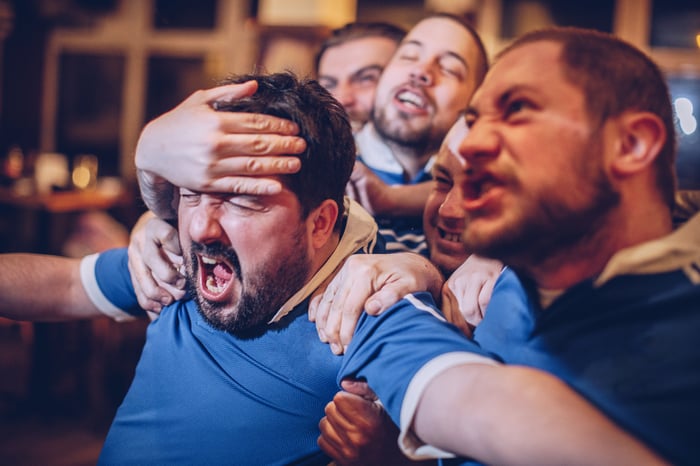 While the Super League was discussed as a possibility for months, it wasn't until the investment bank agreed to provide the teams with up to $6 billion in debt financing that it was able to lure enough clubs to make the break.

Spain's Real Madrid team was a key mover of the breakaway league, and had used JPMorgan previously to renovate the team's stadium.

Although the maneuver was packaged as a means of centralizing world-class soccer play, it was quickly targeted by critics as a way for the teams playing in the closed league to enrich themselves at the expense of small, less well-financed teams.

The founding clubs were promised a large cut of the billions in financing JPMorgan was providing: about $400 million each, or more than four times what they currently make. It was apparently too great a lure to resist, at least until the fans revolted.

The concept of a separate league open only to a select group of teams was never popular with the public, many players, and the global organizing groups such as FIFA, which threatened sanctions if the league did break away. The outcry following the announcement was immediate, and JPMorgan became a target for their ire for financing the rebel outfit, leading to the bank trending on Twitter.