Please ensure Javascript is enabled for purposes of website accessibility
Log In Help Join The Motley Fool
Free Article Join Over 1 Million Premium Members And Get More In-Depth Stock Guidance and Research
By David Jagielski - Apr 23, 2021 at 6:20AM

The potential growth of the cannabis industry is too big to ignore.

It's reasonable to assume that the federal prohibition of marijuana is deterring many companies from getting involved with the cannabis industry. But if the legal status of the drug changes one day, investors could see a lot of mergers, acquisitions, and moves into the sector take place as businesses look to capitalize on the new opportunities. While there have been marijuana-related transactions, investors know that many pharmaceutical and even tech companies could be chomping at the bit to get involved -- once the path is clear.

However, because marijuana is still a polarizing topic, companies often avoid suggesting that they may expand into the sector. And that is why it was surprising to hear an executive from a top tech company come out and say that the business will seriously consider involvement in marijuana once the U.S. legalizes it. 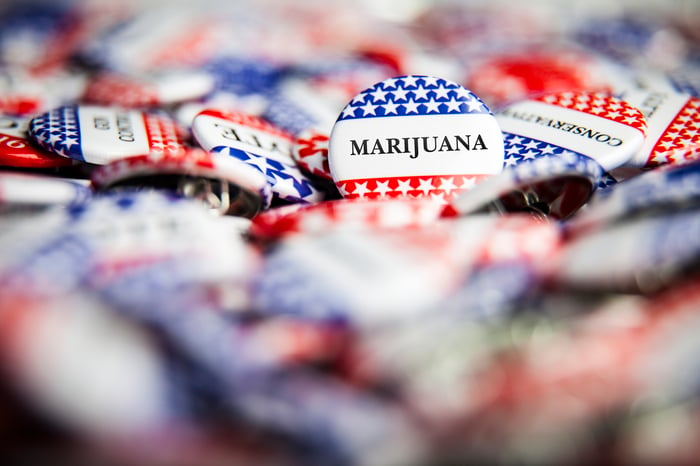 Uber has cannabis on its radar

In an interview earlier this month with CNBC, Uber (UBER -4.53%) CEO Dara Khosrowshahi said, "When the road is clear for cannabis, when federal laws come into play, we're absolutely going to take a look at it." Although that isn't a guarantee that the company will expand into cannabis, it is still an unusually strong statement. A key reason Khosrowshahi is considering the industry is because of its growth opportunities.

It's hard to argue against cannabis' growth potential. Analysts are projecting significant growth over the coming years. Research company MarketsandMarkets forecasts that by 2026, the global cannabis market will be worth more than $90 billion -- more than four times the size it was in 2020 at $20.5 billion.

Uncovering the next big opportunity is important for a company like Uber, which is always looking to expand its sales net. With a hefty loss of $6.8 billion in 2020 (which was an improvement from an $8.5 billion loss in 2019), more sources of revenue could certainly help the company get closer to profitability. Delivery has been important for the cannabis industry amid the pandemic, especially amid lockdowns that prevented consumers from making in-person visits. And that is a trend that Uber has also been benefiting from. In 2020, its delivery revenue, which includes UberEats, was $3.9 billion and grew at a rate of 179% year over year. Its mobility revenue, which is its core business that includes picking up passengers, declined by 43% to $6.1 billion.

Adding cannabis to the list of items Uber delivers may not be a big change in its business. But it isn't a surprise that the company is holding off on potentially offering that service until the federal legalization of marijuana. There is hope that legalization could happen sooner rather than later, however, especially under President Joe Biden, who is at the very least open to some possible reform -- including decriminalization. Outright legalization may still be a long shot, but if it happens, it will open the floodgates, and more businesses will find ways to get in on the marijuana boom.

Uber is coming off a tough year, and expanding into cannabis is one way that could improve its bottom line. On the company's earnings call on Feb. 10, Khosrowshahi stated that "growing product offerings" would be a priority for 2021. Although there was no mention of cannabis specifically, that could certainly be an option down the road if federal laws were to permit Uber to expand into that category. But the company may be able to improve its bottom line even without delivering marijuana.

Last year, Uber posted an adjusted EBITDA loss of $454 million. That was a 26% improvement from 2019, and the company believes it is on track to breakeven this year. However, for a growth stock like Uber, investors will also be looking for a stronger top line. With trips down 27% in 2020, the company's top line suffered, but it was able to offset some of that decline due to a strong delivery business. And that's where cannabis could play a big role for the company -- in expanding its offerings and making it less reliant on trips. Not only could that add to its long-term growth prospects, but it could help make Uber a more stable investment overall.

As a bonus, the stock could also benefit from any pot-related news including moves toward legalization. Since November 2020, when multiple states passed marijuana reform (including Arizona and New Jersey), the Horizons Marijuana Life Sciences ETF has risen almost 80%, outpacing not just the S&P 500 and its 27% gains during that period, but also Uber, which is up 67%. That hype could make Uber's stock an even hotter buy over the long term.

While Uber may not need cannabis to improve its prospects for profitability, it could certainly help accelerate them and make the business more attractive to excited cannabis investors.

Patience is key for cannabis investors

There are many industries and companies likely eyeing the cannabis market. It's hard to ignore the market's potential, especially for a company like Uber that wouldn't have to drastically change its operations or business model. But that doesn't mean investors should go out and buy shares of Uber or another company that might expand into cannabis. Marijuana legalization could still be years away.

Until then, Uber is a risky buy, because if its trip volumes don't recover in 2021, it may be another tough year for the company. And with the stock trading at 9 times its revenue, which is well above the 3 times sales that investors are paying for the average holding in the SPDR S&P 500 ETF Trust, it doesn't come cheap. For now, investors may be better off waiting to see what happens with marijuana legalization before making any decision as a lot can change by then for both Uber and the cannabis industry.