Please ensure Javascript is enabled for purposes of website accessibility
Log In Help Join The Motley Fool
Free Article Join Over 1 Million Premium Members And Get More In-Depth Stock Guidance and Research
By Jason Hawthorne - Updated Apr 23, 2021 at 9:31AM

"The people's crypto" doesn't measure up when evaluated like a legitimate currency.

A meme is a funny video or image, often creatively altered, that spreads rapidly on the internet. A popular meme in 2013 was that of a Shiba Inu dog that couldn't spell. It was referred to as a "doge" (pronounced dohj). As Bitcoin gained in popularity that year, two friends decided to create a parody digital currency and call it Dogecoin.

The joke is on everyone else. Dogecoin (DOGE 2.29%) gathered a small group of enthusiasts who organized publicity stunts to raise its profile. The meme-based cryptocurrency has exploded in 2021, up more than 8,000%, and has gained high-profile supporters like Elon Musk and Mark Cuban. Investors are beginning to wonder if the once laughable token will end up being something more. 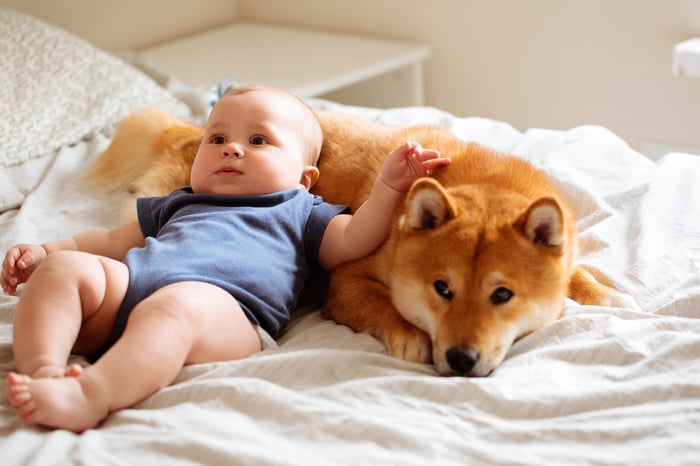 Ultimately, money gets its value because it can be exchanged for goods and services. In one of the most famous exchanges of cryptocurrency, the first bitcoin transaction ever was to pay for two pizzas with 10,000 bitcoin. At Friday morning's value, those two pizzas cost roughly $490 million.

Given Bitcoin's volatility, it may be surprising that people view it as a store of value, but there is a certain logic to it. With its limited supply, it can't be devalued through excessive money printing and inflation. The U.S. dollar is a fiat currency -- government-backed money that is not supported by a physical commodity like gold or silver. That has led to a collapse over the past century.

Unlike Bitcoin, Dogecoin can't be exchanged for much so far. Each coin is worth $0.22, and if you add up every one in existence, they are worth about $28 billion. Bitpay, a cryptocurrency service provider, has partnered with the Dallas Mavericks basketball team (owned by Cuban) to accept Dogecoin for tickets and merchandise. There isn't much else you can buy with it. That will need to change if the eighth-largest cryptocurrency is going to become more than a curiosity.

Another characteristic that defines currencies is the balance between supply and demand. It's this dynamic that drives exchange rates between countries. Like any currency, the balance between supply and demand will significantly influence Dogecoin over long time periods. While Bitcoin is limited to 21 million units, Dogecoin has no such constraint. There are currently 129 billion Dogecoins in circulation, and more get created every day. Perhaps that's why it isn't supported by Coinbase, the cryptocurrency exchange that went public earlier this month.

Despite the supply issues, there is no problem with demand. Its popularity is a sort of continuation from the GameStop drama earlier this year. That was when a Reddit community created a frenzy of buying to burn traders who were short-selling the stock. Musk, the CEO of Tesla, has been Dogecoin's most famous supporter, calling it "the people's crypto" and promising to plant a physical token on the moon. The meme-coin has repeatedly skyrocketed this year after his tweets promoting it. In a microcosm of the herd mentality, the coin jumped more than 100% on April 16 after the world's richest man tweeted a picture of a famous painting by Joan Miro called "Dog Barking at the Moon." Of course, the tweet substituted "doge" for dog.

In the early 1630s, a plague left Dutch citizens with excess money from inheritances. Tulips had been gaining in popularity since arriving from the Ottoman Empire in the 1500s, and the disposable income gave people the means to buy things that were perceived as rare and exotic. They began trading tulip bulbs, and the mere fact that prices were rising whipped people into a frenzy of speculation. That is, until it occurred to them that tulips were easy to grow. The bubble deflated when a bulb failed to sell at auction. No one wanted to be left holding the bag.

Fast forward to 2021 and Dogecoin, a joke knock-off of Bitcoin, is minting new millionaires and attracting celebrity endorsements. There is no limit on the amount that can be created, and it's hardly able to be exchanged for anything. Thanks in part to successive rounds of stimulus payments, interest in it continues to rise. It's not hard to see how this ends.

Just like the first tulip bulb that didn't sell caused everyone to head for the exits in 1636, the fundamentals will eventually overtake the novelty. Even if Coinbase supported Dogecoin and Tesla started accepting payments in it, the unlimited supply makes Dogecoin no better than the fiat currency it would hope to replace.

It is said that one tulip bulb in the Dutch mania could have purchased a mansion. There is no telling how high Dogecoin will climb; the limit really depends on human greed. However, it's hard to see a scenario where it doesn't end up close to worthless eventually. After all, until this year, the cryptocurrency's value was relatively stable at about one-quarter of a cent. For those willing to gamble, Dogecoin might be a fun experiment in the psychology of money. That said, anyone buying it should be willing to lose everything if speculation gives way to anything resembling intrinsic value.