Please ensure Javascript is enabled for purposes of website accessibility
Log In Help Join The Motley Fool
Free Article Join Over 1 Million Premium Members And Get More In-Depth Stock Guidance and Research
By Jason Hawthorne - Apr 23, 2021 at 8:11AM

Only if it can perform like one of the best tech companies around.

In a 2011 op-ed, famed venture capitalist Marc Andreessen argued that software was "eating the world." The argument was that unlike the dot-com bubble of the late 1990s, this new batch of technology companies was set to take over large swaths of the economy. This is now obvious in our everyday lives, but it's harder to appreciate how much software has changed the way companies operate. BlackLine (BL 6.58%) is a perfect example of what Andreessen meant.

The company offers cloud-based solutions to modernize finance and accounting processes. These are often performed manually, they involve many different systems, and they're done under aggressive time constraints. The company is great at scratching this specific itch for companies, but a bright future might already be priced into the stock. 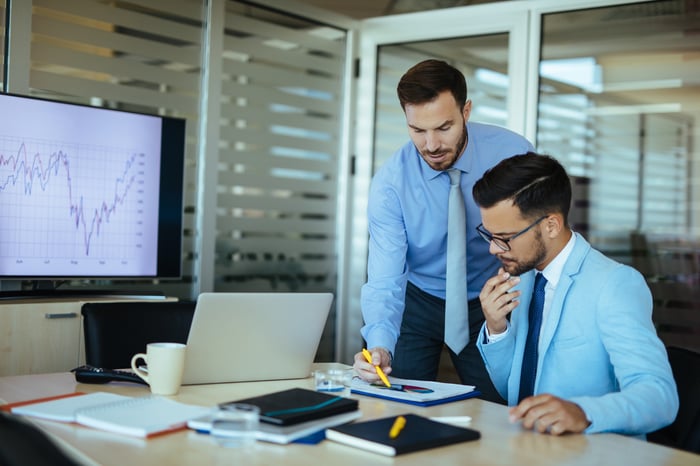 Anyone who has worked in finance will tell you closing the books at the end of a quarter is a pain. BlackLine describes it as "chaos on a deadline," and it's hard to argue with the description. That's why the company built software to automate the task and bring many of the steps inside one package. It's proven invaluable to customers. In fact, almost half of Fortune 500 companies use its products.

Although focusing on finance might seem limiting, it turns out there are plenty of processes that need to be modernized. Another area of focus is accounts receivable. Between the two, management estimates the addressable market is more than $28 billion. That implies the company has plenty of growth ahead, having posted just $352 million in revenue over the past 12 months. BlackLine's growth will come from closing the gap between its 3,400 current customers and the 165,000 it believes are out there.

One advantage BlackLine has in winning new customers is its ability to integrate with the largest enterprise resource planning systems. The traditional approach in finance is to piece together the data from systems like NetSuite, Oracle, SAP, Workday, and others through manual controls and batch processing. BlackLine's software integrates with all of these, bringing the data together and automating many of the steps. Adoption has led to steady growth and impressive cash generation.

Cash rules everything around me

The pandemic seemed to accelerate digital transformation, but much of it happened in e-commerce and collaboration technology like Microsoft's Teams and Zoom Video Communications. This meant BlackLine's back-end business software took a back seat. That showed up in the numbers. The company reported 22% year-over-year growth for 2020, a slowdown from the previous few years. Looking at each quarter, it's clear the pandemic affected sales in 2020. The company entered last year on the back of 27% revenue growth in 2019.

Despite the weaker growth, BlackLine continued to demonstrate its ability to produce more cash with every dollar of sales. Operating cash flow grew 84% year over year to $54.7 million. Free cash flow -- operating cash flow minus investments -- was 77% higher than in 2019.

Can it all be so simple?

Management provided seemingly conservative guidance for 2021, estimating sales would be up about 17% to between $410 million and $415 million. With its stock climbing almost 130% since the beginning of 2020, BlackLine may need to get back to pre-pandemic growth levels to justify the current price. Before the pandemic, it traded at a price-to-sales ratio between 10 and 12. It's now around 19. To figure out what kind of investment that might make the stock, we'll compare it to a company that any technology investor would recognize as successful: Microsoft.

The technology behemoth converts 44% of its sales into operating cash flow and is valued by the market at 29 times that number. For BlackLine, those numbers are 16% and 120, respectively. At its current trajectory, even replicating Microsoft might not make it a great investment right now.

Let's assume BlackLine grows revenue 17% per year for the next decade and reaches Microsoft's level of cash generating ability. That would give the company $1.7 billion in sales and $744 million in operating cash flow in 2030. Valued at the same 29 times, like Microsoft, it would have a market capitalization of $21.6 billion. That's much higher than today's $6.7 billion, but it only represents 12% annual growth over the next decade. It's not bad, but matching one of the best companies in the world is a high bar to clear to only achieve 12% annual returns.

BlackLine could grow faster than it anticipates, or become wildly profitable much sooner than the calculation assumes. As the company adds artificial intelligence to its products, the value proposition for customers only gets stronger. A recent study already shows customers generate $2.77 in return for every $1 spent on its services.

With the stock market at all-time highs and technology stocks at valuations resembling the dot-com bubble, expecting a company to replicate Microsoft's profitability seems like a risky bet. I'd rather buy shares when there is a little less success already baked into the stock price. That would give the company more room to outperform expectations and the stock price more potential upside when it does.

Why Shares of BlackLine Are Falling Today