These two tech companies run the largest public clouds in the world.

Cloud computing has revolutionized the business world over the last two decades. Enterprises no longer need to provision and maintain costly on-premises computing infrastructure. Instead, they can access resources like servers, storage, databases, and software remotely through the internet. Moreover, those resources can be accessed on demand, allowing enterprises to quickly and efficiently scale their operations.

According to research firm Gartner, spending on public cloud services will increase by 19% annually through 2022. That growth should be a tailwind for industry titans like Amazon (AMZN 0.73%) and Microsoft (MSFT 1.28%). Here's what investors should know about these two companies' opportunities in the cloud space in 2021.

Amazon's cloud computing business, Amazon Web Services (AWS), launched in 2006. Today, it's still the clear leader in the space, with a more extensive global infrastructure, a broader product offering, and a larger market share than any of its rivals. In fact, during the fourth quarter of 2020, AWS took 32 cents of every dollar spent on cloud infrastructure services. 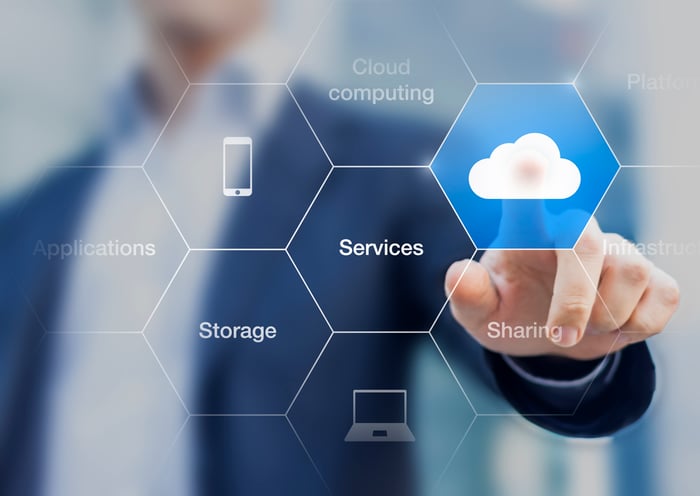 That dominance has attracted a diverse network of partners -- enterprises that use AWS to build solutions for their own clients. For example, consulting firm Deloitte developed its Smart Factory Fabric, a cloud-enabled manufacturing process, using Amazon IoT systems. This suite of applications brings smart manufacturing capabilities to its clients' operations. Notably, Deloitte's role as a consultant to 80% of Fortune Global 500 companies means it's well-positioned to bring new customers to AWS.

Moreover, AWS's operating margin was 30% in 2020. Compare that to the combined operating margin of Amazon's other businesses -- 3%. The cloud segment's high profitability has helped the tech giant bankroll its e-commerce efforts, making it an even greater threat to traditional retailers. In other words, AWS generates enough cash that Amazon can afford to run its e-commerce business at a loss to gain market share.

AWS's lead in cloud computing should help the company grow its top and bottom lines quickly. That, in turn, should drive increased profitability for Amazon as a whole, while allowing it to fund the rapid innovation that has kept AWS ahead of its rivals.

Microsoft launched its cloud computing business, Microsoft Azure, in 2008. While it still trails AWS in terms of market share, the company is executing on a strong growth strategy, and Azure is gaining ground.

Specifically, Microsoft has focused on supporting hybrid and edge computing use cases. This strategy makes sense -- some types of data need to remain on company premises due to privacy or regulatory requirements. That can put an enterprise at a disadvantage, though, if it means they don't have access to cloud services to help them manage, analyze, and secure that data. But Microsoft has a solution.

First, Azure Arc extends Azure's management capabilities across any environment, from private data centers to public clouds. In other words, it allows clients to manage all their digital resources in a unified way, even if some of those resources are stored on-site or in a rival cloud like AWS. For example, Azure Arc makes it possible to train and run AI models using data stored in multiple different locations. That puts Microsoft ahead of rivals like AWS and Alphabet's Google Cloud in terms of its ability to power hybrid AI.

In recent years, Microsoft has also forged partnerships with companies like Datadog, SpaceX, and General Motors that have helped expand Azure's client base. In another partnership that began in 2019, SAP started working with it to migrate its on-premise software customers to Azure. And in 2021, the two companies expanded this partnership, enabling SAP to integrate Microsoft Teams into its own software solutions.

On the whole, Microsoft's efforts have powered strong growth in its cloud computing business. In the company's fiscal 2020 (which ended June 30, 2020), Azure revenue surged 56%, and through the first two quarters of its fiscal 2021, sales were up 49% year over year.

Microsoft's size gives it an advantage over the vast majority of its rivals. And its focus on hybrid scenarios should power continued growth as more enterprises migrate to the cloud.