Please ensure Javascript is enabled for purposes of website accessibility
Log In Help Join The Motley Fool
Free Article Join Over 1 Million Premium Members And Get More In-Depth Stock Guidance and Research
By John Rosevear - Jan 19, 2021 at 9:00AM

Microsoft will take a stake in Cruise; Cruise will deploy its self-driving taxis using Azure.

GM and Cruise said on Tuesday that they have entered into a "long-term strategic relationship" with the software giant to "accelerate the commercialization" of autonomous-vehicle technology.

Microsoft is joining GM, earlier Cruise investor Honda Motor, and institutional investors in a new investment round of more than $2 billion that will bring Cruise's post-money valuation to $30 billion, the companies said. 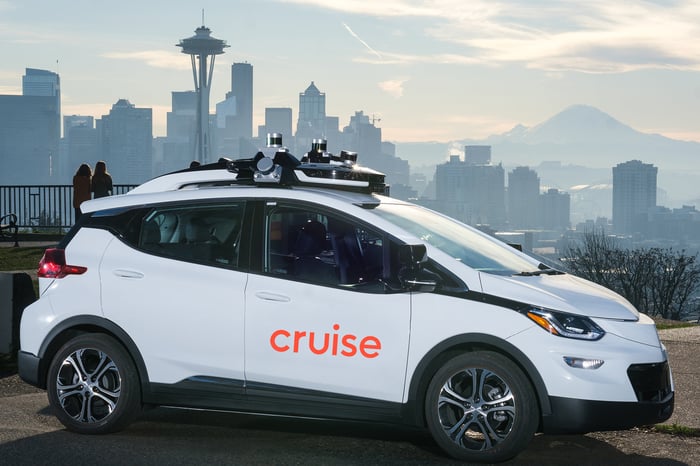 Under the deal, Cruise will deploy its autonomous taxis using Microsoft's Azure cloud-computing platform, and GM agrees to select Azure as its preferred public-cloud provider. In return, Microsoft will be able to draw on expertise from Cruise and GM to try to boost Azure's market penetration in transportation-related segments.

Cruise CEO Dan Ammann, characterizing Microsoft as "the gold standard in the trustworthy democratization of technology," said that the tech giant will be a "force multiplier" as his company moves to commercialize its self-driving taxi fleet.

For Microsoft, the chance to work with Cruise — and to secure GM as a long-term client — helps its ongoing effort to compete with cloud rivals including Amazon's AWS and gives it a stake in an autonomous-vehicle player as the technology heads for the mainstream.

For Cruise, it's another big-league partner that could help it move closer — in both technology and investors' perceptions — to Waymo, the Alphabet-owned company widely seen as the self-driving leader.

Details of the size and timing of Microsoft's investment in Cruise hadn't yet been disclosed at press time.