Please ensure Javascript is enabled for purposes of website accessibility
Log In Help Join The Motley Fool
Free Article Join Over 1 Million Premium Members And Get More In-Depth Stock Guidance and Research
By Rich Duprey - Apr 23, 2021 at 7:15AM

Can third-party delivery be profitable, or should restaurants just keep it in-house.

Despite Domino's Pizza (DPZ 0.19%) building its business on the to-go model, it has never used third-party services to deliver its pizza. Instead, it relies upon its own employees to bring pies to its customers, allowing the pizzeria to maintain a connection with the customer throughout the entire ordering process.

Yet the delivery portion of its business has not been profitable, something third-party delivery companies like DoorDash (DASH -7.40%), Grubhub (GRUB), Just Eat Takeaway.com (JTKWY 13.76%) and Uber Technologies (UBER -4.53%) are increasingly coming to learn.

There's a lot of demand for delivery. It's just not easy making money at it. 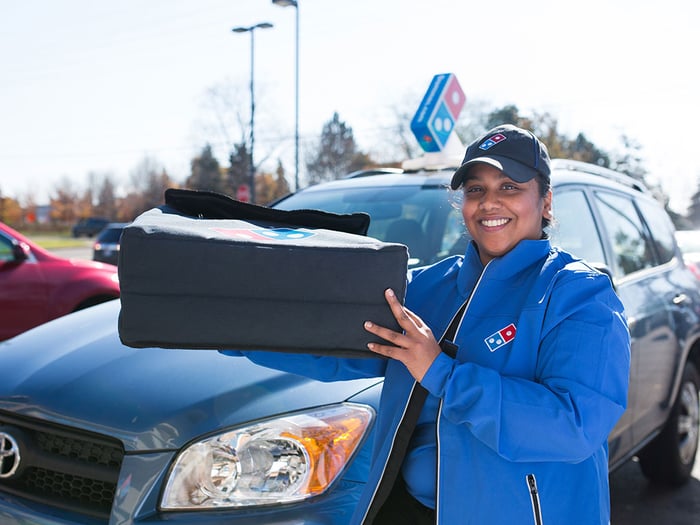 Part of delivery's problem is that the industry is intensely competitive. Dozens of national, regional, and local providers compete for a piece of a finite pie.

In addition to other third-party operators, delivery companies also compete against restaurants that offer their own delivery (like Domino's), grocery delivery companies, meal kit deliveries, and even Amazon and Walmart.

To attract business, the delivery specialists also often offer discounts to the largest chains. But Uber says that may result in negative take rates for it, or revenue as a percentage of gross bookings. In other words, the delivery company ends up losing, instead of earning, money for every transaction.

In addition, delivery companies have had to operate under fee caps that numerous localities enacted during the pandemic, limiting their ability to profit. DoorDash said 73 jurisdictions had imposed limits by the end of 2020, compared to 32 in the previous quarter.

Failing to deliver on earnings

DoorDash is the largest food delivery company by far, with a 53% share of the market, compared to 32% for Uber Eats, and although revenue tripled in the fourth quarter, it still reported a loss of $36 million. And it admits the boom times will come to an end as vaccinations become more prevalent and restaurants reopen fully.

Uber says it's on track to achieve profitability this year, but only on an adjusted basis and primarily because of the rideshare portion of its business. Delivery is still producing large adjusted EBITDA losses.

In the past, Domino's CEO Ritch Allison called out Grubhub as an example of a company that destroyed its profitability by changing its business from a menu aggregator to a delivery company.

And during the pizza shop's fourth-quarter earnings conference call with analysts, Allison said he has "struggled a little bit understanding the long-term economics in some of the aggregator businesses. In 60 years, we've never made a dollar delivering a pizza. We make money on the product, but we don't make money on the delivery."

It's that distrust stemming from the view that third-party food delivery is unsustainable that has kept Domino's from moving away from in-house delivery despite it being a logistical burden and a drag on the bottom line.

But that doesn't mean there will always be a human driver coming to your door with a hot pie; Domino's just partnered with Nuro, a maker of autonomous vehicles, on a pilot pizza-delivery program in Houston using self-driving vehicles.

Still, it seems Allison and Domino's have been on the right side of this debate while DoorDash and other third-party delivery operators are driving the wrong way.

Delivery has been an essential component of how restaurants survived the pandemic, and it may be that they're the ones that eventually outlast the delivery aggregators themselves.