Please ensure Javascript is enabled for purposes of website accessibility
Log In Help Join The Motley Fool
Free Article Join Over 1 Million Premium Members And Get More In-Depth Stock Guidance and Research
By Jim Halley - Apr 24, 2021 at 5:12AM

Their liquid biopsies are giving doctors new and better tools to spot, track, and treat cancers.

Typical blood work can tell physicians a lot of things –- your cholesterol and blood sugar levels, kidney and liver functions, and can reveal enzyme markers for certain diseases as well. Guardant Health (GH -0.52%) and Roche Holding (RHHBY 1.09%) are taking the simple blood test to a new level, helping medical professionals better target the treatments of certain types of cancers through liquid biopsies that use blood or other fluids to track how those cancers grow and change. 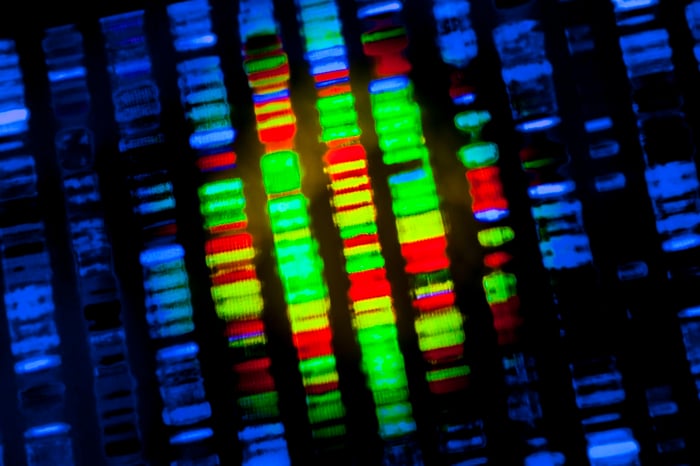 This is a big deal; as opposed to standard tissue biopsies that extract samples directly from tumors, liquid biopsies can more easily determine the nature of tumors that are in hard-to-reach internal organs. A study published in the Annals of Oncology in 2019 reported that these tests can pick up changes in a tumor months earlier than standard tissue biopsies.

The methodology is complex, but the idea is simple -- in order to grow, tumors must extract nutrients from the patient's bloodstream. When they do that, they also shed genetic material into it that can be analyzed to determine what genetic changes and mutations the tumors have. With that information in hand, doctors can prescribe the immunotherapies that will be most effective for that specific patient.

Guardant Health's stock price is up more than 100% over the past 12 months and 20% so far this year. The company's biggest focus is on liquid biopsies to help fight cancer. It sees ample opportunities for sales of its blood tests to grow: Management asserts that they could potentially help more than 100 million people with early cancer screening. Those tests could also aid 15 million with cancer recurrence monitoring, and help physicians target therapies for 700,000 people with advanced cancers.

Roche is making the tests a priority

Swiss pharmaceutical giant Roche has a market cap in the neighborhood of $295 billion and had annual revenue last year of 58.3 billion Swiss francs (about $63.7 billion). Its connection to liquid biopsies is through Foundation Medicine. It purchased a controlling interest in Foundation in 2018, but operates it as a separate company. Roche's annual report places Foundation's net book value at $231 million.

Foundation's liquid biopsy, FoundationOne Liquid CDx, was also approved by the FDA in October. Initially, the approval was only to test for certain genetic markers of ovarian cancer, non-small cell lung cancer, and breast cancer. A month later, the FDA expanded its use to prostate cancer as well.

Roche is well-positioned to take advantage of Foundation's tests. It spent $13.2 billion last year on research and development, which dwarfs the spending of most pharmaceuticals on R&D. Last year, Roche's net income rose 9% to $7.1 billion and operating profit margin rose to 31.1% of sales. But Roche's shares have barely grown, up just 1% over the past 12 months.

The better choice between these two healthcare stocks depends on what kind of investor you are.

Roche is certainly a safer investment in the liquid biopsy space. It has great diversification -- its liquid biopsies are just one part of a much bigger picture. Another plus is that it pays a dividend of $1.2205 per share, which at the current share price works out to a yield of 2.76%. Roche has boosted that payout by 13.91% over the past five years alone, and with a streak of 34 consecutive years of increases behind it, it's a Dividend Aristocrat.

Guardant is a much purer play in liquid biopsies, and as a smaller company, its potential for revenue growth is greater. However, there's also more risk here than with Roche. Guardant lost $93.7 million in Q4 2020, up from a $25.2 million loss in the prior-year quarter. The company has neither the diversification nor the dividend of a giant like Roche. However, its technology has exciting long-term potential. And a larger pharmaceutical company could target Guardant for acquisition, which would drive the stock higher.