Please ensure Javascript is enabled for purposes of website accessibility
Log In Help Join The Motley Fool
Free Article Join Over 1 Million Premium Members And Get More In-Depth Stock Guidance and Research
By Nicholas Rossolillo - Updated Apr 25, 2021 at 11:36AM

Some popular tech themes are in line for a big boost if an infrastructure bill gets passed this summer or autumn.

The Biden administration recently unveiled the first draft of a $2.29 trillion infrastructure spending bill. The massive proposal (which weighs in at just over 10% of annual U.S. GDP) would give some much needed help to some ailing areas of the country and would be spent over the course of the next decade. Boosting the nation's infrastructure is a bipartisan measure, so while there are sure to be changes on many of these items along with some Republican additions, there's a good chance a bill passes later this summer or autumn. 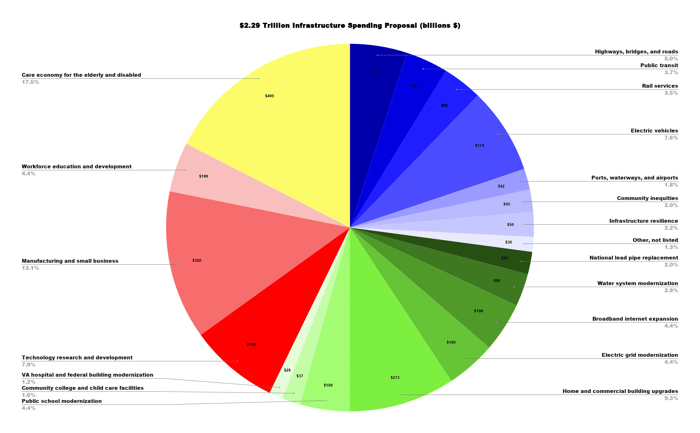 Just over one-quarter of the spending plan ($621 billion) would be allocated to various transportation projects: $115 billion for highways, bridges, and roads; $85 billion for public transit, $80 billion for passenger and freight rail services, and $174 billion for electric vehicles (EVs). Included in the EV package would be an expansion of federal rebates for consumers buying an electric car. Under the existing rebate plan, Tesla (TSLA -2.44%) and General Motors (GM -2.50%) EVs no longer qualify since they've each sold more than 200,000 units.

Water systems, the electric grid, and expanded broadband internet service (with the goal of getting 100% of Americans access to high-speed internet) are also being pushed. That tallies up to another $689 billion, including $111 billion earmarked for things like lead pipe replacement and better water treatment facilities, $100 billion for electric grid modernization and boosting spending on renewable energy, and $213 billion for affordable housing and commercial building energy efficiency upgrades.

As could be expected, trillions of dollars in additional spending are going to get divided up a lot of different ways. But one stock that I think will cover a lot of bases is Berkshire Hathaway (BRK.A 0.20%) (BRK.B 0.15%). Warren Buffett's company has a hand in everything from railroads and trucking to energy to auto parts manufacturing. Many of these businesses have been out of favor with investors in the last decade, but the White House's plan to bolster America's aging infrastructure could provide a new tailwind for Berkshire Hathaway.

Emphasis is also being placed on more modern infrastructure for the 21st century, specifically assets that support digital systems. Thus, I think cloud and edge computing firms (think Cloudflare (NET -2.78%), Fastly (FSLY -5.57%), and Arista Networks (ANET -3.00%) for example) could be in store for a jolt if high-speed internet coverage expands. This leads us to the next big tentpole of the Biden administration's bill: research and development. 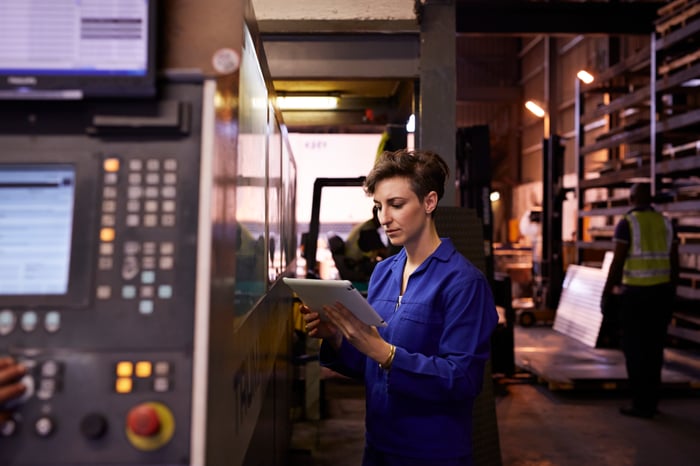 The first draft of the infrastructure bill calls for $580 billion to go toward research and development ($180 billion), workforce education and development to help workers keep pace with the digital times ($100 billion), and help for American manufacturers and small businesses ($300 billion).

Software is revolutionizing the workflow in many of these areas, and the trend could strengthen if these measures in the infrastructure plan pass. Autodesk (ADSK -1.16%) and PTC (PTC 0.46%) are primed for growth if manufacturing technology gets a boost -- not to mention benefit from the hundreds of billions of dollars to be spent designing and upgrading structures themselves. Semiconductors are the basic building blocks of all tech, and chip fabrication here in the states could get some special attention as a global shortage of hardware is showing no signs of easing anytime soon. And as for money allocated toward research and development, NVIDIA (NVDA -3.97%) claims my pick as the top beneficiary with its focus on advancing AI, high-end computing acceleration, and research into climate change, healthcare, and vehicle autonomy.

To be clear, the size and scope of the infrastructure bill will change. But one thing is almost certain: old transportation and energy is going to get some attention, and some popular technology themes are set to get a boost as well.

Acquisition Roundup: What Berkshire Hathaway and Anaplan's Latest Moves Mean for You