Please ensure Javascript is enabled for purposes of website accessibility
Log In Help Join The Motley Fool
Free Article Join Over 1 Million Premium Members And Get More In-Depth Stock Guidance and Research
By Jason Hawthorne - Apr 24, 2021 at 5:10AM

Lawsuits delayed by the pandemic could give shareholders a nasty surprise in the months ahead.

Before the pandemic, the national health crisis on many people's minds was the opioid epidemic. Between 1999 and 2019, the drugs led to the overdose deaths of more than 500,000 Americans. Although many companies have come under scrutiny for their role in the problem, perhaps none is better-known than Johnson & Johnson (JNJ 1.13%).

The biggest U.S. healthcare company has already had one large judgment go against it, and it is actively fighting others. As it and three other drug companies go on trial this week in California, shareholders might be underestimating just how massive a potential verdict could be. 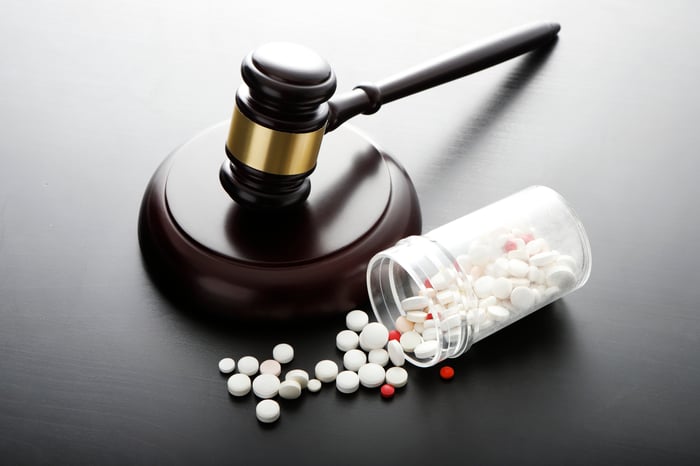 Many opioid-related cases were put off during 2020. Although this one will be conducted virtually, four California counties will begin making the case against Johnson & Johnson, as well as Teva Pharmaceuticals (TEVA 4.92%), Endo International (ENDP 22.42%), and Allergan, a division of Abbvie (ABBV 0.42%). The counties claim the companies used deceptive marketing to downplay the drugs' addictive nature and they should pay for solving the problem they helped create.

The first phase of the trial will determine if the companies should be held responsible. That is likely to take months. If they are, the next phase would be for the counties to make the economic case for penalties and restitution. They are expected to seek $50 billion in damages. It's a massive number and would likely crush the stocks, but is it realistic?

Can history be a guide?

Johnson & Johnson ended the first quarter of 2021 with $9 billion of cash on its balance sheet. That sounds like a lot of money, but it could evaporate quickly if verdicts go against it. To figure out whether the California counties might actually get what they are asking for, we can use the only previous fully litigated judgment. In 2019, the company was ordered to pay $465 million for its role in Oklahoma's crisis. We can use this as a jumping-off point to make an educated guess.

Based on Oklahoma's $201 billion gross domestic product (GDP), we can calculate the percent of annual economic activity the penalty makes up. It's about 0.23%. California's GDP is a massive $2.8 trillion annually, but only four of the state's 58 counties are named in the suit.

Using the population of each, and comparing it to the state's 39.5 million people, we can estimate that the GDP for those counties makes up roughly $1.1 trillion. Now, using Johnson & Johnson's Oklahoma judgment, we can guess that the company's liability in these California counties would be about $2.54 billion.

Of course, this back-of-the-envelope math isn't an indication that the companies will be found liable, or that the judge will deem the argument for financial damages compelling. However, it does give a sense of just how big the problem could be for Johnson & Johnson. With more than 3,000 lawsuits across the country targeting opioid drugmakers and distributors, verdicts could add up quickly. The non-partisan group Society of Actuaries did an analysis just for the year 2018, and estimated the economic effect of the opioid crisis to be $179 billion.

A history of fighting back

One thing shareholders have going for them is the company's tendency to aggressively defend itself against litigation. Many judgments against it over the past decade have been reduced after extended appeals. Unfortunately, there have been a lot of lawsuits to fight.

In 2018, a jury awarded 22 plaintiffs $4.7 billion after they alleged the company knowingly sold talcum powder that contained asbestos, leading to ovarian cancer. The company ultimately lost its appeal, although the damages were reduced to $2.2 billion. Despite the company denying wrongdoing, the product was pulled from shelves in the U.S. and Canada.

In 2019, the company agreed to pay about $1 billion to settle lawsuits associated with its artificial hip. The defective product was discontinued in 2013 but left some patients unable to walk and in extreme pain. The settlement covered about 95% of the outstanding cases.

Last year, the company saw an $8 billion verdict reduced to less than $7 million for its antipsychotic drug, Risperdal. The company still faces thousands of cases alleging it marketed the drug for controlling children with behavioral issues and elderly nursing home and dementia patients, despite it not being approved for that purpose. In 2013, it agreed to pay $2.2 billion for illegally targeting the young and the elderly.

Anyone who owns shares of Johnson & Johnson accepts the potential for billion-dollar judgments. The company consistently fights these suits and has some powerful backers. In fact, even the U.S. Chamber of Commerce is supporting the company in its attempt to appeal the Oklahoma talcum judgment to the U.S. Supreme Court.

Despite the blemishes, it is still the largest healthcare company in the U.S. and manages to keep its brand in relatively high regard. With an administration focused on dealing with the opioid epidemic and pandemic-delayed trials kicking off, the pressure will be on from both regulators and shareholders to put the issue behind them.

Late last year, the company upped its contribution to $5 billion for an all-in opioid settlement with the states. California's demands make it clear that that is woefully short of what is being sought. The longer these trials go on without a comprehensive settlement, the higher the risk of a catastrophic judgment against the company in one of the thousands of suits that remain. Shareholders shouldn't panic, but they shouldn't be surprised if the opioid crisis ends up costing them a lot more than the company has implied so far.