Please ensure Javascript is enabled for purposes of website accessibility
Log In Help Join The Motley Fool
Free Article Join Over 1 Million Premium Members And Get More In-Depth Stock Guidance and Research
By Adria Cimino - Apr 25, 2021 at 6:00AM

They're generating revenue now -- and more is on the way.

Some biotech stocks have impressed us over the past year with massive increases. (For example, Novavax has climbed more than 700% since last April.) It's always great to score a quick gain. But most of the success stories in our portfolios will come over the long term. And that's why the best thing you can do right now is choose companies with solid long-term outlooks -- and hold on to them.

Here, I'll talk about three of my favorite biotech names. They each have products on the market now -- and exciting growth opportunities on the horizon. 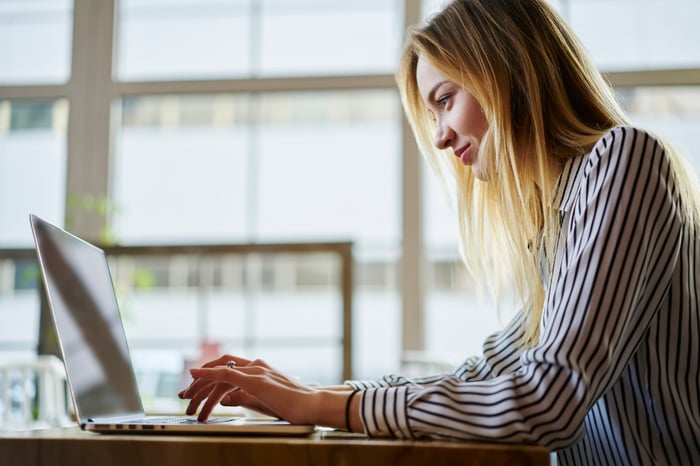 Vertex Pharmaceuticals (VRTX 0.75%) is a giant in the cystic fibrosis (CF) market. The company sells four CF drugs. The newest, Trikafta, launched in late 2019 and quickly became a blockbuster. Growth opportunities for Trikafta include winning approvals in different countries and different age groups. Vertex expects to hold its leading position in the CF market through at least the late 2030s.

But Vertex doesn't plan on relying on CF alone in the coming years. The company's pipeline includes candidates for pain, blood disorders, and type 1 diabetes, among other illnesses.

Vertex and partner CRISPR Therapeutics (CRSP 2.98%) in December announced exciting data from their gene-editing trial in blood disorders. All 10 patients responded to treatment. Just this week, Vertex amended its agreement with CRISPR to take a bigger stake in the program. Vertex now will take 60% of any future profits from the therapy worldwide -- that's up by 10% from the previous agreement.

Vertex shares trade at about 21 times trailing-12-month earnings -- close to their lowest level ever by that measure.

Exelixis (EXEL -3.32%) is in the early days of its growth story. But major revenue may be on the horizon for the oncology company. The company's leading molecule is cabozantinib. It's sold as Cabometyx to treat advanced renal cell carcinoma (RCC) and one of the most common types of liver cancer. The company's revenue has soared since the product's first approval in 2016. 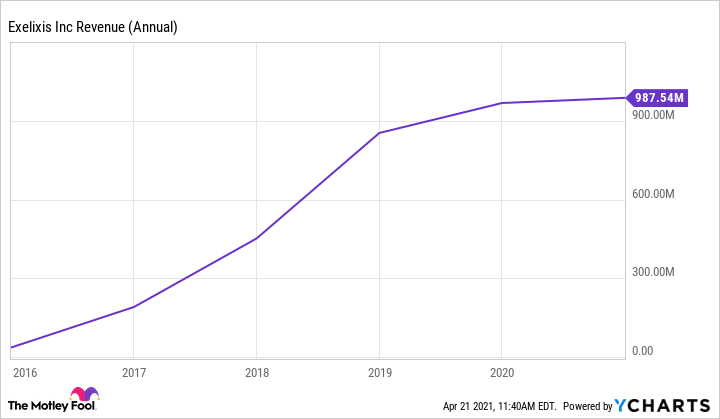 There's a lot more ahead for cabozantinib. Earlier this year, the U.S. Food and Drug Administration (FDA) approved Cabometyx as a combination treatment with Bristol Myers Squibb's blockbuster Opdivo as a first line of treatment for advanced RCC patients. And last month, Exelixis completed enrollment in a phase 3 trial of cabozantinib in combination with Opdivo and another Bristol Myers Squibb drug -- Yervoy. Exelixis and partners are studying cabozantinib in more than 70 trials for various types of cancer.

Exelixis is working on other potential products too. For example, the company soon will start a phase 1 trial of an antibody-drug conjugate for the treatment of advanced solid tumors.

And the exciting news for investors is that this should be Exelixis' first billion-dollar year. The company expects 2021 total revenue to reach the range of $1.15 billion to $1.25 billion.

Seagen (SGEN -0.93%) is another company on the way to major growth. The FDA approved its bladder cancer drug Padcev in late 2019 and breast cancer drug Tukysa a year ago. Seagen also sells Adcetris, a treatment for Hodgkin lymphoma.

Now, Seagen is moving forward to expand indications and bring other candidates to market. The company has requested use of Padcev to include an additional bladder cancer patient group. The FDA is expected to make a decision on Aug. 17. And the FDA has accepted tisotumab vedotin -- an investigational treatment for cervical cancer -- for priority review. The regulatory agency has set a Oct. 10 action date. So, if all goes well, Seagen could have a fourth product on the market by the end of the year.

Last year, Seagen reported record annual product revenue of $1 billion. And this year, the company forecasts as much as $1.3 billion in revenue from its three commercialized products. Seagen has eight early-stage candidates in the pipeline. It also has two antibody-drug conjugate candidates in nine trials. And it's investigating its commercialized drugs in about 20 trials for various indications.

So, there are plenty of potential growth drivers that could push this biotech company's annual revenue higher in the coming years. And that means there is plenty of opportunity for share gains over the long term, too.