Please ensure Javascript is enabled for purposes of website accessibility
Log In Help Join The Motley Fool
Free Article Join Over 1 Million Premium Members And Get More In-Depth Stock Guidance and Research
By Travis Hoium - Apr 25, 2021 at 10:00AM

Spotify wants to dominate podcasts, but Apple is taking a big swing at taking the market back.

Despite being extremely early in podcast distribution, Apple (AAPL 2.14%) neglected its podcast app for a long time, failing to grow subscriptions, streaming advertisements, or exclusive, high-quality content. That left an opening for Spotify (SPOT 0.73%) to build and acquire the tools necessary to make podcasts a success for listeners and producers alike, potentially making it Spotify's biggest business long term.

That dynamic changed on Tuesday when Apple introduced subscriptions to its Podcast app. Subscriptions will allow producers to charge listeners directly for their content. It could be an effective way to monetize content, but does it really hurt Spotify's position in the industry? 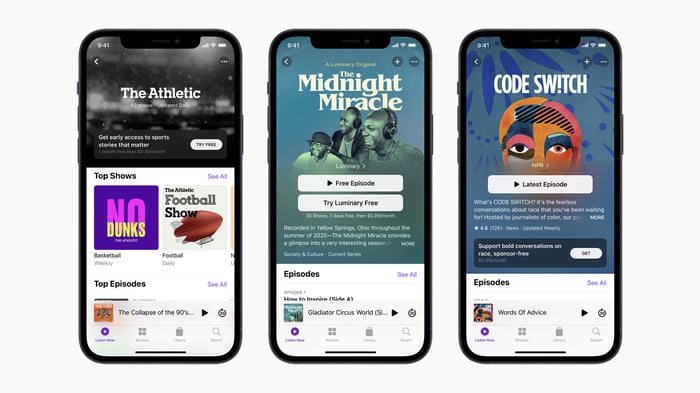 Apple's theory of the case

What Apple is betting on is that easy-to-use subscriptions will be a win-win for producers and listeners. Producers can make money while listeners can get premium, ad-free content. The theory makes sense, but may not be as easy to pull off as you might think.

Print organizations have proven that paywalls are a tough way to build a business model. The New York Times and a handful of other large organizations have had success moving content behind a subscription paywall, but most who've attempted paywalls have failed.

The reason why paywalls haven't made sense on the internet is that a free version of the information users might be looking for is likely only a click away. And information travels so quickly that paying for content is a tough ask for consumers.

Audio may be a little different because the content is unique and consumed differently. A conversation between a podcaster and a guest can't easily be replicated into print or other audio forms like the content of a news article can. So the paywall could work for Apple and podcasters because it's the exclusive place to find the content people are seeking.

The challenge will be discovery. Free podcasts are easy to find and they open up a world of users to podcast producers. Once a podcast goes behind a paywall there's a lot more friction between users and discovery.

Spotify is playing a different game

Apple is a big competitor of Spotify in podcasts, but this move may not upend the company's plans. Spotify already has a subscription business in music and exclusive podcasts, and subscriptions to some podcasts may be coming. But I think the biggest opportunity will be building out an advertising business with the user data and advertiser network to make "free" podcasts profitable.

Podcast production, which Spotify has in its portfolio, is also not dependent on being on Spotify's platform. It has creation tools with Anchor and an editing suite with Soundtrap, just to name a couple of tools. So it's possible that Spotify will make money on podcasts that are made with its tools but distributed through Apple Podcasts.

Do subscriptions make sense in podcasting at all?

For creators, it's great that Apple is providing a new revenue option in its podcast business. But the biggest question facing Apple is whether or not subscriptions make sense at all in podcasts. If listeners don't mind a few targeted ads in a podcast, just as they get with radio content, then the subscription model may not generate as much revenue as ad-supported podcasts.

Aggregation is another thing to think about in podcast subscriptions. Paying one lump sum for access to all podcasts may be appealing, but paying 5-10 subscription fees may be a turnoff. There's a reason music, TV, and now streaming have aggregated content from multiple sources into a subscription and not charged on a per channel or per record label basis.

There's also the medium that makes podcasts slightly different from any other streaming service to date. Podcasts are a passive medium that you can listen to while working out, driving, or doing almost anything throughout the day. There's no action needed, unlike clicking on an article or actively watching TV. Given the passive nature, ads may not be the end of the world for podcasts. And if discovery outweighs the revenue from subscriptions, I could see an ad model working out better than subscriptions long term.

As an Apple podcast listener, I'm happy to see the company put more attention into audio content. But as a Spotify shareholder, I don't think it's as big a threat as some investors might think. And even if subscriptions are successful, Spotify is small and nimble enough to adapt to the market as it grows, so my money is still on Spotify winning the podcast battle long term.