Please ensure Javascript is enabled for purposes of website accessibility
Log In Help Join The Motley Fool
Free Article Join Over 1 Million Premium Members And Get More In-Depth Stock Guidance and Research
By James Brumley - Apr 25, 2021 at 8:15AM

The king of streaming is at a point where it must choose between strong profit margins and strong subscriber growth.

If you follow Netflix (NFLX 3.29%) you likely already know the company missed expected subscriber growth projections when it reported its latest earnings. Specifically, the streaming giant's net addition of a little less than 4 million paying customers fell short of forecasts for 6.25 million new members. Some see this news as a sign that the pandemic-prompted swell of streaming sign-ups is all but over.

Largely lost in the noise of a membership shortfall, however, is that Netflix more than doubled its year-over-year profits. The first quarter's bottom line of $1.7 billion is a 140% improvement on net income of $700 million earned during the first quarter of 2020.

So what's the problem? The reason profits grew so dramatically appears to be the same reason subscriber growth was so poor. If this dynamic represents the new normal, it's a hint that Netflix may have to choose strong profits or strong customer growth because it can't have both. 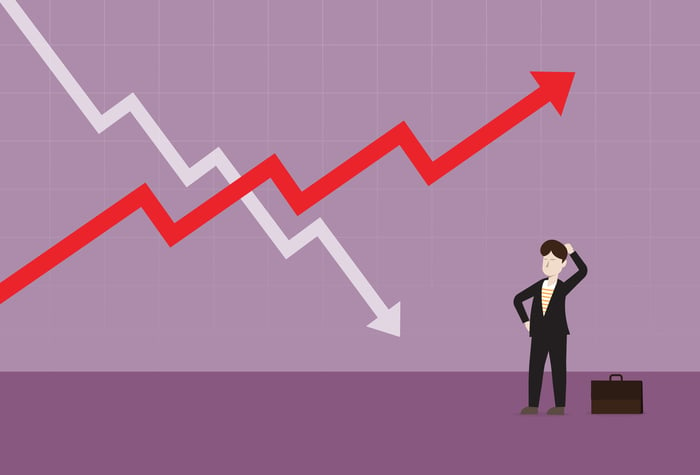 For the majority of its existence, Netflix has faced no serious competition. Walt Disney (DIS 1.08%) only launched Disney+ in late 2019, and HBO Max from AT&T (T -0.66%) wasn't available until the middle of last year. Disney's Hulu and Fox Corp.'s ad-supported platform Tubi have been around longer, but have only become contenders within the past couple of years. And that's just a sampling of new (or newly budding) streaming names.

Netflix hasn't responded in earnest, however, opting to play more defense against the pandemic than it's played offense against streaming newcomers. Namely, marketing spending has dwindled -- a lot -- since early 2020 rather than growing in step with revenue. Last quarter's marketing outlay of $512 million was barely better than the year-ago figure of $504 million, and that $504 million was the second-lowest amount Netflix had spent on marketing in any quarter since the final quarter of 2017. 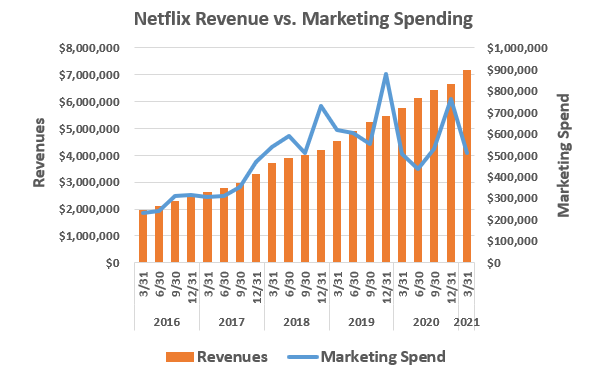 One can't say with certainty the cause-and-effect relationship in play here is an absolute one. The company's subscriber additions are being held up to tough comps, after all. In the first quarter of last year, Netflix picked up nearly 16 million new subscribers, and it added another 10 million in the second quarter of 2020. It's arguable that anyone who wanted to subscribe to Netflix is already on board.

But there's growing evidence that consumers are simply more responsive to other on-demand options despite Netflix's dominance of the market.

Research outfit Kantar delivered the latest salvo in this argument, estimating HBO Max picked up more of last quarter's new U.S. streaming business than any other platform: 14.4% of new customers. Prime, from Amazon, won second place in terms of streaming subscriber additions. ViacomCBS's Paramount+ (formerly known as CBS All-Access) came in third with its 11.8% share last quarter, followed by Disney's Disney+ and then its Hulu. Netflix was sixth-best in terms of new U.S. customer growth, winning only 8.5% of the nation's new on-demand business.

In a similar vein, Ampere Analysis suggests Netflix's share of the U.S. market fell from 29% to 20%.

This doesn't necessarily point to subscriber losses. It does, however, make it clear that at least some new streaming customers are choosing a rival's platform over Netflix.

It's not just cost-cutting on marketing that may ultimately be undermining Netflix's dominance, either. The company spent relatively less on content, too, during Q1. The first quarter's $3.9 billion cost of revenue (what it spent on content) is only 7% more than the year-ago figure even though revenue grew by an incredible 24%. The graphic below puts things in perspective. 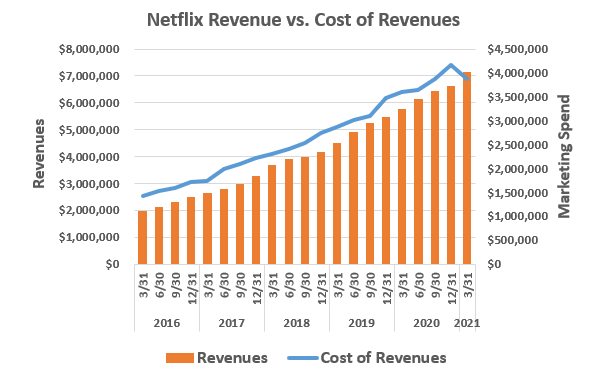 On the surface, it may seem irrelevant. The streaming giant still has a huge library of stuff to watch, after all.

It's not that simple though. Not only does Netflix need more kinds of content to keep its now-bigger audience entertained, it needs more new content to do so. CFO Spence Neumann explained during a post-earnings conference call, "We also have a near-global shutdown in production which we've been ramping safely and at scale through much of last year and into this year, but it did push some key title launches into the back -- kind of the back end of -- of this year," which he conceded "does create some noise" in terms of subscriber growth.

To this end, the company's already assured investors it's going to ramp content spending back up to $17 billion this year, a jump from 2019's budget of $15 billion and on par with 2020's pre-pandemic content budget of $17 billion.

It's possible that the first quarter's weak subscriber growth is just the result of bad timing.

Possible, but unlikely. Other streaming services are adding more paying members with what appear to be more aggressive ad campaigns and -- in some cases -- more aggressive spending on content. For instance, AT&T's WarnerMedia was willing to undermine box office ticket sales of its new $155 million flick Godzilla vs. Kong by offering it at no additional cost via HBO Max. Kantar says it picked up more new streaming subscribers in Q1 as a result.

Rather, Netflix may mostly be struggling with subscriber growth simply because it's spending too little on the effort.

If that is indeed the case, don't look for last quarter's (or even last year's) profit growth and profit-versus-expense profile to become the new norm. It's the exception to the norm. Netflix has already told us it's going to be spending more on content, but don't be surprised if the company again ramps up marketing spending. That's certainly what it should do anyway, given how competitive the streaming market has become in just the past year.