Please ensure Javascript is enabled for purposes of website accessibility
Log In Help Join The Motley Fool
Free Article Join Over 1 Million Premium Members And Get More In-Depth Stock Guidance and Research
By Beth McKenna - Apr 26, 2021 at 10:00AM

Investors in the connected home-exercise leader should focus on guidance, supply chain issues, and what management says about the Tread+ safety issue with the CPSC.

Peloton Interactive (PTON -2.50%) is slated to report its results for the third quarter of fiscal 2021 (January through March) after the market close on Thursday, May 6. A conference call with analysts is scheduled for the same day at 5 p.m. EDT.

The connected home-exercise leader is heading into its report on a mixed note. On the positive side, the company has sprinted by Wall Street's consensus estimates for both the top and bottom lines for three consecutive quarters. The COVID-19 pandemic has been providing a powerful catalyst for growth. Many former gym-goers along with others who have been home more often have embraced Peloton's internet-connected stationary bikes and treadmills.

On the other hand, the report will come on the heels of negative publicity stemming from the U.S. Consumer Product Safety Commission (CPSC) requesting Peloton recall its Tread+, and CEO John Foley's response that the company has "no intention of doing so." This product has been involved in the death of one young child and nearly 40 reported incidents involving children, according to the CPSC. The federal consumer safety agency has urged consumers who have young children to stop using this product, which it said can also pose a danger to pets. Peloton has disagreed with this advice, contending the product is safe when all instructions and warnings are followed.

Even before this dispute with the CPSC, some investors were concerned about the company's ability to keep growing at a brisk rate in a post-pandemic world. Indeed, shares had already pulled back about 23% this year, before falling another 13% last week following the issue with the safety agency. (A stock chart follows below.)

Despite the 2021 pullback, shares of Peloton (which held its initial public offering in September 2019) have gained 238% over the one-year period through Friday, April 23. The S&P 500 has returned 52% over this period.

Management guided for revenue of $1.10 billion, representing growth of 110% year over year. It also said it expects to end the quarter with 1.98 million connected-fitness subscriptions. While the company doesn't provide earnings guidance, it did issue a gross margin outlook of about 35%.

While both results beat analysts' expectations, the profit result was the big outperformer. The Street had been looking for EPS of $0.09 on revenue of $1.03 billion.

The earnings call should be more valuable than usual. Analysts will probably be focusing on the treadmill safety issue. That said, Wall Street analysts often shy away from asking management all the tough questions that individual investors want to know because they don't want to risk offending top management teams.

A public spat with a federal agency whose aim is to protect consumers is not a good look, even if one agrees with management's stance. So, the company does have some degree of potential reputational risk, in my view.

The treadmill safety issue might hurt future financial results. Thus, investors should place even more importance than usual on guidance. Given the company's record on guidance increases, if management doesn't raise its outlook for full-year fiscal 2021, investors should take that as a possible sign that it believes the treadmill issue could immediately interrupt its growth trajectory.

This does not mean that you should view a hike to full-year guidance as a sign that management does not expect anything more than a negligible negative impact on its business from the Tread+ issue. Peloton was already about halfway through its fiscal fourth quarter when the CPSC requested the recall. Moreover, it also has a big order backlog. In other words, even if the treadmill safety issue does hurt the company's business, it will likely not begin doing so for another quarter or two.

So, what should be telling is Peloton's guidance for the first quarter and full year of fiscal 2022, which management will probably issue when it releases its fiscal Q4 and full-year 2021 results in a few months. Hopefully, it provides organic revenue expectations for these periods, which would exclude the expected sales contributions from Precor, the commercial market-focused exercise equipment manufacturer that it recently acquired. 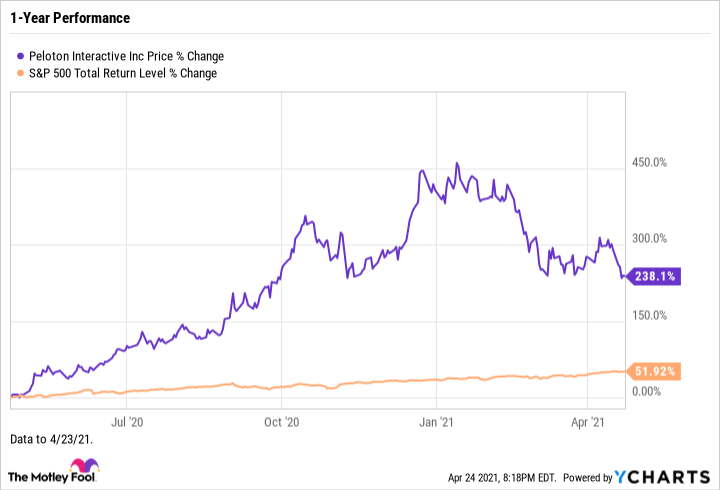 Investors should focus on what management has to say about order-to-delivery times. Many consumers have had extended wait times for their Peloton exercise machines, and it's likely this ongoing issue has caused the company to lose some potential business.

The company's significant supply chain issues have stemmed from its production capacity constraints and pandemic-driven congestion at the Port of Los Angeles.

On last quarter's earnings call, president William Lynch said, "I would say by mid to late spring we should be in the below four-week order-to-delivery (OTD) timeframe [for the two bike products, Bike and Bike+]." But that was a walk-back of his comments on the prior quarter's call, where he said the company felt good about getting "Bike OTDs back to ... inside of two weeks, as we get through [fiscal] Q2. And then Bike+ ... that's going to take a while into [fiscal] Q3 [to get that product to within a two-week OTD window]."

Wall Street is currently modeling for fiscal Q4 2021 revenue to increase 92% year over year to $1.16 billion. Analysts also expect earnings per share of $0.02, down 93% from $0.27 in the year-ago period. This projected drop is probably largely due to the company's heavy investing in growth initiatives and its actions to improve its order-to-delivery times -- such as paying for expedited shipping -- which management said last quarter will hurt its profits in the near term.

The stock market looks ahead, so a post-earnings move in the stock should hinge more on guidance than on fiscal Q3 results. Even with a stronger-than-expected outlook, however, the stock will likely be under pressure, in my view, unless the company has made solid progress on its supply chain issues and investors are satisfied with what management says about the Tread+ issue.

Mark your calendars for Peloton's earnings release: Thursday, May 6, after the market close.