Please ensure Javascript is enabled for purposes of website accessibility
Log In Help Join The Motley Fool
Free Article Join Over 1 Million Premium Members And Get More In-Depth Stock Guidance and Research
By Alex Carchidi - Apr 27, 2021 at 6:33AM

These companies are already making great strides where few dare to tread.

Buying a stock right off its initial public offering (IPO) is a gamble, but daring investors know that it can pay off. Especially for companies that are expected to be growing right out of the gate, getting in during the market's initial feeding frenzy sometimes means buying a stock when it's as cheap as it will ever be.

In this vein, Recursion Pharmaceuticals (RXRX 3.56%) and Biomea Fusion (BMEA -6.93%) are a pair of biotechs that had their IPOs last week, and both have unique value for investors that could make them worth a (speculative) buy.

Recursion's information technology-heavy approach to drug discovery could make it a rising star on the basis of its already extensive list of development collaborations alone. In contrast, Biomea is a more traditional biotech that's taking a highly risky yet deeply innovative approach to make previously intractable conditions into low-hanging fruit. Let's take a closer look at each one to see why they're special. 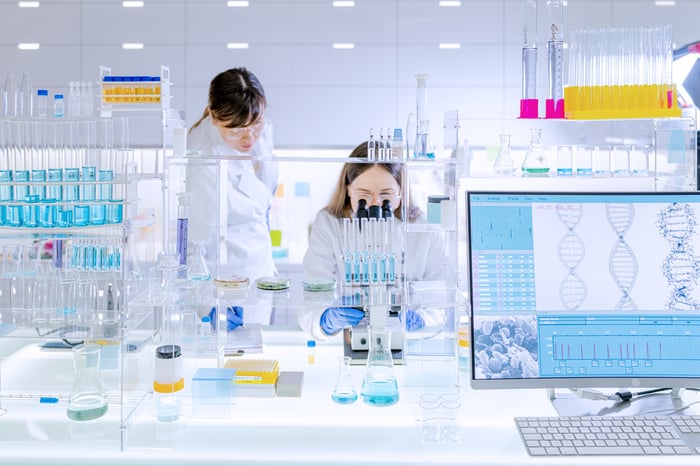 As a biotech, Recursion stands out because it emphasizes both artificial intelligence-driven drug discovery and automated experimentation in the lab. Rather than relying on human effort to research potential drugs and their targets, the company's Recursion Operating System relies on big data technologies to identify the most promising candidates to address given diseases. Then, its strategy is to use laboratory robotics to experimentally validate the candidates, cutting down on labor utilization during early prototyping.

Recursion is hardly the first biotech to use robotics and machine learning, but it is probably the first to try to marry these two segments of the drug development value chain under the same hood in such a seamless fashion. That's quite exciting for investors, even if the benefits of such a marriage are yet to be proven in financial terms.

Notably, Recursion already has a powerful ally in its corner thanks to its drug discovery collaboration with Bayer, a major German biopharmaceutical conglomerate. Per the terms of the agreement, Bayer will pay the company to develop up to 10 programs, each of which could command payments up to $100 million after the relevant project milestones are met. Separately from its projects with Bayer, Recursion also has four phase 1 clinical trials in its pipeline, all of which target rare diseases which are so far unaddressed by the market.

So far, the company is off to a running start. After ending its IPO on April 20, Recursion is sitting pretty on $501.8 million in gross proceeds. That's more than enough to fuel its growth for the next few years, considering that in 2020 its operating expenses were only $88.58 million. For investors seeking a technology-heavy and highly innovative company to speculate on, this stock should be near the top of the list.

Biomea aims to tackle certain cancers using its ultra-long-lasting "irreversible" small-molecule drugs, which you'll need to understand at least a little bit to see why the stock is worthwhile.

Being irreversible means that once the company's drugs reach their physiological target on a tumor cell, they stick to it and don't ever become dislodged. So, the target is inhibited from doing whatever nefarious job the tumor cell might want it to do -- like replicating in overdrive, for instance. Simple, right?

The company's lead program, BMF-219, is a drug that irreversibly inhibits a protein called menin, which is implicated in a handful of different cancers. The risk inherent to the company's approach is that irreversible binding drugs tend to be difficult to develop and entail serious safety concerns.

But the benefits are also substantial. Because they permanently inhibit their physiological target, the drugs can provide long-lasting benefits, especially where a reversible drug might get cleared from the patient's system after a brief period of effectiveness. And, in some cases, irreversibly binding to a target can actually result in the tumor cell being entirely destroyed. Nonetheless, the company is still in preclinical testing, so there's still a lot to prove in terms of safety and efficacy.

On the bright side, Biomea has plenty of time to work on its pipeline projects. After its IPO closed on April 20, Biomea reported that the gross proceeds were $153 million. In 2020, it only spent $5.33 million in operating expenses, which is quite minimal in comparison to other biotechs at this stage. This is on top of $56 million of Series A financing that Biomea secured late last year.

Much like Recursion, this stock is a great option to add to the most speculative portion of your portfolio, especially if you want to benefit from the full price-boosting effects of the entire drug development process.