Please ensure Javascript is enabled for purposes of website accessibility
Log In Help Join The Motley Fool
Free Article Join Over 1 Million Premium Members And Get More In-Depth Stock Guidance and Research
By Neil Patel - Apr 27, 2021 at 8:09AM

A strategic pivot years ago has set this news brand up for tremendous success.

Investing in turnaround situations is usually risky. But when a company is already showing signs of major progress, it's wise to take notice.

Accepting the fact that its print and advertising revenue was in permanent decline, The New York Times Company (NYT 0.21%) is now starting to benefit greatly from a vital strategic shift made years ago.

This is now an online-first business focused on subscriptions, positioning it well in today's digital media ecosystem. Investors need to pay attention: The company's best days are yet to come. 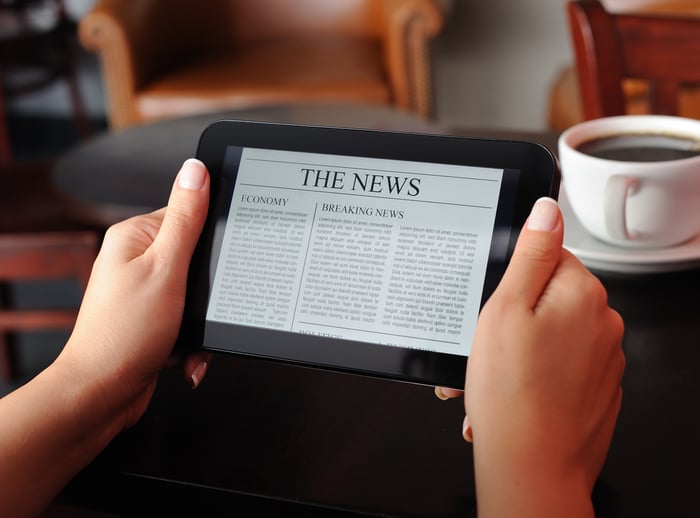 From April 2001 to April 2011, the company's stock fell nearly 80%. What happened in this decade that caused such a huge loss of value?

For starters, revenue declined from $3 billion in 2001 to $2.3 billion in 2011 primarily due to shrinking print and advertising business. Readers were increasingly seeking out free news platforms on the internet, and Facebook and Alphabet's Google were attracting most of the money being spent on digital ads.

As of Dec. 25, 2011, The New York Times was in rough financial shape. The balance sheet only had $125 million in cash compared to $773 million in debt and $985 million in pension and post-retirement benefits obligations. To make matters worse, the company had disparate investments in the Boston Red Sox, the Liverpool soccer team, and a NASCAR racing team. None of these made any sense.

It was time for management to steer the ship in the right direction. Besides shedding noncore assets and gaining a better financial footing, 2011 ended up being a turning point for the business for another very important reason.

It was at this time that the company required its online readers to sign up for a subscription, doing away with a reliance on advertising dollars and putting attention squarely on producing quality content. The New York Times had upgraded its business, and things have looked good ever since.

The 7.5 million total subscribers (print and digital) at year-end 2020 are a massive increase from the 1.5 million the company had in 2011. And 2020 was the first time in the company's history that digital subscriptions generated the most revenue of any segment.

With a total addressable market of 100 million people worldwide who are willing to pay for digital news in English, I think it's totally realistic and maybe even conservative to expect 1.5 million digital subscription additions annually over the next five years. This is slightly less than the average for 2019 and 2020, and should give the business 14.2 million digital-only customers by 2025. At an average revenue per user (ARPU) of $100 (higher than the $89 today), that equates to $750 million in incremental high-value revenue.

The New York Times' news-only offering, as well as supporting products like Cooking and Games, provide customers with a wide array of choices. As the company attracts these users and leverages its fixed costs (mainly paying wages and benefits to its journalists), earnings should expand substantially.

The New York Times is already a powerful and widely recognized brand, but now it's beginning to look a lot like the Netflix of news. Subscriptions bring in recurring revenue, and not having to depend on advertising as much allows the focus to be solely on its users' needs. Additionally, because the product is digital (online news), there is essentially no extra cost to serve more readers as the business grows.

The New York Times, however, has one key advantage when compared to the king of streaming. Costs to create content are significantly lower. In 2020, Netflix's cost of revenues (a proxy for content expense) was 61% of total sales, compared to 54% for the news company. Sure, the size of the potential market for digital news customers may be a fraction of what it is for streaming, but this characteristic is still noteworthy.

Turnarounds seldom turn, according to Warren Buffett. But this situation is already showing signs of progress, and investors need to take a closer look. Adding this stock to your portfolio can end up being a very lucrative decision.