The social media giant delivered strong 2020 earnings not only through growth, but also through operational prowess.

Social media companies were big beneficiaries of the COVID-19 pandemic. Naturally, having consumers confined to their homes meant more time spent in front of screens. This really showed up in the numbers, with most companies in the sector experiencing a spike in monthly active users on their platforms. Facebook (META -0.76%) converted this tailwind into a huge earnings boost, but not simply because it had strong increases in users or even revenue. The company also managed its growth in costs really well, putting its operational wherewithal on full display. It could draw some key lessons from this period, and run a slightly leaner business to supercharge its bottom line. 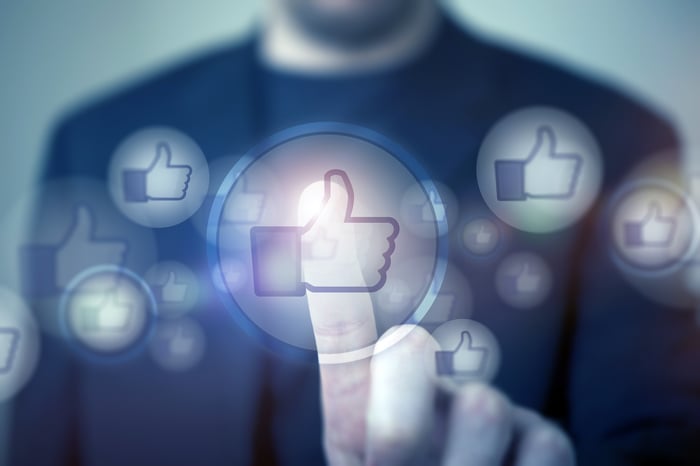 The business of social media

Facebook is the standout among social media technology companies, which have typically struggled to generate profits. Year after year, the company attracts steady user growth and turns those newcomers into revenue, thanks in part to fantastic acquisitions like Instagram and WhatsApp.

The company delivered 57% full-year 2020 earnings growth, beating consensus analyst expectations by about 22%. Now, analysts on average are expecting earnings to grow by over 30% in the next two years.

While Facebook had solid 2020 revenue growth of 21%, its meager 14% growth in operating expenses really stood out. For context, the average annual growth in operating expenses from 2017 to 2019 was 51% -- making this a significant achievement for the company's profitability. The company did deduct $6.2 billion in previous charges from legal fights with the U.S. Federal Trade Commission and BIPA class action, but adding those costs back in brings total expense growth to 27% -- still a large reduction over previous years.

Sales and marketing costs contributed to this story, growing just 17% from the previous year. This expense grew 66% and 25%, respectively, in 2018 and 2019 . It remains to be seen whether 2021 will see a further slowdown in this metric once the effects of the pandemic are over and normal life resumes. The company may have to invest more marketing dollars to encourage engagement.

Facebook also kept headcount growth (new staff) fairly steady at 30%, whereas the average of the two previous years was 34%.

Overall, if the company can continue tapering further expansions in costs and keep them below trend, it could unlock enormous value at the bottom line.

Despite hosting over a third of the entire planet in its social media ecosystem, the company still manages to add hundreds of millions of new users each year.

More impressively, revenue per monthly active user has grown over 60% in the last four years, providing Facebook with the flexibility to invest heavily in growth while still remaining profitable.

There are signs of growth deceleration in revenue per monthly active user -- it's hard to scale any business exponentially, or forever -- which could be a sign the business is maturing from its volatile growth phase. Facebook might be on track to separate further from its counterparts in the sector, by continuing to operate as a reliable source of steady earnings.

Value, with some external risk

Based on its April 22 closing price of $296.52, Facebook trades at 26 times estimated 2021 earnings, and 21.8 times estimated 2022 earnings. If the company continues on its current trajectory of revenue and expense growth, there is a possibility it will outperform current expectations. However, the stock still represents value now, trading at 30 times 2020 earnings compared to the S&P 500's near 40 times.

There is a cloud of uncertainty surrounding the impact of Apple's new iOS 14.5 update, which will require companies like Facebook to get consent from the users it wants to track. It could mean hundreds of millions of users opting out of letting Facebook follow them around the internet, which will impact advertisers' ability to target them. The company says it's well positioned to handle this, with new features like Facebook Shops and Instagram Shops generating significant traction already -- basically giving brands the power to sell directly to consumers through the actual social media platforms.

Investors should watch this closely. If Facebook can deflect any negative impacts of these external changes, it could be set for further growth at the bottom line.