Please ensure Javascript is enabled for purposes of website accessibility
Log In Help Join The Motley Fool
Free Article Join Over 1 Million Premium Members And Get More In-Depth Stock Guidance and Research
By Beth McKenna - Updated Apr 30, 2021 at 10:37AM

In Q1, the e-commerce titan's business continued to get a tailwind from the pandemic.

We can probably attribute the market's initial reaction to both revenue and earnings sailing by the Wall Street consensus estimates, as well as second-quarter revenue guidance coming in higher than analysts had been expecting. Here's an overview of the technology-giant's quarter, along with its guidance. 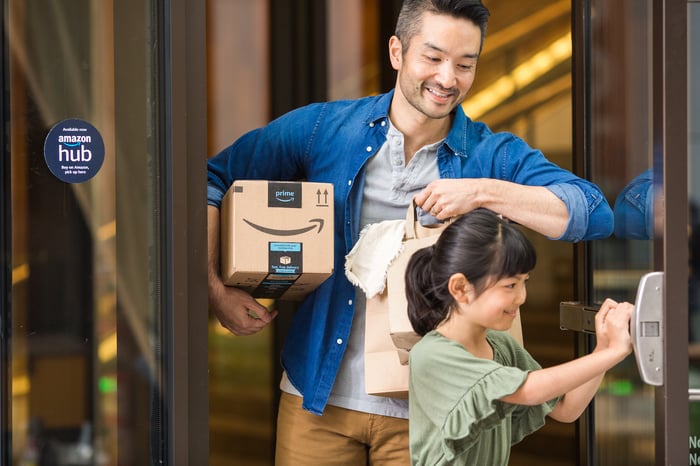 Amazon's e-commerce businesses around the world continued to get a boost from the COVID-19 pandemic. Many consumers are still avoiding brick-and-mortar stores as much as possible.

For context, last quarter (the holiday quarter), year-over-year revenue growth in the company's North America, international, and AWS segments was 40%, 57%, and 28%, respectively.

Operating income increased 123% year over year to $8.9 billion, which crushed Amazon's guidance of $3 billion to $6.5 billion.

Operating cash flow increased 69% year over year to $67.2 billion for the trailing 12 months. Free cash flow rose 9% over the same period to $26.4 billion.

For Q2, Amazon guided for net sales in the range of $110 billion to $116 billion, which would equate to year-over-year growth of 24% to 30%. This outlook assumes Prime Day will occur in the second quarter, rather than in its traditional spot in the third quarter. (Last year, it was held in the fourth quarter due to the pandemic.) The company's entire guidance range exceeds Wall Street's consensus estimate of $108.7 billion.

For some context, going into the report, Wall Street had been modeling for Q2 EPS growth of 5% year over year.

In short, Amazon turned in a super quarter -- again -- and its outlook remains bright.