Please ensure Javascript is enabled for purposes of website accessibility
Log In Help Join The Motley Fool
Free Article Join Over 1 Million Premium Members And Get More In-Depth Stock Guidance and Research
By John Ballard - Apr 29, 2021 at 8:10AM

See why the streaming platform's stock price soared last year -- and why it's well positioned for further gains.

It's estimated that more than a third of U.S. households will have eliminated their cable bill by 2024. Meanwhile, Roku (ROKU 3.92%) continues to add millions of new users to its platform every year, which is pointing to big returns for investors.

Here are three charts that illustrate why Roku remains a great investment.

Despite increasing competition, more people are flocking to Roku. This chart shows how consistent the company's growth in active accounts has been in recent years.

Big tech giants have deep pockets and their own TV operating systems, but Roku keeps winning for a few reasons. One is that the market for TV software is shifting to a licensed model, which favors Roku's business strategy.

Alphabet and Apple use their mobile operating systems as the basis for their TV software, which also attempts to tie users into these companies' other apps and services. However, Roku is the only operating system specifically designed for TV, which has led to more opportunities for it to gain market share.

Roku works with TV manufacturers to make TVs that cost less, are easy to use, and get regular software updates, unlike the operating systems that some manufacturers include in their TVs. It's a major competitive advantage when you can buy a smart TV for around $200 that already has Roku's operating system pre-installed.

Roku monetizes its users in a variety of ways. It offers ad-supported video through The Roku Channel, and it even makes money from placing branded buttons on its remotes.

The company has a revenue-sharing agreement with content distributors, so when a user subscribes to a streaming service through Roku's platform, the company gets a cut for as long as the user remains a subscriber.

Roku also sells ad placements on the home screen, so it makes money every time a user turns on their TV.

All of these different avenues for monetization have led to strong growth in average revenue per user (ARPU). This metric has steadily climbed from $6.48 in Q4 2015 to $28.76 at the end of 2020, and it represents the inherent value of Roku's platform.

As the growth in active accounts indicates, Roku has become an important part of content owners' distribution strategy, especially for those that don't have the means to monetize undiscovered gems. Roku has the user reach and capabilities to know what its users like to watch and how to monetize the content.

A good example is the The Roku Channel, which generates a significant amount of advertising revenue for the company and is growing faster than the rest of the platform. Roku added more than 50 linear channels to The Roku Channel in the fourth quarter of 2020 with live channels drawing record viewership. It also recently acquired the global rights to Quibi's content, which the company has now rebranded "Roku Originals," signaling greater ambitions in streaming.

Its growing audience is driving higher revenue and providing the company more cash to reinvest in new features and more content. Total revenue grew 58% in 2020 to reach $1.78 billion. Most importantly, cash from operations reached $148 million and is climbing along with revenue. 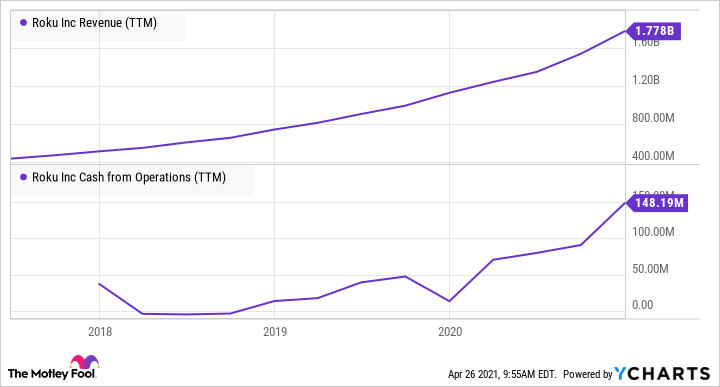 With more than 50 million active accounts, Roku has conquered cable and is now riding the tsunami wave of people turning to streaming TV services in massive numbers. Management believes the market will eventually converge around a single licensed operating system with a few niche platforms trailing the leader. That leader is increasingly looking like Roku.