Please ensure Javascript is enabled for purposes of website accessibility
Log In Help Join The Motley Fool
Free Article Join Over 1 Million Premium Members And Get More In-Depth Stock Guidance and Research
By Sushree Mohanty - Apr 29, 2021 at 8:32AM

A forgotten pot stock could turn around this year.

The popularity of cannabis players like Aurora Cannabis (ACB 0.74%) and Canopy Growth (CGC -3.56%) means other good growth stocks in the industry can sometimes be overlooked. Canada-based HEXO (HEXO -1.66%) is basically in the same boat as Aurora Cannabis, but investors remain focused on Aurora, which gained big name recognition when it made some investors millionaires by riding the wave of Canadian cannabis legalization in 2018.

Even though cannabis sales in the country were sky-high in 2020, Canadian companies failed to see a drastic surge in revenue because of various industry headwinds. Regulatory challenges delayed the opening of legal stores, for example. HEXO's lower revenue growth and failure to achieve profitability dragged down its stock price last year to a point that it traded below $1, which is against trading compliance rules. It even received a delisting warning from the New York Stock Exchange in May 2020. Similar to Aurora, HEXO opted for a 1-for-4 reverse stock split to boost its stock price and save itself from getting delisted. (Aurora's 1-for-12 reverse split took place in May.)

Management at HEXO is making an effort to boost its revenue in the calendar year 2021 by taking advantage of the ongoing cannabis boom, as well as the launch of new recreational products that are in huge demand. While many investors remain focused on bigger players like Aurora, recent second-quarter fiscal 2021 results showed some positive signs for HEXO. Let's take a look at how its 2021 is shaping up. 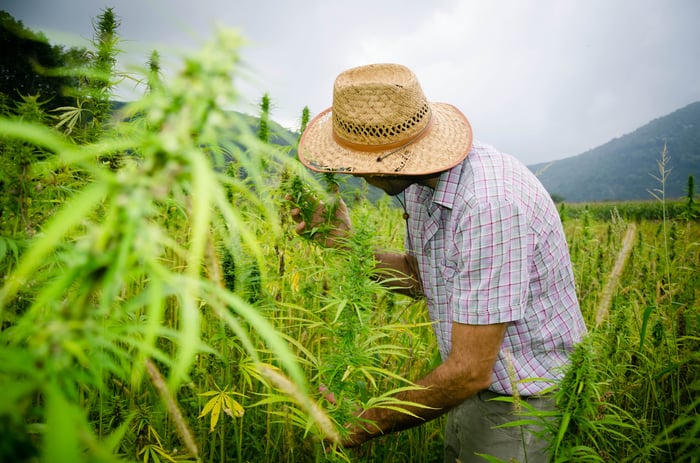 Canadian cannabis companies have been struggling to achieve profitability. Revenue growth hasn't been sufficient to translate to the bottom line. However, HEXO managed to achieve its goal of positive EBITDA in its second quarter (ended Jan. 31), which rang in at 202,000 Canadian dollars from a loss of CA$419,000 in the year-ago quarter. A revenue jump of 94% year over year to CA$32.8 million contributed to this growth. The company was finally successful in achieving positive EBITDA after "seven straight quarters of adjusted EBITDA improvements," according to the management.

Positive EBITDA also reveals how well a company is handling its operating expenses; for HEXO, that's evident in the whopping 91% dip in total operating expenses, to CA$25.5 million, that cleared the way for the good results.

What is HEXO doing differently in 2021?

Needless to say, businesses cannot keep doing the same thing and expect different results. Much of Canada's cannabis sales are dependent on the opening of more legal stores in the country, which tied down Canadian marijuana companies' revenue growth last year. But regulatory challenges are now easing, which will allow more stores to open this year.

We're already seeing some of that take place. As of April 20, the province of Ontario has 613 open legal cannabis stores, while Alberta has 599. That's up significantly from June of last year, when Ontario had less than 100 open stores and Alberta had 483. HEXO can take advantage of this to strengthen its position in the Canadian market.

HEXO is also targeting the international market to keep sales coming. On Feb. 16, it announced an agreement to acquire Zenabis Global for an all-share transaction of about $235 million. This partnership will not only strengthen HEXO's position in the Canadian market but will also open doors to the European medical cannabis market, where Zenabis is a player. HEXO will gain access to Zenabis' licensed cultivation capacity of 111,200 kg of high-quality cannabis annually.

Should you trust this pot stock again?

HEXO had a remarkable 2020, and management seems to be trying their best to regain market position this year -- with some tremendous initial success. In terms of sales, HEXO maintained its No. 1 position in Quebec; it's No. 3 in Alberta and is in the top four in Ontario, according to the management.

HEXO's cannabis-infused beverages segment grew 11% sequentially in the quarter, impressive for an entirely new division. The global marijuana beverage market could grow at a compound annual rate of 18% to be worth $2.8 billion by 2025, according to Grand View Research. Derivatives (vapes, edibles, beverages, and concentrates) were legalized in Canada in October 2019, and HEXO has also launched its cannabidiol, or CBD, infused beverages in the U.S. with its partner Molson Coors under the Truss USA joint venture. This partnership gives HEXO exposure to the U.S. cannabis market.

Hexo's CEO Sebastien St-Louis also discussed in the Q2 2021 earnings call that the company managed to remain the No. 1 performer in the beverages segment with a 43% market share in Canada. Management expects similar success in Colorado, as well, and then will focus on expanding in other legal states. Over the next few years, management believes only a handful of companies will be able to successfully capture a chunk of the global cannabis market, and HEXO is aiming to be one of them.

HEXO will have to focus on growing its domestic medical cannabis sales along with targeting the recreational segment if it wants to achieve its goal. Its domestic medical cannabis net revenue declined from CA$695,000 in Q2 2020 to CA$422,000 in Q2 2021. Luckily, the increase in legal stores in Canada should help that trend reverse. And beverage sales do look promising; HEXO could offer tough competition to Canopy Growth, which also boasts of soon becoming a market leader in the beverage category in Canada. Aphria has also made an entry into the segment with its acquisition of SweetWater Brewing Company, but it could be a while before the company starts to launch products. Over the past 12 months, HEXO's shares have surged 204%, outperforming the industry benchmark Horizons Marijuana Life Sciences ETF's gain of 97%. 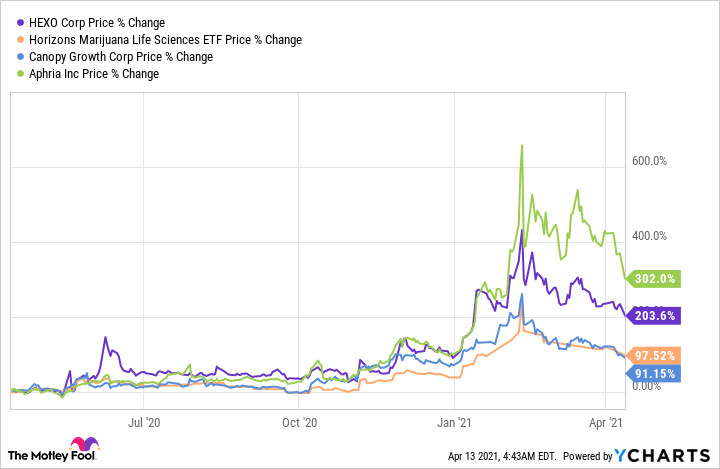 With revenue growth, positive EBITDA, carefully planned acquisitions and partnerships, innovative products, and a good hold in the Canadian market, the path is clear for HEXO. It appears 2021 could be a fruitful year for the company. This cannabis stock looks like a promising buy and hold to earn some long-term returns.