Please ensure Javascript is enabled for purposes of website accessibility
Log In Help Join The Motley Fool
Free Article Join Over 1 Million Premium Members And Get More In-Depth Stock Guidance and Research
By Brett Schafer - Apr 30, 2021 at 9:26AM

The company has a lot of momentum at the moment, but is trading at a steep valuation.

Match Group (MTCH -5.81%) is a holding company that owns dozens of dating apps, including Tinder, Hinge, OkCupid, and Match.com. The stock has performed quite well over the past year despite potential headwinds from lockdowns/quarantines and is up over 50% since its full spin-off from Interactive Corp. (IAC -4.35%) in July of 2020.

On Tuesday, May 4, Match Group will release its fiscal 2021 first-quarter earnings. Is now the time to buy the stock, before the results are announced? Let's take a look. 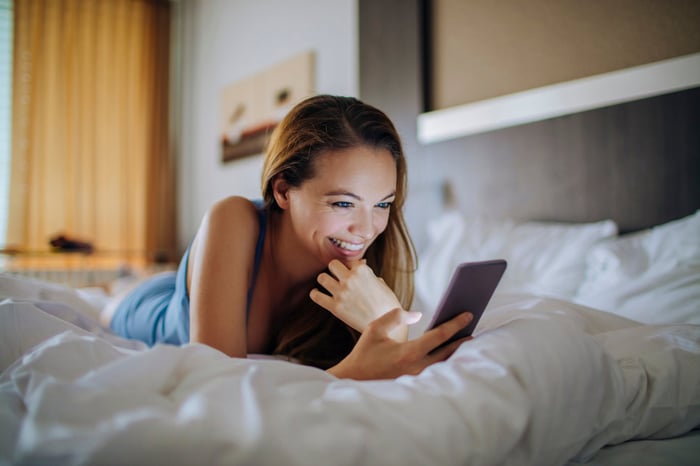 Match Group has consistently grown its revenue and profits over the last five years. The majority of this growth has been driven by Tinder. In 2020, Tinder generated $1.4 billion in sales, up 18% year over year, making up over 50% of the company's consolidated revenue. Tinder has helped Match Group more than double its top-line sales since 2016 and shows no signs of slowing down anytime soon.

At the end of 2020, Match Group had 10.9 million paying subscribers, which were up 12% from the year prior. While a lot of this subscriber growth is coming from Tinder, as of late, more and more subscribers are coming from the company's other apps like Hinge.

The company doesn't break out subscriber count for Hinge, but it did announce that revenue was up threefold and downloads were up 63% for the app in 2020. Investors should expect this growth to continue for years as Hinge tries to become a national dating brand. It will also help Match Group not rely on the success of one app (Tinder) to drive its financial growth.

Lastly, investors should look for updates regarding Match Group's acquisition of Hyperconnect, a South Korean social connections and video chatting app. The purchase price was $1.725 billion, which is a fairly sizable acquisition for Match Group, so it is important that it has a successful integration. Hyperconnect had over $200 million in 2020 revenue, was growing 50%, and is already profitable.

If Hyperconnect continues this strong financial growth under the Match Group umbrella, investors should be happy about the $1.725 billion purchase price. Plus, it gives Match Group access to the South Korean market, where the company has historically struggled to grow.

Overall, there's nothing to complain about with Match Group's business. But with any stock, it is not just about how good the business is or how fast it is growing, but the price you are paying for that business.

At a market cap of $41.3 billion, Match Group trades at a price-to-sales ratio (P/S) of 17.2, and with $746 million in 2020 operating profit, it trades north of 55 times its trailing 12-month operating income. Both these valuation metrics are high relative to the broader market. Match Group also has a sizable debt load of $3.5 billion, which at current profit levels could take a few years to pay off. However, the majority of Match Group's debt is not due until after 2025, so as long as it continues to grow its profits, it should have no problem paying back its loans.

Match Group's valuation is high, but investors might just be optimistic about the underlying unit economics of these dating apps. In 2020, Match Group's consolidated operating margin was above 30%, which on its own is quite impressive. But once you figure in the high fees Match Group is required to pay the app stores run by Apple and Alphabet's Google, those profit numbers get even more impressive.

In fact, at the latest big tech antitrust meeting, Match Group's general counsel estimated that the company was on track to pay $500 million a year in app store fees, which is around 20% of the company's total 2020 revenue. If governments around the world forced Apple and Google to reduce their app store fees, that would be a huge benefit to Match Group's bottom line.

On its face, with such a premium valuation, Match Group does not look like a screaming bargain heading into earnings. However, if you believe this company can continue to grow its income at a double-digit percentage rate over the long term, this high valuation will come down shortly.

There could be some short-term volatility, as is typically the case with high-growth stocks, but if you believe in the long-term trajectory of online dating, now is as good a time as ever to buy some shares in the market leader, Match Group.

Are Match Group's Best Days Behind It?