Please ensure Javascript is enabled for purposes of website accessibility
Log In Help Join The Motley Fool
Free Article Join Over 1 Million Premium Members And Get More In-Depth Stock Guidance and Research
By Billy Duberstein - Apr 30, 2021 at 8:00AM

The real estate technology platform is backing up its aggressive projections.

There are a lot of brand-new SPACs to sort through after the SPAC boom we just saw over the past six months. 2020 saw 248 SPACs, nearly a fivefold increase over 2019. Meanwhile, 2021 has already exceeded the 2020 SPAC count, and we're only four months in!

That leaves a lot of options, so some investors may have missed the recent April 27 first-quarter update from one of my favorite new SPACs, TS Innovation Acquisitions (TSIA), which will soon purchase real estate technology firm Latch.

It looks as though Latch, whose smart locks, thermostats, delivery management tools, and other software modules aim to modernize apartment buildings, is delivering on the promises outlined in its initial SPAC presentation. That sets investors up for big potential returns over the next decade. 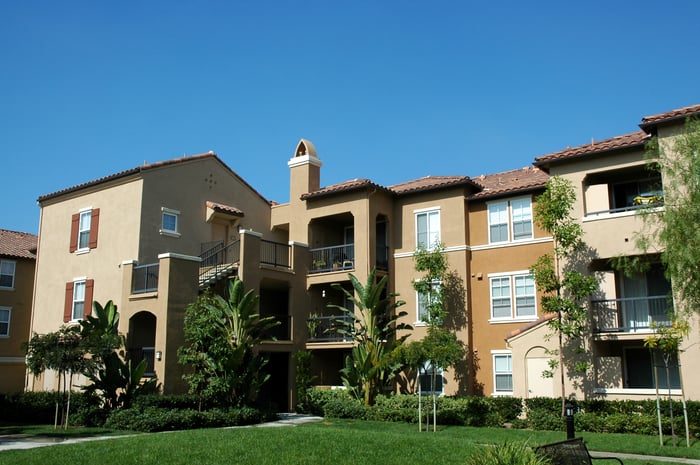 To be sure, the pandemic greatly affected Latch. A lot of new apartment construction was delayed in 2020, and although Latch makes its products available for retrofits on existing buildings, the uncertainty likely held back renovations and extra capital expenditures from landlords last year.

However, as the pandemic is beginning to ease, Latch's prospects are accelerating once again. While bookings growth came in at "only" 49% last year -- impressive for a normal company, but below the 65% average Latch expects over the next five years -- bookings have reaccelerated in the first quarter to 86% to 88%. Although revenue is fairly tiny as of now, since bookings usually incorporate upfront six-year payments, revenue is expected to accelerate 135% to 140% in Q1 versus just 21% growth last year.

That bookings growth is slightly ahead of the 84% growth forecast for 2021 in the company's five-year projections. Many critics have slammed SPACs in general since companies are allowed to provide five-year projections in their investor presentations, which traditional IPOs are not allowed to do. Some believe that opens the door to companies raising money off assumptions that prove unrealistic or unfeasible. Therefore, it was great to see Latch hitting its booking metrics in its first quarterly update since the merger announcement.

If the company can hit its projections of 65% average annual bookings growth over the next five years, while turning free cash flow positive by 2023, this would appear to be a very cheap stock.

Another positive development for Latch: customers like more than just the base smart lock product. In the first quarter, 75% to 80% of booked customers purchased more than one Latch module. That's up from just 44% in the fourth quarter of 2020.

More products per customer would make each sale much more profitable for Latch, increasing its lifetime value-to-acquisition cost metrics and returns on investment. Management also said it has a robust product roadmap in 2021, so the current product adoption trends on the part of existing customers are a great sign. Based on its current roadmap, Latch believes it can increase the average revenue per unit by 150% should customers continue to adopt new products, including those in the pipeline that haven't even been released yet.

New products and innovation should lead to continued growth

Latch management also loves to highlight how focused it is on research and development for investors as the company's technology spans hardware, firmware, and software in an integrated offering. Over 50% of employees are engineers, with 43% of operating expenses going to R&D (up from 39% in 2019). The company also has 90 patents issued or pending.

Latch's product portfolio continues to expand, with two new products unveiled in Q1, including its C2 smart lock for easier retrofits, as well as a new NFC (near field-communication) unlock function on Android.

A SPAC to watch

I've been a TSIA/Latch shareholder since just after the merger announcement, yet shares are down about 30% since then due to the sell-off in many high-growth tech names as the economy continues to reopen. Yet this first quarter update just reaffirmed my positive outlook on the company's potential.

With the merger scheduled to happen this quarter, the recent sell-off could be a great opportunity for long-term-oriented growth investors.

My Top Tech IPO to Buy in May