Please ensure Javascript is enabled for purposes of website accessibility
Log In Help Join The Motley Fool
Free Article Join Over 1 Million Premium Members And Get More In-Depth Stock Guidance and Research
By Leo Sun - Apr 30, 2021 at 8:50AM

Energous is trading at nearly half its IPO price for obvious reasons.

Seven years ago, Energous (WATT -3.76%) went public and gained a lot of attention with its ambitious wireless charging plans. It claimed to be developing futuristic wireless charging pads that could charge a wide range of devices from up to 15 feet away.

Energous hadn't launched any products or generated any revenue at the time of its IPO, but the hype catapulted the stock from its initial price of $6 to nearly $15 within the first few days.

Energous eventually hit an all-time high north of $23 per share in late 2017, but subsequently collapsed and trades at about $3 per share today. Let's look back to see how a series of exaggerated deals lifted the stock to unsustainable levels, how that house of cards collapsed, and why it's still a risky stock.

Lots of speculation and plenty of disappointments

In 2016, the FCC approved a lower-powered version of Energous' WattUp charging technology for Internet of Things (IoT) devices. This was a far cry from the 15-feet charging range for household electronics which the company had teased, but it attracted more bulls back to the stock.

In 2017, it partnered with Apple's (AAPL 1.62%) supplier Dialog Semiconductor (DLG) to produce a new wireless charging chip. Analysts speculated the chip could be installed in Apple's iPhones with Dialog's power management chips, and the rumors lifted Energous' stock to all-time highs.

Yet Apple actually chose Broadcom's (AVGO -1.64%) wireless chip, which used the Qi charging standard from Renesas' (RNECY -2.22%) IDT, instead of Energous' technology. Apple also replaced Dialog's power management chips with its first-party chips. Later that year, the FCC approved Powercast's wireless charging technology, which could remotely charge devices from up to 80 feet away.

Lots of partnerships and approvals, but no real revenue

That double whammy of bad news seemed to signal the end for Energous, but it clawed its way back with a series of partnerships and product announcements.

In 2018, it partnered with IDT -- a small Chinese company that shouldn't be confused with Renesas' competing subsidiary -- to produce wireless charging chips for gaming controllers. This partnership likely misled some investors to believe Energous had partnered with one of its biggest rivals.

It also announced the FCC approval of its first commercial product, a WattUp-powered personal sound amplification device (PSAP) manufactured by Delight. It also announced another PSAP partnership with a company called NewSound, and it introduced several similar devices at CES that year.

Over the past two years, it partnered with ZPower to create rechargeable micro-batteries, but that company went bankrupt during the pandemic last year. Yet Energous still partnered with additional companies to integrate its technology into tracking tags, e-ink tags, and smartglasses; launched new wireless charging chips; and partnered with the Chinese EV battery maker Grepow.

But despite all those partnerships and approvals, Energous still isn't generating nearly enough revenue to support its current valuation.

Energous ended the year with $50.7 million in cash and equivalents and no debt, but it's keeping itself afloat with secondary offerings, which have boosted its number of outstanding shares over the past five years. 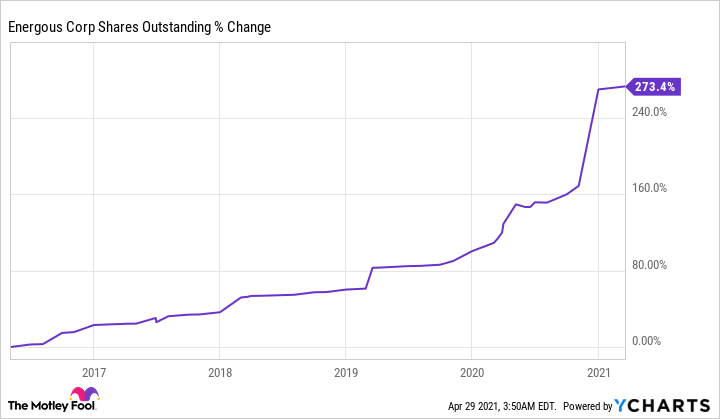 Only two analysts currently cover Energous, and they believe its revenue could rise nearly ninefold to $2.85 million this year. But we should be deeply skeptical of that forecast, for three reasons.

First, Energous has only beat analysts' quarterly revenue expectations once in the past two years, so that spotty track record doesn't inspire much confidence. Second, most of Energous' partners are tiny companies that don't publicly disclose their finances -- which makes it difficult to gauge the impact of its recent deals.

Lastly, Energous still faces intense competition from bigger companies like Broadcom and Renesas, and it could struggle to beat IDT's Qi standard for close-range charging and the Powercast standard for long-range charging. Even if Energous somehow hits analysts' targets this year, it would still be trading at nearly 70 times this year's sales.

Energous has been around for years, but it still barely generates any revenue and it's constantly diluting its own stock to stay solvent. If its wireless charging technology really had any disruptive potential, we would probably see more than two analysts cover this stock and see institutional buyers gobbling up its penny stock at a steep discount to its IPO price. But that won't happen anytime soon, and the stock will continue to trade on hype and promises instead of any real financial growth.

Why Did Energous Stock Drop 8% Today?