Please ensure Javascript is enabled for purposes of website accessibility
Log In Help Join The Motley Fool
Free Article Join Over 1 Million Premium Members And Get More In-Depth Stock Guidance and Research
By Anirudh Shankar - May 1, 2021 at 6:50AM

Which company should you consider buying right now?

AbbVie (ABBV 0.42%) and Merck (MRK 1.37%) currently boast the No. 1 and No. 2 best-selling drugs on the market. AbbVie's Humira, which is used to treat Crohn's disease, just grossed $20 billion in sales in 2020, while Merck's No. 2, Keytruda, did $14.38 billion in sales. With patent cliffs looming for both drugs in the next several years, which company is the better buy? 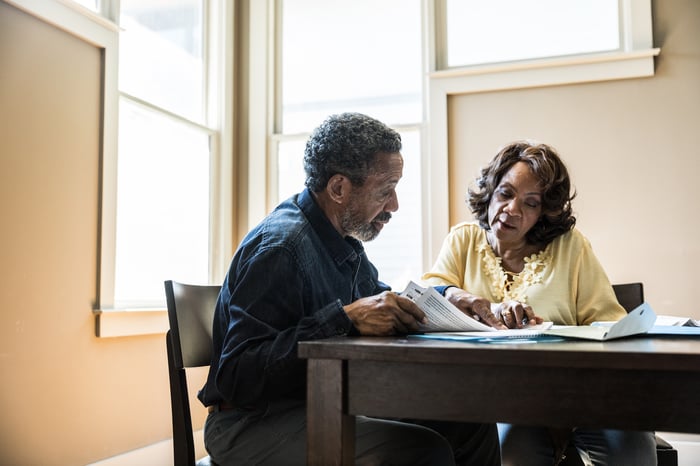 In 2013, AbbVie was spun off by its parent company, Abbott Labs, in a decision to separate two fundamentally different businesses. AbbVie's darling drug, Humira, which was launched back in 2003, would go on to dominate the sales of prescription drugs to the present day. But there have been growing fears from investors over the last few years relating to AbbVie's dependence on Humira as a huge share of its revenue.

However, there is cause for optimism. In 2019, AbbVie acquired Allergan for $63 billion in one of the biggest deals in the industry next to Bristol Myers Squibb's acquisition of Celgene for $74 billion and Takeda Pharmaceuticals' acquisition of Shire for $62 billion. AbbVie's move diversified its revenue with new consumer products like Botox, which brought in $1.3 billion for the company in 2020. AbbVie has also launched Skyrizi (a drug to treat plaque psoriasis) and Rinvoq (rheumatoid arthritis), which reaped a combined $2.3 billion just 12 months after they launched. The business segments acquired from Allergan also brought in $8.93 billion in revenue, which represented almost 20% of AbbVie's net revenue for 2020.

AbbVie just released earnings for Q1 2021. Net revenue for the quarter increased 50% year over year to $13.01 billion, compared to analysts' estimate of $12.78 billion. We also saw the company's aesthetics portfolio revenue increase 35% to $1.14 billion, this was fueled by the near 50% surge in global botox cosmetic net revenues in the quarter compared to last year.

We were really able to see AbbVie's diversification, as the strength in the company's aesthetics business helped offset the mounting pressure on its flagship drug Humira. The immunologic saw an over 8% slide in revenue internationally, due to competition from other drugs, including Biogen's Imraldi in Europe.

Humira's looming patent expiration in 2023 has left investors cautious about whether to initiate big positions in the company. Some might consider these fears overblown, as AbbVie has been using this time to bring these new drugs to market and build a patent wall around its other blockbuster drug, Imbruvica. The company has filed for around 165 patents and so far has had 88 approved. All these patents have given AbbVie another nine years of patent protection for a total of 29 years of commercial sales without any competition. Currently, Imbruvica generates almost $5.3 billion a year for the company, and these patent protections will no doubt allow for many billions more.

Even with all the bad news priced in, I believe the company is undervalued. AbbVie's current forward price-to-earnings (P/E) ratio of about 9 is below its high of 10.4 in the fourth quarter of 2020. The stock looks attractive at these levels. With an almost 5% dividend yield, with a possible margin of safety, it could hit more than $128 if it simply reverted to its usual market valuation.

Merck, meanwhile, commands the second-biggest drug by sales on the market: Keytruda. Keytruda is an immunology drug that fights many different types of cancer, has been a key driver for Merck's business growth over the last few years.

Many predict that by 2023, Keytruda will hold the No. 1 place in drugs sold by revenue. This is mostly due to the speculation about AbbVie's Humira losing patent exclusivity and therefore not selling as much when generics come into the picture. However, for Merck, that problem will not arise until well into the future, because Keytruda is not expected to lose patent exclusivity until 2028.

Merck also reported earnings this week, which included sales of Keytruda. We saw strong sales of the cancer-fighting drug help fuel its first-quarter earnings. Sales of the drug for the quarter jumped 19% year over year to $3.9 billion. Merck is so far on track to possibly do nearly $16 billion in sales for 2021, a 11% increase from 2020. By 2026, long-term analysts expect Keytruda to do $24.32 billion annually in sales. This is also a significant increase from what sales-leader Humira did in 2020, at just $19.83 billion. By 2026, Humira will be off-patent for a few years, and this will give Keytruda the room to dominate the majority of sales in the cancer-treatment space. There is always a factor of concentration risk to have most sales in just one drug, but Merck is also making strides in diversifying its revenue streams.

Along with Keytruda, there are a lot of products in Merck's pipeline to be very optimistic about. Sales of Bridion (an anesthetic), which is one of Merck's newer drugs, grew by 6% to $1.2 billion. We also saw Merck's Animal Health unit grow sales by 7% to $4.7 billion in 2020.

Merck also currently trades at a very cheap valuation compared to where it has normally traded over the past few years. Shares just last year traded at a future P/E of 13.5, and the current future price-to-earnings ratio sits at just under 11.3. We are looking at around a $80 share price and an 8% upside if the stock reverts to its usual market valuation.

Both these pharmaceutical giants are wonderful companies, and both will no doubt deliver great shareholder returns in the long run. However, when it comes to safety and reliability in investment over the next few years, I might have to go with Merck.

When comparing pharmaceutical companies, drug patent cliff risks must be taken into account. In this case, AbbVie's biggest drug, Humira, faces imminent risk from loss of exclusivity. Though I laid out how AbbVie has been diversifying to mitigate a huge loss in revenue, the impending loss exclusivity on its biggest drug is still large enough to cause me to turn to Merck as a buy today. Simply put, Merck is expecting more annual sales from Keytruda than Humira ever earned, and that should fuel a run in share price and future dividend increases.

Merck currently offers a 3.53% dividend yield, a bit below AbbVie's 5%. But looking at the comparison from a valuation perspective, I believe the opportunity in further share price upside for Merck is much greater than that for AbbVie. It has an opportunity to expand earnings at a much faster rate over the next 5 to 10 years, with Keytruda emerging in the spotlight.