Please ensure Javascript is enabled for purposes of website accessibility
Log In Help Join The Motley Fool
Free Article Join Over 1 Million Premium Members And Get More In-Depth Stock Guidance and Research
By Rich Duprey - May 1, 2021 at 10:14AM

Its portfolio of name-brand tools is building on a legacy of success.

Stanley Black & Decker (SWK 2.32%) makes some of the best-known brands in hand and power tools, and together, they just hammered home a record-setting first-quarter performance.

The earnings results built on the strong effort it recorded in the fourth quarter of 2020. Management also updated its full-year guidance as the company enjoyed exceptional organic growth across the board at the same time it was able to raise prices.

Yet as momentum builds in its favor, should investors consider buying shares of this iconic brand? Let's drill down further to find out. 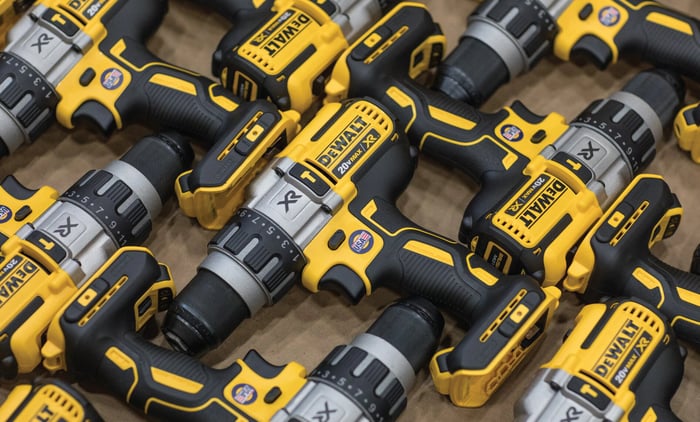 First-quarter sales jumped 34% year over year to $4.2 billion on a 48% gain in the tools and storage segment, Stanley's biggest division by far, as all regions surged in a post-pandemic boom. North America and Europe were up over 40% each, while emerging markets soared 67%, leading the segment profit rate to rise to 21.4%, a 990 basis-point expansion from the prior-year period.

Greater construction activity certainly helped lead the way, but consumers also took up their hammers and saws again too as "secular shifts related to the consumer reconnection with the home and garden" lifted Stanley's business higher.

Similarly, the security division witnessed 2% sales growth in the quarter, but it has an order backlog that it will be able tap into sitting at record highs, which positions the tool company to see accelerating growth for the remainder of 2021.

The performance enabled Stanley Black & Decker to raise its full-year 2021 outlook. Management now expects adjusted earnings to fall between $10.70 and $11.00 per share, up from its previous guidance of $9.70 to $10.30 per share. At the midpoint of the new range, earnings will be 20% higher than last year's results. The company also believes its free cash flow production will match its net income.

It's able to make those forecasts because of vigorous organic growth, as well as having the ability to incrementally raise prices.

That will be offset somewhat by increases in commodity costs. As anyone who's walked into a big-box store can attest, inflation has hit all segments of the market. There is a good reason why the cost of a simple sheet of plywood has become an internet meme.

Yet with analysts forecasting 10% annual earnings growth for the next five years, the hand and power tool company is giving itself a robust head start.

What price for success?

The market, though, barely reacted to Stanley's record sales and earnings performance with shares essentially flat following the first-quarter report. That should have investors asking whether this is a good entry point.

Stanley stock is up 16% year to date, beating the S&P 500's 11% gain, and over the last 12 months, shares have climbed 88% versus a 45% rise for the index. It also trades at a premium to both its historical valuation and its peers, though having acquired many of the biggest name brands over the years -- Black & Decker, DeWalt, Porter-Cable, Irwin, and Craftsman -- Stanley has bought itself a leading position atop the market and arguably deserves its valuation premium.

Even so, while its price-to-earnings ratio may be elevated, it trades at a discount to its five-year average return on invested capital and its return on equity. Coming into a secular period of strong organic growth after having shed underperforming and noncore businesses, its current price point remains attractive. 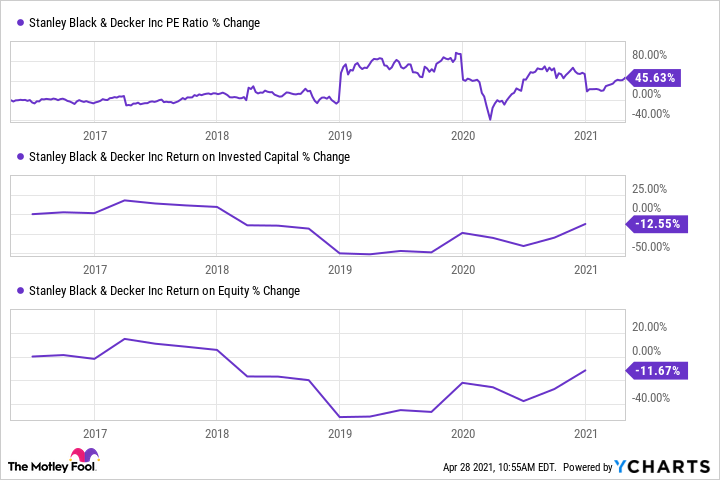 Worth it in the end

Stanley's dividend is a bit pedestrian as it yields just 1.4% annually, but it's been a rock-solid payer. The tool specialist has made a payment to investors for 145 years and has increased the payout for 53 consecutive years.

That makes it part of the rarified group of companies known as Dividend Kings, which are companies that have raised their dividends for five decades or more. Having built a solid financial foundation and expecting strong growth to continue for the foreseeable future, Stanley Black & Decker ought to be considered a must-own stock.