Please ensure Javascript is enabled for purposes of website accessibility
Log In Help Join The Motley Fool
Free Article Join Over 1 Million Premium Members And Get More In-Depth Stock Guidance and Research
By Joe Springer - May 1, 2021 at 5:12AM

Whether Bridgetown invests in Traveloka or not, this entry point looks like a gift.

The market in 2021 has somehow been nuttier than it was in 2020. Reddit stocks, innovation stocks, cryptocurrencies, and special purpose acquisition companies (SPACs) seemed to rip to new highs on a daily basis. But now what? Is it all over? Too late to join the party?

For those that have 2021 FOMO (or, the fear of missing out), I think there is a SPAC that is a brilliant investment, and is trading for its original price when it should trade for a premium. That SPAC is Bridgetown Holdings Limited (BTWN 0.00%). 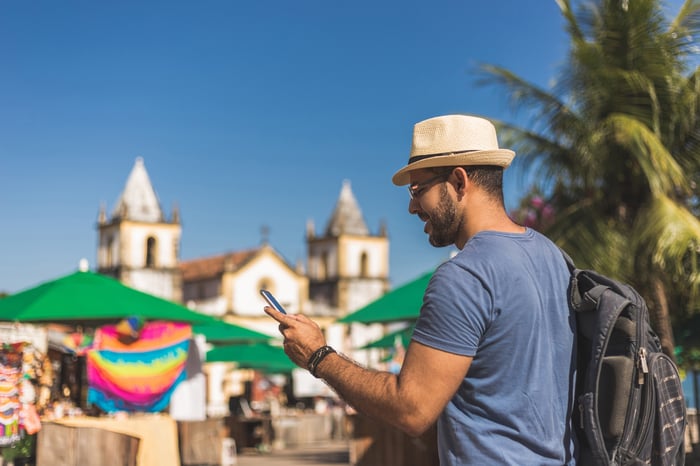 Bet on the jockey

SPACs are something of a "blank check" arrangement wherein funds are entrusted to a team, which invests the money in a private company and brings it public. It is the ultimate bet-on-the-jockey-not-the-horse play. And there is no time for horseplay with this SPAC, because one of the jockeys is none other than Peter Thiel.

Billionaire investor Peter Thiel is one of the most successful venture capitalists ever. His companies are some of the most well-known growth performers on the market. Thiel's track record includes these highlights:

Given his past successes, it is pretty incredible that his SPAC is trading right around its original valuation. Nobody wants to bet on Peter Thiel? Bridgetown had surged to an intraday price of over $25 per share during the SPAC excitement, but now it is all the way back to the $10 range where it started.

The right time to buy the travel industry?

Bridgetown is rumored to be negotiating with Indonesian online travel company Traveloka. The company is already Southeast Asia's largest online travel start-up, but has been hammered by COVID along with the rest of the travel industry. So the funding could be happening at a favorable time for both Bridgetown and Traveloka, which is already backed by the likes of Expedia and JD.com.

Peter Thiel probably likes Traveloka because it is founder-led. Thiel has talked and written extensively (read his book Zero to One for more) about the importance of founders leading companies. Founder-led companies can innovate without fear of being ousted for not going with the established conventions and seeking consensus.

Traveloka is led by founder Ferry Unardi. He has recently expanded services beyond airline ticketing and hotel booking to attraction tickets, lifestyle activities, car rental, and restaurant vouchers. Now, he is moving the company into financial services in Southeast Asia.

In March, Traveloka announced its joint venture with Siam Commercial Bank (SCB 10X) to roll out "Buy Now Pay Later" and other financial services in Thailand. Through the venture, Traveloka gains access to SCB 10X's 16-million-strong customer base. If Mr. Unardi can move about the fintech space in Thailand and other Southeast Asian countries in the right way, the upside for Traveloka is enormous. Right now, only 30% of Traveloka's Thai customer base and 6% of Indonesia's entire population (of 270 million) own a credit card.

A good buy either way

Whether Bridgetown invests in Traveloka or not, I love the idea of investing with Peter Thiel from the ground floor. Just as investors did so well for so long trusting Warren Buffett to invest in the right companies, I trust Mr. Thiel to invest my venture capital along with his own. The investments he is looking at are private, and otherwise not accessible to most investors. These elements combined create a unique opportunity.

I think the lack of a premium to the original price -- and a 40% discount from the highs -- is a gift that investors should snatch up before the market comes to its senses. If you missed the SPAC boom, Peter Thiel and Bridgetown are clearly giving you a second chance.