Please ensure Javascript is enabled for purposes of website accessibility
Log In Help Join The Motley Fool
Free Article Join Over 1 Million Premium Members And Get More In-Depth Stock Guidance and Research
By Keith Speights - May 2, 2021 at 6:03AM

Here's why they could be attractive to most income-seeking investors.

Warren Buffett loves dividends. That's true even though his own Berkshire Hathaway (BRK.A 0.07%) (BRK.B -0.01%) has never initiated a dividend program.

Some of the stocks Berkshire owns don't offer dividends, but many of them do. And a handful of them pay juicy yields that would be attractive to any income investor. Here are Buffett's three highest-yielding dividend stocks. 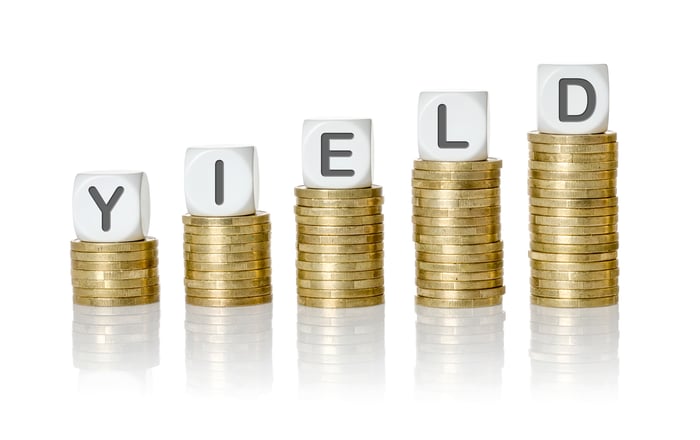 Chevron (CVX -1.32%) ranks at the top of the list with a dividend yield of over 4.8%. The oil and gas giant is also a Dividend Aristocrat with 34 consecutive years of dividend increases.

Buffett has become increasingly enamored with the energy sector. Berkshire added 48 million Chevron shares to its existing position in the fourth quarter of 2020. Chevron is now the conglomerate's 10th largest holding.

Why does Chevron stand out in Buffett's view? Probably in part because the company's balance sheet is in better shape than most of its peers. Chevron is also in a position to grow with its acquisition of Noble Energy, a move that boosted its proven oil reserves by 1.7 billion barrels.

Sure, fossil fuels will almost certainly be increasingly replaced by renewable energy sources over the long run. For now, though, the world's economy still relies on them. Chevron appears to be in a good position to keep its dividends coming.

AbbVie (ABBV -0.91%) is another Dividend Aristocrat in Buffett's Berkshire holdings. The big drugmaker is only one dividend hike away from joining the even more exclusive club of Dividend Kings -- S&P 500 members with at least 50 years of consecutive dividend increases. AbbVie's dividend yield currently stands at nearly 4.7%.

While Buffett likes dividends, he also likes bargains. AbbVie certainly appears to be a bargain right now with its shares trading at only nine times expected earnings. There's one fly in the ointment, though: The company's best-selling drug Humira loses U.S. patent exclusivity in 2023. That will definitely weigh on AbbVie's top and bottom lines.

Buffett doesn't seem to be concerned about Humira, considering that Berkshire added to its stake in AbbVie during the fourth quarter of 2020. Was that a foolhardy move? Probably not. Although AbbVie does expect declining sales for Humira will cause its overall revenue to fall in 2023, the company projects a return to growth the following year.

AbbVie's bullish outlook is based on the prospects for several other drugs in its lineup. In particular, the company is counting on tremendous sales growth for autoimmune disease drugs Rinvoq and Skyrizi and antipsychotic drug Vraylar.

Verizon Communications (VZ 0.17%) isn't dividend royalty just yet. However, the telecommunications leader has increased its dividend every year since 2007. Its dividend yield of nearly 4.5% is also very attractive.

Like AbbVie, Verizon is cheap relative to many of its S&P 500 peers. The stock trades at only a little over 11 times expected earnings with a similar price-to-free-cash-flow multiple.

Verizon does carry a sizable amount of debt on its balance sheet. It ended the first quarter with total debt of $137.4 billion. However, its net leverage ratio is improving.

The company should have a solid growth opportunity as the adoption of high-speed 5G wireless networks increases. Verizon could even dethrone T-Mobile US as the 5G leader in the U.S. Don't expect the stock to deliver jaw-dropping gains. However, Verizon's great dividend combined with its 5G opportunity makes this high-yielding Warren Buffett stock one that most income investors will probably like.