Please ensure Javascript is enabled for purposes of website accessibility
Log In Help Join The Motley Fool
Free Article Join Over 1 Million Premium Members And Get More In-Depth Stock Guidance and Research
By Rich Duprey - May 3, 2021 at 1:53PM

Supermarket can deliver groceries to a smartphone's location as well as a street address.

Kroger (KR 1.71%) is the latest supermarket chain testing drone delivery of groceries. The largest pure-play grocery store said it was partnering with Telegrid Technologies' Drone Express to launch a pilot program at a Kroger Marketplace in Ohio with a second test to begin later this year at one of its Ralphs supermarkets in California. 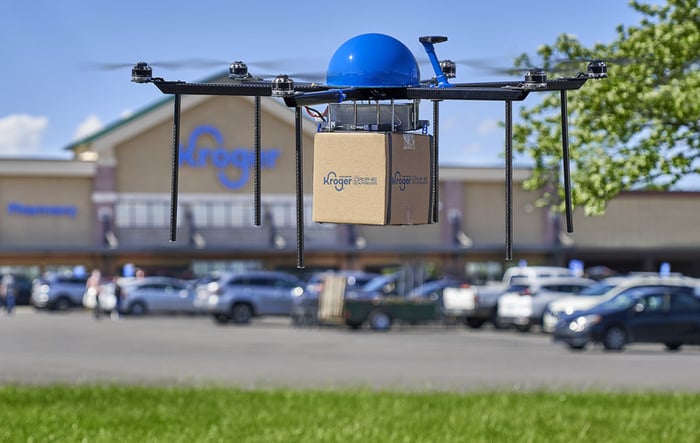 Of course, Amazon.com (AMZN 3.15%) has been experimenting with drones since 2013 and was granted Federal Aviation Administration certification for its Prime Air drones in August.

Kroger says its drone test with Telegrid will enable delivery not just to a street address but also to a smartphone location. It will enable customers to place an order and have it delivered within 15 minutes.

However, unless an entire fleet of drones is making the delivery, industry usage of the service seems limited to just fill-in runs, as Kroger notes the drone's weight capacity is about 5 pounds. With a gallon of milk alone weighing over 8 pounds, how much can actually be delivered at one time seems negligible.

To address that, Kroger is compiling special packages that can be ordered, such as a baby-care bundle featuring wipes and formula, and a child-wellness bundle with over-the-counter medications and fluids. With summer coming, Kroger will also have a S'mores bundle with graham crackers, marshmallows, and chocolate.

The test flights will begin this week and will be piloted by licensed Drone Express pilots from an on-site trailer with additional off-site monitoring. Actual deliveries will begin later this spring.