Please ensure Javascript is enabled for purposes of website accessibility
Log In Help Join The Motley Fool
Free Article Join Over 1 Million Premium Members And Get More In-Depth Stock Guidance and Research
By Patrick Bafuma - May 4, 2021 at 7:45AM

Despite record revenue for its latest quarter, the medical device maker's shares sank 8% following its earnings release. But its next stage of growth is coming.

Abiomed (ABMD 2.98%) reported its fiscal 2021 fourth-quarter earnings last week, with 17% year-over-year revenue growth of $243 million for the quarter. For many mature medical device companies, this would be a fantastic result. Unfortunately, for the full fiscal year, revenue only rose 1% to $848 million. This is apparently why the market punished the maker of implantable cardiac pumps after the announcement.

However, as was frequently mentioned in the earnings call for the period, which ended March 31, the next stage of the company's life cycle, dubbed Abiomed 2.0, is here, and the company looks set to reward investors over the long term. 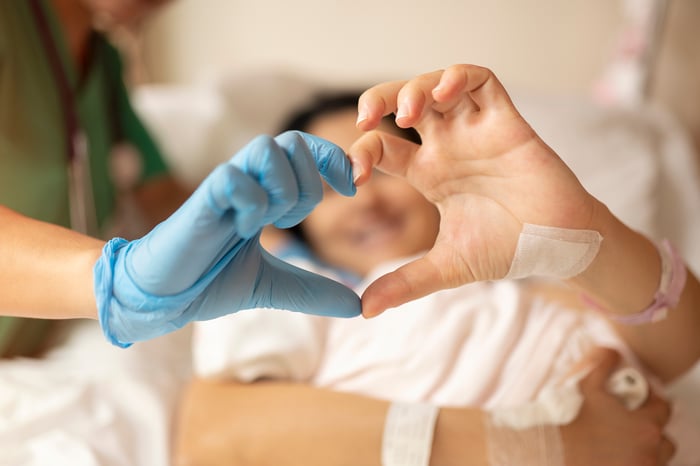 Abiomed 2.0 starts with cloud-connected and cloud-monitored versions of its popular Impella implantable cardiac pumps. Less than a year after the introduction of the data-streaming option, 70% of Impella patients are being monitored in the cloud via Impella Connect. Right now, the company has just a 10% share of its addressable market in the U.S., but it's hoping that 24/7 support backed up by artificial intelligence systems that track and optimize patient care will propel that percentage higher.

Currently, the Impella manufacturer reports about 400,000 potential patients across multiple indications. That number could come close to doubling in the future. Just a few weeks ago, Abiomed enrolled the first patient in its Protect IV clinical trial, which is evaluating the utility of Impella in high-risk patients undergoing interventions for coronary artery disease (i.e., cardiac stents or open-heart surgery).If the results of the study are positive, a label expansion could add another 319,000 patients to the Impella's addressable market. The study may be completed as early as March 2024, per clinicaltrials.gov, but Abiomed management did not offer any specifics regarding the timeline when questioned about it during the earnings call.

Another potential driver of growth for Abiomed 2.0 is the Breethe OXY-1 System, which began its rollout in late 2020. This external system essentially functions as a spare set of heart and lungs for a short period of time via a process called extracorporeal membrane oxygenation (ECMO). This is a resource-intensive process, and not every hospital can perform it. There are approximately 236 ECMO-capable centers in the U.S. Abiomed only has five sites utilizing its ECMO system at this point, and it has only been used on 20 patients thus far, management said during the conference call. While the plan is for a controlled rollout, savvy investors should keep an eye on Abiomed to see how rapidly the number of sites using Breethe grows, as well as how many patients are treated using it. More patients treated means increased sales of the consumable accessories the system requires.

With all that in mind, though, management did say during the conference call that Breethe would probably be "more of a fiscal-year 2023 story."

The $14.5 billion market cap device maker noted sequential improvement in both global revenue and patient utilization within the quarter, which suggests that it's likely to hit its forecast for full-year growth in the 17% to 22% range. While the company's price-to-sales ratio of 17.2 is a bit more than the P/S of 13.3 of rival heart valve replacement maker Edwards Lifesciences (EW 1.37%), Abiomed has a higher expected growth rate for the year ahead (20% vs. 15%), and a higher gross profit margin (81% vs. 77%), so the premium valuation seems warranted.

While Abiomed appears unlikely to deliver markedly higher growth rates anytime soon -- based on the fact that it will be at least two years until the results of Protect IV study are released -- I think the combination of further expansions into the Impella's current addressable markets, the potential for the Breethe system, and the outlook for continued innovations with Impella Connect will position the company to continue providing steady returns to healthcare investors.