Please ensure Javascript is enabled for purposes of website accessibility
Log In Help Join The Motley Fool
Free Article Join Over 1 Million Premium Members And Get More In-Depth Stock Guidance and Research
By Lou Whiteman - May 5, 2021 at 9:41AM

Jeff Bezos' Blue Origin is expected to open up ticket sales for trips on its New Shepard spacecraft, and its website said that details of its commercial offering would be shared today. Reuters reported the company will announce the cost of a ticket, the timing of the first flight, and other details about its space tourism plans. 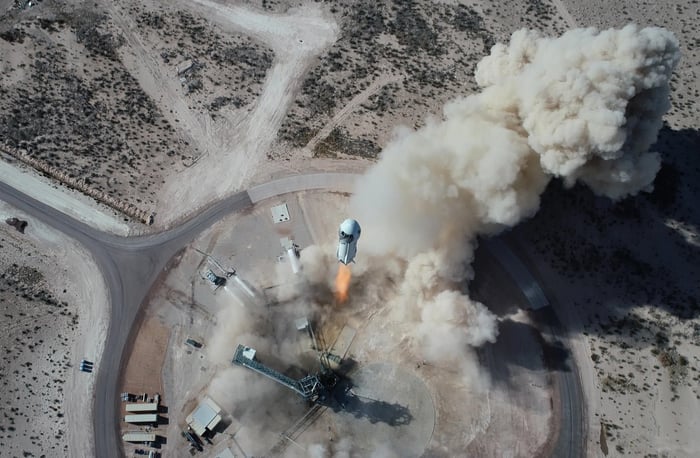 Blue Origin's tourism plans have been a closely guarded secret for years, but Reuters in 2018 said that the company planned to charge at least $200,000 per seat for a suborbital trip into space. The offering would compete directly with Virgin Galactic, which has a waiting list of consumers interested in paying about $250,000 for a brief journey into the stars.

Virgin Galactic had hoped to be flying tourists already, but its current plan is to begin service in 2022. Investors will get an update on its progress on May 10 when the company announces quarterly earnings.

The New Shepard is designed to fly six passengers about 100 kilometers above the Earth, high enough to experience weightlessness and see the curve of the planet.

In addition to Virgin Galactic and Blue Origin, Elon Musk's SpaceX also plans to launch civilians into space in the years to come.