Please ensure Javascript is enabled for purposes of website accessibility
Log In Help Join The Motley Fool
Free Article Join Over 1 Million Premium Members And Get More In-Depth Stock Guidance and Research
By Adria Cimino - May 5, 2021 at 6:30AM

Ocugen may be able to handle one of the biggest challenges facing vaccine makers.

A year ago, Pfizer (PFE -1.30%) and Moderna (MRNA 2.42%) were working on bringing their coronavirus vaccine candidates to market. Ocugen (OCGN -0.70%) was focusing on something completely different: gene therapy for eye diseases that cause blindness. No one expected this clinical-stage company to take part in the vaccine race.

Fast-forward to December: That's when Ocugen signed on to co-commercialize Bharat Biotech's coronavirus vaccine candidate in the U.S. Ocugen will keep 45% of any profit in the U.S. Since then, the shares have soared. And investors have watched Ocugen's every step. Right now, the latest step is a report about the vaccine candidate's performance against coronavirus variants of concern or interest. Can this help Ocugen eventually leap ahead of its bigger rivals? Let's take a closer look. 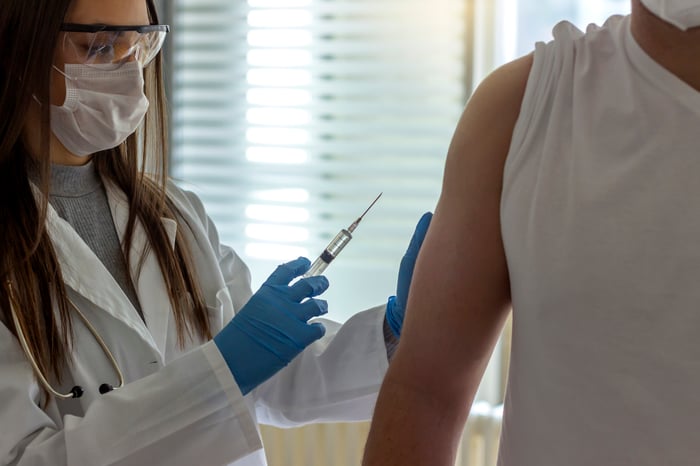 Ocugen said this week that Covaxin -- Bharat's candidate -- neutralized the Brazil variant, the U.K. variant, and the India "double mutant" variant in a study. Scientists at the Indian Council of Medical Research performed in vitro tests using sera from Covaxin-vaccinated individuals. This is clearly important news -- especially considering that new strains have gained ground around the world.

India is currently vaccinating with Covaxin; Bharat said it's administered the investigational product to "several million" people there. The country granted the vaccine emergency authorization earlier in the year -- even before Bharat generated phase 3 data. The latest phase 3 data show the vaccine is 78% effective after the second dose.

Where do Pfizer and Moderna stand in terms of variants? They both have demonstrated efficacy in vitro against the U.K. and South African strains. Still, they both are investigating booster shots to increase immune response and better handle new variants. As for the Indian variant, it looks like Pfizer can do the job. The CEO of Pfizer's partner BioNTech told CNBC last week he's confident the vaccine can beat the Indian variant. Moderna's CEO told The Financial Times that he's still waiting for data on the Indian variant.

It's great news that Covaxin can neutralize specific strains. But at the pace new variants of interest are emerging, a vaccine or booster must address more than one -- or the company must be able to quickly adapt a booster to address that new strain. And that's why Pfizer and Moderna remain my top choices when it comes to handling variants.

These competitors use mRNA technology: Messenger RNA instructs the body to make a viral protein, then the body mounts an immune response. Making mRNA vaccines is known to be quick. That's because researchers don't have to produce weakened virus, as they would when making a traditional vaccine.

So, makers of mRNA vaccines likely can update their vaccines or boosters more quickly than those using more traditional technologies. Covaxin is an inactivated vaccine -- it uses dead virus to stimulate immune response.

It's unlikely Ocugen's Covaxin can knock out big players like Pfizer and Moderna. But could it carve out its own share of the market? I'm skeptical here too, and here's why: President Joe Biden's administration has purchased enough doses of vaccine for all Americans -- mainly from Pfizer and Moderna, but also from Johnson & Johnson. In fact, now the president is talking about sending extra doses to other countries. That makes it hard to imagine the U.S. ordering a large number of doses from a newcomer. And Ocugen's deal with Bharat applies to U.S. sales only, so it will depend on winning orders in the United States.

Of course, Ocugen hasn't yet secured authorization for Covaxin in the U.S. Ocugen said this week that it's preparing an Emergency Use Authorization request.

More room in the future?

If we look at a market entry farther down the road, there may be a bit more room for new players. Ocugen doesn't have to be a major player to generate revenue from Covaxin, and use it to fund the development of its gene-therapy programs.

Meanwhile, Ocugen shares have surged -- greatly surpassing the performance of Moderna and Pfizer year to date: 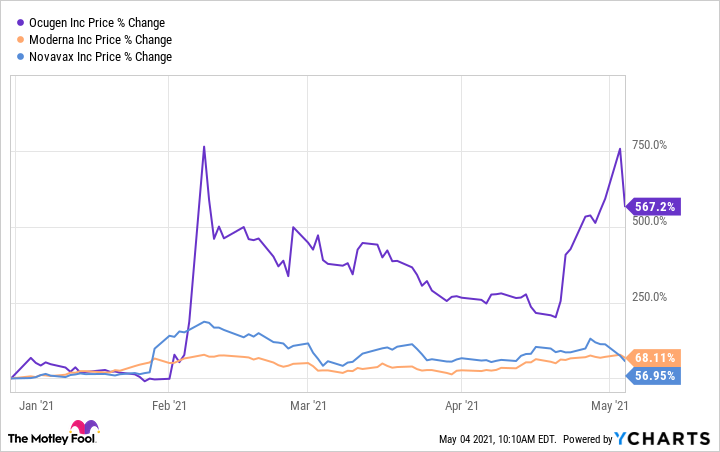 And any further progress toward authorization in the U.S. could push the shares even higher. Investors have regularly rewarded Ocugen with major one-day gains on Covaxin news.

But this pattern of share gains doesn't change my stance on Ocugen stock. There's still way too much uncertainty regarding the biotech company's potential to take share in a market dominated by Pfizer and Moderna. And that's why I worry about the stock's prospects over the long term.