Please ensure Javascript is enabled for purposes of website accessibility
Log In Help Join The Motley Fool
Free Article Join Over 1 Million Premium Members And Get More In-Depth Stock Guidance and Research
By John Rosevear - May 5, 2021 at 3:03PM

The company is on track to hit its post-merger profitability target, it said.

Stellantis (STLA -3.65%), the automotive giant formed by the merger of Fiat Chrysler Automobiles and PSA, the parent company of Peugeot, reported that its revenue and total vehicle shipments grew in the first quarter of 2021 despite the impact of an ongoing global shortage of semiconductors.

The company said it expects the chip shortage to worsen in the current quarter before easing somewhat in the second half of 2021.

A note about Stellantis' quarterly report

We should note up front that this wasn't a typical "earnings" report. Like some other European companies, Stellantis plans to report its earnings and profits semiannually, rather than quarterly.

But because it has many U.S. investors, the company provided a detailed update on its revenue and business results, with "pro forma" year-ago figures for comparison. ("Pro forma" figures are close approximations of the results that would have been reported had FCA and PSA been merged all along. They're intended to help auto investors understand how the company is performing, and to provide a basis for comparison as we go forward.)

Long story short: Stellantis didn't tell us what its profits and margins were in the first quarter. But it shared quite a bit of other information, and I've included the highlights below. Note that all of the numbers I've included here are pro forma, as provided by Stellantis, unless otherwise noted.

One more thing: Chief Financial Officer Richard Palmer said that Stellantis is ending its deal to buy European emissions credits from Tesla (TSLA -2.05%), as it now expects to sell enough zero-emission vehicles to meet regulatory standards on its own. The move will save the company about 300 million euros ($360 million) per year, roughly two-thirds of which would have gone to Tesla, Palmer said.

Looking ahead: Stellantis' guidance for 2021

The company reiterated its full-year margin guidance: It still expects its operating margin (excluding the effects of one-time items) to come in between 5.5% and 7.5%, assuming no new significant COVID-19-related lockdowns in its key markets.

Finally, Stellantis said that it will present more details around its electric-vehicle plans at an "Electrification Day" on July 8, and it will report its full first-half financial results on Aug. 3. 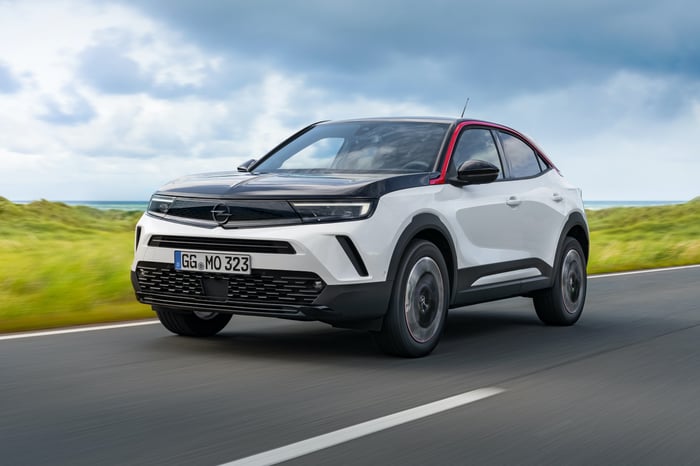 Here are the key pro forma figures provided by Stellantis in its first-quarter report. Note that all financial figures are in euros. As of May 5, 1 euro = about $1.20.

Data source: Stellantis. Shipments and vehicles in inventory are rounded to the nearest thousand.