Please ensure Javascript is enabled for purposes of website accessibility
Log In Help Join The Motley Fool
Free Article Join Over 1 Million Premium Members And Get More In-Depth Stock Guidance and Research
By Dan Caplinger - May 6, 2021 at 5:05AM

Markets were resilient, but these two stocks took some company-specific hits.

The stock market had another topsy-turvy day on Wednesday, with major market benchmarks getting pushed and pulled in both directions at various points. Investors remain concerned about the potential for inflation forcing the hand of the Federal Reserve, but they're also upbeat about the prospects for economic recovery and generally strong earnings from corporate America.

Wall Street was once again mixed on Wednesday, continuing a pattern that includes a lack of direction in major market benchmarks. The Dow Jones Industrial Average (^DJI 0.08%) climbed to all-time record highs, while the S&P 500 (^GSPC -0.07%) treaded water amid downward pressure from the tech stocks that make up such a large portion of the Nasdaq's constituency.

Shares of Peloton Interactive dropped 15% on Wednesday. The maker of interactive fitness equipment changed its stance on safety concerns about its Tread and Tread+ treadmills, moving forward with plans to implement a full recall of the products.

The U.S. Consumer Product Safety Commission called for a recall a couple of months ago, following the death of a child. The agency noted reports of numerous injuries involving children and pets getting tangled and stuck underneath the treadmills. 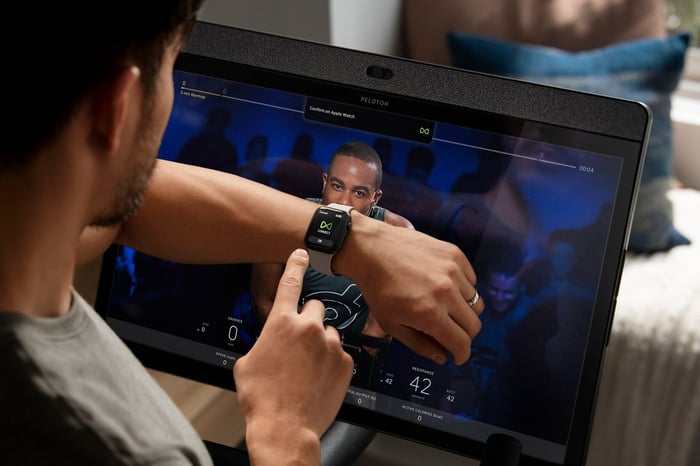 Peloton initially resisted the calls, arguing that it should be sufficient for customers to follow safety instructions that urged them to keep children and pets away from equipment and take steps to ensure proper safety-key handling when the treadmills weren't in use. However, CEO John Foley admitted that Peloton "made a mistake in our initial response" and now plans to recall more than 130,000 units.

It remains to be seen how many customers choose to take up Peloton on its offer for a full refund for the treadmills. Given the difficulties that Peloton has already had meeting demand for delivering new devices, the recall couldn't have come at a worse time for the company.

Shares of Zillow Group initially gained ground following the company's first-quarter financial report from Tuesday afternoon. By the end of trading Wednesday, however, Zillow shares were down 7%.

Zillow offered some mixed results. Certain parts of its business did extremely well, including its internet, media, and technology segment, which saw revenue gain 35% from year-ago levels. Zillow's mortgage business also did extremely well, with sales soaring 169% year over year.

However, some investors weren't pleased to see numbers from the Zillow Offers i-buying segment fail to post impressive growth. Sales from the segment were down 9%, compared to the first quarter of 2020, and the company purchased just 1,856 homes while selling 1,965 using its newfound functionality. After launching plans to use its Zestimate valuations as initial offers, some investors had expected a faster uptake from the service.

In the long run, CEO Rich Barton hopes that Zillow will become a one-stop shop for an entire generation of new homeowners to get mortgages, work with a real estate agent, and make quick transactions on the homes they want. If Zillow can make it easier for people to enjoy homeownership without finding it difficult to move due to high transaction costs and difficulties in selling current homes, it would mark an important step forward for the entire economy.

Should You Buy 2 of the Worst-Performing Nasdaq Stocks in 2022?

A Peloton Bailout Could Start a Big Nasdaq Stock Trend

Why Peloton and TaskUs Led the Nasdaq Lower Again Thursday

2 Stocks That Jumped Friday Despite a Terrible Market

In Turbulent Markets, Can This Beaten-Down Stock Get Itself Back in Shape?