Please ensure Javascript is enabled for purposes of website accessibility
Log In Help Join The Motley Fool
Free Article Join Over 1 Million Premium Members And Get More In-Depth Stock Guidance and Research
By Jon Quast - May 7, 2021 at 3:24PM

Its direct-to-consumer business is skyrocketing, and that's good news, considering its getting new competitors in stores.

Shares of cross-border payment company MoneyGram International (MGI -0.57%) surged on Friday after reporting financial results for the first quarter of 2021. The stock actually started the morning flat before steadily climbing and peaking around 1 p.m. EDT. It's pulled back some, but as of 2:40 p.m. EDT, MoneyGram stock was still up 21%.

MoneyGram has agents in brick-and-mortar locations waiting to help customers with their cross-border payments. However, it also deals with consumers directly through its MoneyGram Online (MGO) services. Revenue in Q1 was only up 3% year over year when you account for currency fluctuations. However, MGO revenue was up 119%, reaching record highs for customers and transactions. 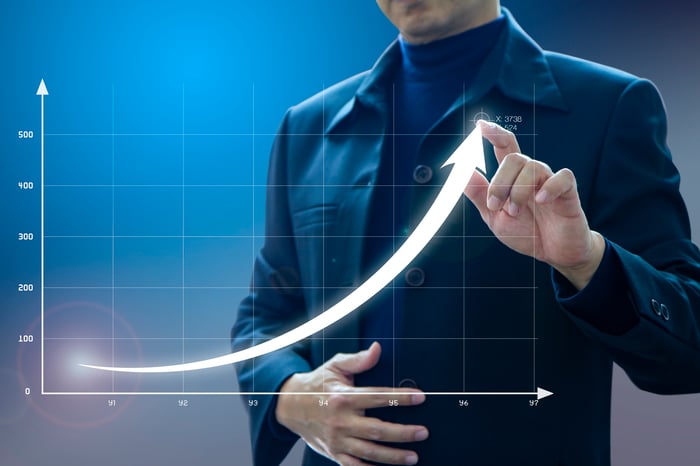 Growth in MGO is probably contributing to the market's enthusiasm for MoneyGram stock today. However, shareholders are likely also relieved to hear that its issue with the Department of Justice is nearing resolution. In short, MoneyGram has been certified as compliant with money-laundering regulations, and the matter is on the path toward being dismissed within the next seven weeks.

For the upcoming second quarter, MoneyGram management expects to generate revenue of $315 million to $325 million -- a modest sequential improvement. However, Walmart has decided to allow competition (Western Union) with MoneyGram in its stores, and this is something management mentioned as causing some uncertainty going forward. It underscores the need for this financial stock to continue growing its direct-to-consumer MGO business in case this increasing competition starts stealing some of its brick-and-mortar business.