Please ensure Javascript is enabled for purposes of website accessibility
Log In Help Join The Motley Fool
Free Article Join Over 1 Million Premium Members And Get More In-Depth Stock Guidance and Research
By Howard Smith - May 7, 2021 at 12:14PM

Nikola told investors that it was on track to complete previously announced goals in its quarterly update.

Nikola basically confirmed progress on several fronts for its business. One reason for the positive market reaction was the expectation that the start-up company might use the global semiconductor shortage or another excuse to explain a further setback in its plans. But it seems the company's manufacturing plant construction is on track, and Nikola reiterated that it plans to ship the first Nikola Tre battery electric vehicles (BEVs) to customers during the fourth quarter of 2021. 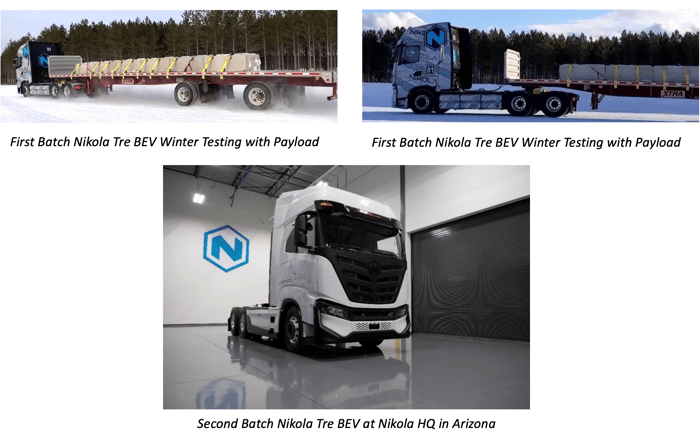 Yesterday, Nikola announced a letter of intent from trucking company Total Transportation Services for 100 of the company's BEV and fuel-cell electric vehicle semi-trucks. Today's progress report supported that news as the company continues commissioning the first batch of five Tre BEVs and has another eight already built at Nikola's Ulm, Germany facility. They are in various stages of transit or testing, with another nearing completion and expected at the Arizona facility by the end of this month.

But just building and commissioning trucks isn't what this stock is valued for. The plan for a hydrogen-fueled product and the associated infrastructure is critical for Nikola to ultimately succeed. In today's report, the company said it expects to break ground on its first commercial hydrogen station this year, and to name additional hydrogen infrastructure and ecosystem partners. Investors will want to follow developments in that area for signs of long-term value.